Posted in: Contests by Gino Sassani on December 25th, 2015 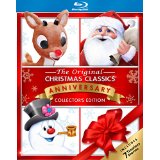 On The First Day Of Christmas Dreamworks Gives To You:

The Original Christmas Classics Anniversary Collector’s Edition. This DVD collection features some of the biggest Christmas Classics from the vintage days of the television specials. In one collection you’re going to get 7 all-time classic specials. We’re talking Rudolph The Red-Nosed Reindeer and Frosty The Snowman. Those are two of the best there ever was. The set also includes the rare Santa Claus Is Coming To Town. In this day of super heroes this is one of the earliest. It’s Santa’s origin story told in wonderful stop-motion. I haven’t seen it since I was a kid. What a blast to share it with my family. The set also includes The Little Drummer Boy, Cricket On The Hearth which stars Roddy McDowall and Danny Thomas, Mr. Magoo’s Christmas Carol and Frosty Returns. You want this collection on your shelf before the next Christmas season rolls around. Now you can win it on DVD thanks to our Christmas buddies at Dreamworks.

Gino Sassani is a member of the Southeastern Film Critic's Association (SEFCA). He is a film and television critic based in Tampa, Florida. He's also the Senior Editor here at Upcomingdiscs. Gino started reviewing films in the early 1990's as a segment of his local television show Focus. He's an award-winning recording artist for Omega Records. Gino is currently working on his 8th album Merchants & Mercenaries. Gino took over Upcomingdiscs Dec 1, 2008. He works out of a home theater he calls The Reel World. Favorite films: The Godfather, The Godfather Part II, The Body Snatcher (Val Lewton film with Karloff and Lugosi, not the pod people film), Unforgiven, Gladiator, The Lion King, Jaws, Son Of Frankenstein, The Good, The Bad And The Ugly, and Monsters, Inc.
Joy 12 Days Of Christmas Giveaways – Day Two: Duck Dynasty: Season 4-6 From A&E/History/Lionsgate