Posted in: The Reel World by Archive Authors on December 25th, 2015 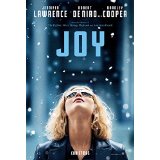 Joy is the name of a person, not a state of mind. Joy Mangano is apparently not an easy person to know, but she did submit to a long series of conversations with brilliant writer/director David O. Russell. I say David is brilliant because he is, to me, the single most indispensable artist working today. He is able to do things that no one else can do. He makes comedies, but only in the broadest sense of the word. He takes a subject that may seem insignificant and puts it through a mad process like Dr. Frankenstein until something magnificent comes out. The process seems like a whirlwind for whoever is caught up in it. Joy is a movie that blew me away, and that was after having been blown away by almost all of his films, but especially Silver Linings Playbook, The Fighter, and American Hustle. The actors always seem to be doing their best work when he works with them. Jennifer Lawrence says she hopes she always works for him and has already won a supporting actress Oscar working for David. Jennifer is the center, driving force and titular character this time out. She is playing an inspiration of a real person, but not a real person, because that’s what David wanted.

Joy is like the Citizen Kane of women’s movies. It portrays that person who is a mother and a daughter and wage earner and all-around fixer of every problem. She is always open to fixing problems and compromising to make things work. She keeps going no matter how overwhelming the struggle she faces becomes. She is tireless and forgiving and hopeful, but what she is above everything else is a person with brain like a sponge. Joy Mangano in real life invented the Miracle Mop along with a hundred other patents. Joy also thoroughly understood everything about a mop, because she used it every day. She found success on QVC and later HSN, but this process is harrowing and somewhat dizzying. The film is framed with soap opera segments featuring the legendary Susan Lucci as a device to comment on the somewhat unreal life of any woman and especially Joy. There is an inherent instability in Joy’s life that is illustrated by the fact that her father and ex-husband are both forced to move into the somewhat run-down house. Joy is the one who usually has to do the plumbing. This household includes her mother, grandmother, and two young kids.

Robert De Niro, Virginia Madsen, Edgar Rameriez, Bradley Cooper, Diane Ladd, and Isabella Rosselini are among the key players in this whirlwind story. I mentioned Citizen Kane earlier because in some ways it is about a mysterious but driven character who follows a scary trajectory of fame and fortune with all the rollercoaster dips and curves on the way. It is so rare to see a woman in this kind of role, and it is wonderful to see. I don’t know if the real Joy Mangano is a good person, but the Joy in this film is a joy to watch. Her story is the definition of inspirational, but it hints at a future in which power and money will eventually corrupt. It is tantalizing, and it is the feel-good movie of the season, if your idea of feeling good is working hard and becoming a big success.