Posted in: Disc Reviews by Archive Authors on December 25th, 2015 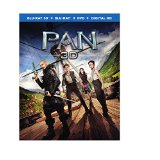 Pan is a very big and expensive movie, so when you buy your ticket you are getting a lot for your money. Most movies are not for everyone, but it is safe to say that an expensive movie will offer more entertainment value than an inexpensive or cheap movie. Pan was also put together by an award-winning team of respected filmmakers who have been very successful in the past. That is also a good bet when you are buying a ticket. Pan is an expansion of the story of a beloved children’s classic, Peter Pan. Again, you can’t go wrong there. In fact, it is mostly new material that serves as a prequel to the existing story where Captain Hook is basically a nice guy, and there is a whole new villain instead. The new villain, Blackbeard, is played with tremendous gusto by Hugh Jackman. Again, this is a good thing. Rooney Mara (nominated this year for numerous awards for the film Carol this year) is Tiger Lilly. Garrett Hedlund is the young Hook. Amanda Seyfried is Mary, the mother of Peter. Promising young actor Levi Miller is Peter Pan. Peter starts out in a cruel London orphanage but is kidnapped by the evil Blackbeard and his pirates in his giant floating pirate ship and taken to a place beyond space and time which you probably know as Neverland. Peter is eventually rescued by the young Hook, but the story beyond that gets difficult to summarize. The movie is an amazing visual experience and well worth watching.

Now the bad news. The film was not well received by most critics. The reason is because the film has some issues that might distract from the complete enjoyment that the $150 million budget might lead you to expect. One problem is that the original Peter Pan is perceived as having racist elements, especially with a character like Tiger Lilly. The producers tried to avoid that by hiring Mara, a white actress. Then there was a petition circulated that Hollywood didn’t hire enough actors of color. It seems like a no-win situation to me. You can’t have it both ways, people.

Still, I don’t think that simple fact sabotaged the movie. The story was somewhat dense and confusing, partly because this is all new material. It was not a completely easy fit to the traditional Peter Pan. Also, the Blackbeard character was pretty frightening and evil, which might be a bit much for small children. Then Hook was deliberately portrayed as being a somewhat conflicted and confused character with a bizarrely affected vocal manner. Hook is showing hints of the flaws in his character which will turn him dark and nasty as he grows older. Clearly, there were big hopes for this to be a multi-film franchise.

I think the film is spectacular and ambitious. There are so many dreary, boring movies that get a pass because they aren’t challenging, difficult, or objectionable in any way. That is the kind of film that I think is a waste of time.

Pan is presented in an aspect ratio of 2.39:1. The high-definition 3D image is arrived at using the standard duel MVC codec at an average 25/10 mbps. Whatever you might think of the film itself, there is little argument that this 3D high-definition image presentation is incredibly sharp and exploding with vivid colors. The London scenes are appropriately saturated with grim and dark colors, while Neverland jumps out at you with brilliant primary colors. Much as the original Wizard of Oz used black and white contrasted with Technicolor, Pan offers quite a stark contrast in the use of color here. The detail is quite extraordinary. Black levels are near perfectly deep and dark with plenty of shadow definition. The 3D delivers nice depth and takes advantage of clever cinematography to wrap this image about you for one of those indescribable film-watching experiences. This image presentation is a complete delight in every way.

The Dolby Digital Atmos audio defaults to an expressive 7.1 presentation. The audio isn’t quite as captivating as the image, but there is nice attention to detail that completes the immersive atmosphere. Dialog is always clear while the score punches through with its dynamic energy. Surrounds are rather aggressive, particularly in Neverland, as it should be. Subs deliver some depth and range to make this all more of an experience than merely watching a movie.

There is an Audio Commentary by director Joe Wright. There is a bit of dead air here as Wright appears to deliver the commentary in energetic spurts. He’s frank about some of the film’s failings and offers plenty of insight into the evolution of many of the characters and places throughout the film.

Never Grow Up – The Legends Of Peter Pan: (10:50) Like all of the features on this release, the piece is presented as if it were told as a fairy tale. We get some history of the Peter Pan story with photos from the 1904 stage production. Cast and crew answer the question: what is Neverland?

The Boy Who Would Be Pan: (6:06) More 1904 production stills and various illustrations from versions of the book highlight this look at the Peter Pan character. There’s a focus on casting the role and some nice conversations from young actor Levi Miller on getting the part. Cast and crew this time ponder the question: who is Peter Pan?

The Scoundrels Of Neverland: (5:49) This one looks at Blackbeard, and, of course, features a lot of Hugh Jackman. There’s also a look at his pirate crew. You’ll find some concept art and again images from various incarnations of the story.

Wondrous Realms: (5:01) This one is a quick version of the film’s story told as a fairy tale and focusing on the important places in the story like Blackbeard’s ship and Neverland itself.

Pan isn’t a waste of time, but I will give it 3 out of 5 stars just to acknowledge that some people may find it difficult to appreciate.