Posted in: No Huddle by Archive Authors on December 30th, 2015 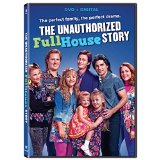 Does anyone remember Full House? Of course you do. It was recently given a kind of reboot which is supposed to debut on Netflix in 2016. That’s pretty good for a show that debuted in 1987. It ended in 1995 with 192 episodes. That is a very successful run, and it launched the Olson twins as mega-moguls. The twins apparently no longer act, so they will not be in the reboot. I hear they are very, very rich ($300,000,000?). I also hear that Ashley might have Lyme disease, which is a long term ordeal and difficult to overcome. Apparently The Unauthorized Full House came about because Lifetime had success with The Unauthorized Saved by the Bell Story. I will say that I expected juicy dirt about the various cast members. It isn’t particularly juicy, but it is full of embarrassing details on just about everyone. It is also full of a fair amount of inaccuracies, some due to legal constraints (such as not being able to use sets, theme songs, catch phrases, etc.). It’s more of a behind-the-scenes look at the struggles of producing a network television show. There have been a few alleged scandals, but they did not make the cut of this somewhat friendly look at the show. The original cast included John Stamos, Lori Loughlin, Bob Saget, Dave Coulier, Jodie Sweetin, Candace Cameron, Mary-Kate and Ashley Olson. The actors portraying them are almost entirely unknown faces. The only cast member who I even remotely recognized was Peter Deluise, who plays Stamos’s father. Stamos goes to the pizzeria that his father owns looking for advice about his faltering career. That all changes when he gets the show. We get to see all the cast members as they fret about their futures, but once the show takes hold, we focus on some personal tragedies like both Saget and Coulier suffering the deaths of their sisters. The show’s creator, Jeff Franklin, is depicted as a somewhat stressed out killjoy, constantly having to watch that Saget won’t say bad words in front of the kids. The show’s run is dutifully handled year by year even going to the effort of hiring new actors for the child actors as they grow. I may be giving the impression that I don’t know why they bothered.

The entire effort seems so lackluster and generic that it might have seemed more in place if had been broadcast back in 1987 instead of 2015. Whatever chemistry the original cast may have had is certainly not translated into this version. As a tribute, it seems well-intentioned but substandard. I would say if you are a huge fan of the original series, you might want to see this. If you are a fan of television, in general, you might find some behind-the-scenes information somewhat useful. But if you have any interest in a quality program that stands on its own, it is completely and totally useless. It is boring, dull, and sleep-inducing. The original Full House was probably something of a retread of routine sitcom situations, so this movie is a retread of a retread.