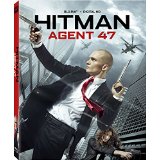 Well, partners, it’s time for the final Tuesday Round Up of 2015…and we’ve got plenty of fireworks before year’s end! We’ll be setting our sights on Hitman: Agent 47, courtesy of Fox. Lionsgate pulls one last major Heist, and Image Entertainment cuts straight to the Bone Tomahawk. Finally, the end of the year also means it’s Showtime! Reviews for two of the cable channel’s series are on the way: Warner Bros. is utterly Shameless: Season 5, while CBS/Paramount reacquaints us with Ray Donovan: Season 3.

This is actually the fifth Tuesday of the month, which means you fine people are getting an extra chance to win free stuff. Once a month we’re going to give away a surprise DVD title from our archives to a lucky winner who comments in our weekly Round-Up posts. All you have to do is comment in a Round-Up post — like this one! — and tell us which of the featured titles you’re most curious to read about. (Quick reminder: You’re not telling us which title you’d like to win; your free DVD will be a surprise.)

CONTEST IS NOW CLOSED: Congrats to Vicki Wurgler, who won Field of Lost Shoes on DVD.