Posted in: Contests by Gino Sassani on December 30th, 2015 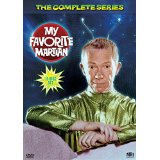 On The Sixth Day Of Christmas MPI Media Group Gives To You:

My Favorite Martian The Complete Series. This is quite the little treasure we have here. MPI has put together an impressive list of extras and every episode of the Bill Bixby / Ray Waltson classic. Long before The Avengers Bixby was The Incredible Hulk. (Okay, he was Banner and Lou Ferrigno was the big green guy). Long before Mork arrived from Ork Uncle Martin arrived from Mars and into the life of newspaper reporter Tim O’Hara. We’re talking hours of memories here that you really want on your video shelf. This might well be one of my favorite giveaways.

Gino Sassani is a member of the Southeastern Film Critic's Association (SEFCA). He is a film and television critic based in Tampa, Florida. He's also the Senior Editor here at Upcomingdiscs. Gino started reviewing films in the early 1990's as a segment of his local television show Focus. He's an award-winning recording artist for Omega Records. Gino is currently working on his 8th album Merchants & Mercenaries. Gino took over Upcomingdiscs Dec 1, 2008. He works out of a home theater he calls The Reel World. Favorite films: The Godfather, The Godfather Part II, The Body Snatcher (Val Lewton film with Karloff and Lugosi, not the pod people film), Unforgiven, Gladiator, The Lion King, Jaws, Son Of Frankenstein, The Good, The Bad And The Ugly, and Monsters, Inc.
Unauthorized Full House Story Bone Tomahawk (Blu-ray)