Posted in: Disc Reviews by Gino Sassani on January 6th, 2016 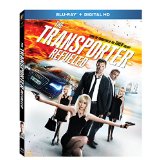 Between 2002 and 2008 Jason Statham made a name for himself playing Frank Miller in three Transporter films. Miller was a former special ops expert who became a high-end black market transportation expert. He used his skills to transport anyone or anything from point A to point B for a hefty fee. He had a few rules that governed his business: the deal never changes once it’s made, no names, and he doesn’t want to know what he is transporting. The business made for some nice action films that gave Statham a chance to show off that particular skill set. The films brought in a modest box office, averaging around $35 million each. It was barely enough to keep three films going in the franchise. It all ended in 2008, and Statham moved on to bigger and sometimes better things. That should have been the end of the story. It isn’t.

Editor-turned-director Camille Delamarre decided to take a run at a reboot, of sorts. Game of Thrones actor Ed Skrein takes over the Frank Miller role, and the film picks up the character already established. It’s a grey area on what to call Transporter: Refueled. It’s not entirely a reboot. The character is established, as are the rules and general formula. But it is a rather new take on the material. Unfortunately, there’s not a lot of heart in this attempt, and the wheels might have gone completely flat on this franchise.

The film begins in 1995 with several girls being sold into a life of prostitution. 15 years later four of the girls band together to get some payback on the man who forced them into the sex trade. The group’s leader is Anna (Chabanol). She hires Frank to transport herself and two packages. The two packages turn out to be two other girls, played by Tatiana Pajkovic and Yu Wenxia. Frank considers it a breach of the first rule when the packages turn out to be girls. He tries to get out of the deal, but the girls bought an insurance policy. They’ve kidnapped his father, played by Ray Stevenson. Before long Miller and his father are involved in a plot to rob all of their target’s associates and frame him for the betrayal. Obviously, the plan hits more than a few snags along the way.

The first problem is Skrein in the lead role of Frank Miller. Delamarre attempts to give him a more polished look than Statham had. There’s an obvious attempt to channel James Bond, right down to the watch. But all of the British spy suave never comes off quite right, and the result is an actor who’s pretty bad as an action lead. The stunts are a weak link here. That’s bad if you’re selling a film on its action. To hide the limited abilities of Skrein, there are some awfully awkward cuts and fights that look too stiffly staged to pump up the adrenaline. The truth is that Skrein isn’t near the actor Statham is, and that’s the kind of statement I never thought I’d be making.

The girls are another problem. There are too many plot holes that are covered with staged poses and direct rips from other films. The girls perform their crimes in these horrible blonde wigs that are stolen straight out of Brian De Palma. The film quickly moves from set piece to set piece with little to connect one scene to another. Instead we’re given a series of vignettes that don’t come together to tell any kind of compelling story. Delamarre is in over his head, and when he’s lost he just repeats something he’s seen before but without any real context. What remains is a movie that appears hodgepodged together out of the scraps of better films.

There are two positives to be found here. While the action scenes are horrible, the car chases are pretty nicely done. One features a car racing through the inside of an airport terminal. Here’s where the only shots of originality appear. The stunt work is some of the best and surpasses anything I’ve seen out of the recent Fast And Furious film. If only Delamarre had found a way to connect all of this to a solid backbone.

The other positive is the presence of Ray Stevenson. He steals every scene in the kind of performance that harkens back to Sean Connery’s portrayal of Indiana Jones’s father in Last Crusade. He’s working much harder than anyone else here, and it’s obvious he’s trying to bring Skrein’s game up a bit. Unfortunately, there’s only so much he can do. In the end he’s underused even with a generous amount of screen time and is the most interesting character on the board.

Transporter: Refueled is presented in its original aspect ratio of 2.39:1. The 1080p image is arrived at with an AVC MPEG-4 codec at an average often over 40 mbps. The high-definition image presentation delivers even if the film does not. The image is razor sharp but hampered by the overuse of color correction. The use of blue or yellow hues to shade an image can be a huge distraction. It softens the black levels and takes away all of the advantages of a high bit rate and detailed image. The best shots are the exteriors, particularly the car chases. Colors pop more and lighting appears more natural.

The DTS-HD Master Audio 5.1 is an aggressive mix to be sure. You will be adequately bombarded by sound, particularly during the action scenes. Sub levels are quite dynamic and add wonderful depth to the audio presentation. Dialog is fine, and the score sometimes pounds a bit excessively. Still, you couldn’t ask for a more dynamic presentation.

Frank Miller – The Reluctant Hero: (9:18) Like all of the extras, this behind-the-scenes feature is too stylized to be enjoyable. The overuse of pounding score and flashy visual cuts takes your attention away from anything the cast and crew have to offer here. Someone obviously doesn’t think you can watch for nine minutes without a ton of eye and ear candy.

The Coeur Brise – Les Femmes of Refueled: (5:32) This feature continues the ultra-stylized distractions while attempting to focus on the women of the film.

Perhaps it was the run of box office hits from Fast And Furious that made anyone think this film could be resurrected from a soft franchise to tart with. Whatever the reason, it’s terribly misguided, and the result is little better than a direct-to-video follow-up that ended up at the box office instead. It pulled in less than half of what the lowest original take was and likely is the last we’ll see of The Transporter. “That’s not my problem.”

Gino Sassani is a member of the Southeastern Film Critic's Association (SEFCA). He is a film and television critic based in Tampa, Florida. He's also the Senior Editor here at Upcomingdiscs. Gino started reviewing films in the early 1990's as a segment of his local television show Focus. He's an award-winning recording artist for Omega Records. Gino is currently working on his 8th album Merchants & Mercenaries. Gino took over Upcomingdiscs Dec 1, 2008. He works out of a home theater he calls The Reel World. Favorite films: The Godfather, The Godfather Part II, The Body Snatcher (Val Lewton film with Karloff and Lugosi, not the pod people film), Unforgiven, Gladiator, The Lion King, Jaws, Son Of Frankenstein, The Good, The Bad And The Ugly, and Monsters, Inc.
Mercury Plains The Nanny: Season 5