Posted in: No Huddle by Jeremy Butler on January 8th, 2016 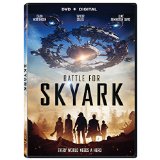 Battle for Skyark is a hero’s journey tale without question, as the main character finds himself thrust into the said role of protecting a ragtag group of kids from perceived monsters. Sounds like a lot of responsibility for a kid, if you ask me. The type of thing that sends a person into a dark corner and makes them ball up in the fetal position. You don’t get that, exactly, but you get something similar. Rags witnesses the murders of his father and faces his exile from Skyark, the city created above the Earth following an invasion by an alien race. Upon his arrival on the abandoned planet, he finds himself thrown into the role of savior due to a prophecy which states that the boy who bears thirteen shadows (cuts on the arm sustained during the expulsion process) will lead a group of resistance fighters and take control of Skyark. If that is not enough, he has the more pressing issue of protecting the group from the infestation of parasitic aliens which have turned their human hosts into cannibals.

At first enjoying the attention that comes with being “The Thirteen,” the novelty of the position quickly wears off during the first of attack of the labeled “Monsters.” With no battle experience and never having to defend himself, Rags believes that it is all a mistake and he is not who the group believes him to be. As the obstacles continue and with lives being in his hands, Rags will have to find the strength to be become the person that he is destined to be.

This was a truly enriching story, I must say. It’s been a while since I got to witness a hero’s journey film, and Battle for Skyark hit all the points that I anticipated it to without becoming boring and dreary. A particular interest for me was watching Rags struggle with the assumed role; the actor was very believable in this regard, displaying the necessary cowardice (harsh word, but fitting) of someone not up to the task. The original invasion aspect is not covered very heavily, simply a brief sequence at the beginning of the film. It provides enough information to get the idea, and a reveal later in the film clues you in more; however, I would have enjoyed a bit more of an extended sequence to provide a little more perspective. All in all, I am satisfied with what I received.

The film develops with good pacing and without deviation from the purpose of the story, keeping the audience engaged and providing no to time to grow bored with the plot. As far as acting, it does take a moment for the lead to come into his role. In the beginning, he is not very compelling and is overshadowed by a secondary character in my opinion; however, this situation is rectified rather quickly. A film intended for a younger audience, without question; however, I dare to say that adults won’t mind watching it with their family as well. Who doesn’t love a good hero’s story?

In conclusion, the tale is open-ended, so for those who love the story, there is hope for a sequel. Again this is clearly a movie for the younger generation; however, a hero’s journey is not age-specific. I’m way over the targeted demographic, and I found plenty to enjoy about the film. I imagine others will do the same. I recommend showing it to people as a confidence builder, as it shows what can be accomplished when you rise to the occasion.

Jeremy Butler is a film school graduate of the International Academy of Design and Technology. He is been writing for Upcomingdiscs since 2012; however, movies have played a big part of his life for much longer. Favorite genres include horror, science fiction/fantasy, and comedy. Favorite movies are V for Vendetta, Boondocks Saints, Kiss Kiss Bang Bang, and The Godfather.
The Revenant Experimenter (Blu-ray)