Posted in: Disc Reviews by Gino Sassani on January 8th, 2016 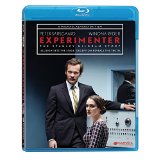 “The techniques change, the victims change but it’s still a question, “How do these things happen? How are they institutionalized?”

“I was just following orders.” It was the plea heard by too many of the Nazi war criminals during their trials following World War II. It wasn’t enough to spare them the consequences of their actions, of course. Six million people were exterminated, experimented on, or tortured. The excuse just didn’t hold water. But was it at all valid? Could an otherwise “good” person be turned into something evil just because someone in authority told them to do it? Just how far would an average human being go toward hurting another person whom they have no provocation to hurt just because they are told to do so?  These are the questions that Professor Stanley Milgram set out to answer in his controversial study in the 1960’s. The debate in the world of psychology and sociology continues to this day. Every psychology class likely includes footage from the study. The methodology and results are required study in most sociology classes. This is the subject of the Magnolia Blu-ray release Experimenter.

At first the film looks like it’s going to be a docu-drama on Milgram and his study. We see many of the participants as they are manipulated into shocking a total stranger with a heart condition, even up to potentially lethal levels. All the while the “victim” is pleading for the shocks to stop from another room. 65% went all the way to the dangerous levels simply because they were told “the experiment requires that they continue”. At least that’s what they thought they were doing. In reality, the victim was in on the experiment and was never really shocked at all. He wasn’t, but the world was shocked by the results and the ethical questions of the experiment’s methodology. That’s also where the film suddenly goes off the rails.

After several minutes of watching Milgram (Sarsgaard) conduct his experiment, what started as a pretty much straightforward movie starts to look like a psychological experiment of its own. Milgram breaks the fifth wall and addresses the viewers to explain various thoughts and points. But the weirdness doesn’t end there. At times there’s an elephant walking down the university hallways as he does so. It’s the not-so-proverbial “elephant in the room”. It doesn’t end there. Art and style choices begin to dominate more and more as the film progresses. Eventually scenes are played out against black & white stage backdrops of a living room or office. The film takes pains to create a feeling that what we are seeing is both staged and artificial. Perhaps it’s a statement about Milgram’s experiments themselves. Perhaps it’s just a director who was going more and more crazy as filming proceeded. Whatever the intention, I half expected that I would discover that I was being studied to see my reactions to the escalating madness of the movie. That doesn’t appear to be the case. Yet who knows what’s being made of these very reactions. Reviewers could find themselves quite paranoid after watching this film.

The film does attempt to bring us the aftermath of the study. Migram is treated unkindly by his peers, but it’s obvious it is the results that the field is pushing back on. The study was repeated under various conditions with pretty much the same result each time. That wasn’t good enough to keep Milgram on university staffs. Peter Sarsgaard plays him in an almost robotic fashion. He rarely shows emotion even as he’s being beaten down in his field. His delivery is analytical, and his common plea was that the results even surprised him. He wasn’t trying to prove humans would do this; he was almost trying to prove they wouldn’t. He has a very distance-like chemistry with Winona Ryder, who plays his wife. She has an almost morbid fascination with the experiment and treats it in an almost giddy childishness as he attempts to explain what he’s doing. The rest of the cast is pretty much background noise and written intentionally to be so. Again, it’s the artificial presentation rearing its head once again. There’s even a scene where Kellan Lutz plays (badly) William Shatner, who is playing Milgram in a film of the experiment. A bit interesting is another Star Trek connection, as the new Chekov, Anton Yelchin, has a very small part in the movie.

The only other exception would be Jim Gaffigan, who plays the would-be shock victim. He’s an insurance adjuster doing the gig for the money, but he’s having a blast. He’s having fun at the expense of the subjects and often mocks his own pleas for stopping the experiment during the tests. He’s the only truly animated character in the film and stands out even with a small amount of actual screen time. He becomes the only actually interesting character in the film by the time it all turns into an artsy nightmare.

Experimenter is presented in its original aspect ratio of 1.78:1. The 1080p image is arrived at with an AVC MPEG-4 codec at an average 35 mbps. There are some issues with this high-definition image presentation. It’s hard to separate what might be transfer issues with what might have been misguided style choices. The first is the lighting. It’s absolutely horrible and makes everything from colors to flesh tones look sickly pale. You’ll find an inexcusable amount of banding and digital noise throughout. It’s all muted to the point of just looking bad. There are no real textures, and detail is exclusively limited to the rare close-up shot. Wide shots look like they might as well have come from a good copy of a DVD.

The DTS-HD Master Audio 5.1 is almost entirely dialog. That is served perfectly well. It’s an intimate film loaded with confined spaces, so the tight mix is completely appropriate to the material. The music intrudes at odd places and is far from a traditional score. I’m sure the mix captures it all as it was intended…unfortunately.

The Making Of Experimenter: (5:51) Cast and crew talk about the material and the experiment at the heart of the film. Milgram’s widow also offers a few words.

Understanding Stanley Milgram: (5:33) Joel is Stanley’s brother and thinks the film did a great job of portraying his sibling. Too many unnecessary clips break up the interview piece.

Designing Experimenter: (5:10) A look at the production design and the attempt to reproduce the rooms and props from the actual footage of the experiment.

The film begins as a chilling reminder of what we’re capable of as humans under the thumb of authority even when there is no direct or implied threat of consequences for disobedience. Eventually, the film loses its effectiveness by making decidedly odd choices that only serve to distract and eventually counter its own impact on the viewer. It’s a terrible case of self-destructive behavior that destroys what value the movie might have had. Within 30 minutes Experimenter “actively becomes a bad movie”.

Gino Sassani is a member of the Southeastern Film Critic's Association (SEFCA). He is a film and television critic based in Tampa, Florida. He's also the Senior Editor here at Upcomingdiscs. Gino started reviewing films in the early 1990's as a segment of his local television show Focus. He's an award-winning recording artist for Omega Records. Gino is currently working on his 8th album Merchants & Mercenaries. Gino took over Upcomingdiscs Dec 1, 2008. He works out of a home theater he calls The Reel World. Favorite films: The Godfather, The Godfather Part II, The Body Snatcher (Val Lewton film with Karloff and Lugosi, not the pod people film), Unforgiven, Gladiator, The Lion King, Jaws, Son Of Frankenstein, The Good, The Bad And The Ugly, and Monsters, Inc.
Battle for Skyark Cooties (Blu-ray)