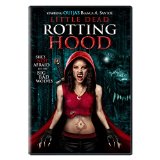 The tale of Little Red Riding Hood, like many other children’s stories, is so well known and influential that it has been reimagined time and time again. In fact, one of my favorite short stories, The Company of Wolves, is a loose adaptation of the aforementioned tale. While I can’t call Little Dead Rotting Hood a favorite, I really appreciate how they were able to create a unique story while implicitly maintaining key elements of the original tale. More often than not the important visuals and motifs are present. Unfortunately, the pacing of the events is a little slow and really makes the film feel empty.

Little Dead Rotting Hood focuses on a small town that recently sees a surge in wolf attacks on its residents. The most recent attack on Samantha (Bianca A. Santos) transforms the young girl into a werewolf-like creature. Concerned for the residents being attacked under his watch, Sheriff Adam (Eric Balfour) enlists the help of Officer Victoria (Heather Tom), the town’s wildlife expert. Soon the two begin to suspect Becky (Amy Argyle), a local animal activist with a record of violent protests, to be linked to the recent attacks. As the story progresses, Sheriff Adam begins to learn of the town’s folklore involving a bigger threat than wolves.

Again, I really did enjoy the unique elements of the story. However, the folklore of the town isn’t as detailed as it could have been, so some of the details might be a little hard to swallow, the first being a magical sword that appears only when it is crucial for a character to have it. While I appreciate the object’s significance to the plot, the lack of details in its explanation makes the object feel rather absurd. Along with the sword, the explanation of Samantha’s transformation could have been incorporated into the folklore a little more carefully. Basically, I see a lot of really great ideas within the structure in this narrative, but some key details feel more like loose threads than they do tight seams.

Little Dead Rotting Hood implicitly acknowledges and expands upon the different retellings of Little Red Riding Hood very well. Many of the original tales incorporate some facet of lycanthropy (some of the older versions see Little Red haunted by a werewolf). While modern day lycanthropy is not unique to this film, I have never seen the complexity of politics between humans and werewolves in any retelling of Little Red Riding Hood. In other words, it is not just good versus evil, and that adds to the story. There are more allusions to the famous tale, but my favorite nod involves the well-known dialog exchange, “My, what big teeth you have.” The exchange that takes place in the film is so subtle it may have even been an accident, but it works so well. The actual content of dialog is not the same, but the cadence in which the lines are delivered is spot-on. And as with the original tale, it is this dialog exchange that leads us into the film’s climax.

Although I appreciate the clever allusions to the original tale and I can see through some of the missing details of the story, the biggest factor that hurt this film was the pacing. For a film in the horror-action genre that is marketed as being similar to the Underworld franchise, there were some incredibly slow moments. The slow pace can be attributed to character development. More often than not, when we were learning about character’s back-stories, it didn’t aid in advancing the story. While each character’s development may have looked great on paper, those character traits were completely unnecessary to carry the film forward. There are about four or five “main characters” that have their stories told, and they all end the same: the back-story given is not supported by the character’s behavior.

Ultimately, if the film stuck to the allusions to Little Red Riding Hood, and thought of stronger ways to weave those allusions into the original concepts of the film, it would have been extremely enjoyable. There are some great bits of humor and some intelligently filmed fight sequences, but the pacing of the story was very detrimental to the film as a whole.