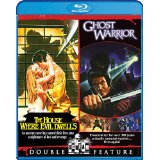 Any time I get a double feature, the first thing that comes to mind is that these two movies don’t know it, but they are now in competition with one another in my eyes. It was that way for Grindhouse as well as originals subsequent sequels. This time was no different in my eyes, and after screening both features there is a clear victor. Which one, you ask? Well, I’m not telling at this moment. (Don’t worry, I will, but I can’t just give it up that easy, because if I do, what assurance do I have that you will watch both films?) However, I’m sure my preference will become quite clear once you start reading.

Those who do not learn from history are doomed to repeat it, seems to be the principal lesson in The House Where Evil Dwells. A century earlier in Japan, a samurai comes home to find his wife in bed with her lover and in a fit of rage kills them both, taking his own life afterwards. Since then, the home remains vacant for decades due to speculation that the ghosts of that massacre remain in the house. The unsuspecting Fletcher family, new to Japan and refusing to let a ghost story keep them from an authentic home, move in.

Before long, each member of the family finds themselves acting out of character and unable to control their actions. The longer they spend in the house the more they realize that they are reliving the events that transpired a century earlier and if they are not careful will suffer the same fate.

Ghost Warrior, despite its scientific impossibilities, had a pretty interesting plot. A 400-year-old samurai warrior entrenched in a block of ice is reanimated through a process of cryosurgery (this would be the scientific impossibilities). Unaware of his surroundings or the time that has passed, he is kept in isolation. The scientist involved in his resurrection see dollar signs at this discovery, all but Chris Welles (Janet Julian) who merely wants to help the warrior, who is very confused and standoffish at first. As time progresses, the samurai now known as Yoshimitsu, or Yoshi, is willing to communicate (in a fashion) with Chris.

The situation takes a turn for the worse when unforeseen circumstances result in Yoshi breaking out of the facility and onto the streets of Los Angeles. Exposed to the changing world, Yoshi quickly finds himself in trouble and implicated in various crimes, which brings police attention so that the scientists are now forced to contain the situation even if it means returning Yoshi to the grave.

As I said, despite the scientific impossibilities, Ghost Warrior is clearly the better of the two features. In my opinion there was simply more to latch onto. You had a clear hero, and you are taken on more of journey with this tale than its former counterpart. I found the circumstances of this story more easy to identify with, and there was a much better arc as far as the story was concerned. Both films possess a certain symmetry in regard to the plot; however, there is no confusion as to which feature resonates better in my opinion.

Despite my preference, there are still good aspects to The House Where Evil Dwells, such as the method by which events unfold. Not to give much too much away, but the plot tends to stay on point without deviating much, making it easier to hold my attention. The curse is also carried out an intriguing way as well, and when it comes to believability, I’m pretty sure I can accept the idea of a curse a lot easier than the idea of thawing out a samurai.

In conclusion, if you enjoy films of an older generation, these are two watchable additions. In my opinion, the target audience for this double feature will be more middle age, as I do not imagine the younger generation taking much of an interest. Again, I may have preference, but I could watch either one on a day that I don’t have much going on. This is more of a late-night, nothing-else-on type situation rather than a preplanned endeavor.

Jeremy Butler is a film school graduate of the International Academy of Design and Technology. He is been writing for Upcomingdiscs since 2012; however, movies have played a big part of his life for much longer. Favorite genres include horror, science fiction/fantasy, and comedy. Favorite movies are V for Vendetta, Boondocks Saints, Kiss Kiss Bang Bang, and The Godfather.
The Giant King Little Dead Rotting Hood