Posted in: Disc Reviews by Brent Lorentson on January 13th, 2016 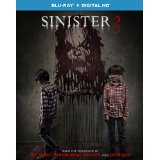 In 2012 Sinister had its release and horror fans seemed to be divided on the film.  For me, I dug the mythology of Bughuul, an evil spirit who appears in 8mm family films that seem to always end in some new gruesome way.  He’s a character the horror genre needs, as I see him as a silent hybrid of Jigsaw (from the Saw franchise) and Freddy Krueger (from the Nightmare on Elm Street franchise), where he’s a killer who gives us unique kills in some unsettling locations.  Now with the release of Sinister 2, do the filmmakers step up their game and deliver us more from the possible new icon of horror?  Sort of; just not how I would have expected it.

Following the events of the 2012 film, we find Deputy So & So (James Ransone) is no longer a deputy, but a private investigator who is obsessed with his pursuit of Bughuul and is doing his best to stop him before anymore families are killed.  So & So has managed to figure out the pattern that Bughuul uses and figures if he can destroy the next location before a family moves in, he may be able to save a family in the process.  Unfortunately, the home he plans on burning to the ground, a location that was previously the site of a horrific murder, is already inhabited.

The Collins family is the new family that Bughuul has in his sights.  Courtney (Shannyn Sossamon) with her twin sons Zach and Dylan (Robert and Dartanian Sloan) are on the run from her abusive husband, and it’s in the home where they seek protection that they are at their most vulnerable to the unseen forces that are around them.

What’s different this time around is that we are given the perspective of how Bughuul uses the children to do his dirty work. Not get into spoiler territory, I have to say I was disappointed by how little Bughuul is utilized.  Yes, he is present throughout, but the film takes things in another direction. If not for the “kill movies” this really could have been just your typical ghost story, and that left me disappointed.  Bughuul is set up to be such an inspired villain from the first film, yet in this film the characters who seem to be influencing the terror are the restless spirits of children under Bughuul’s control.  Basically Bughuul is too lazy to do anything himself, and he uses the spirits of other kids to fill in for him.

Granted, this time around we get to see a little more on how the “kill films” are made, but at the same time it manages to raise many more questions in the process.  We see children using the 8mm camera to document their kills, but what’s frustrating is that in this film the camera seems to just appear, and all the kids seem to know how this equipment works.  The moment you start asking questions with this film, the appeal quickly slips away.

What does work for the film is its running time; clocking in at about 97 minutes, the film does have a nice pace that never drags and doesn’t stretch on longer than it needs to.  Because the film manages to keep the story moving, the viewer doesn’t get the chance to question some of the logic we have on display here.  It doesn’t make it a bad film; it just frustrated me that instead of exploring such a unique character as Bughuul we instead get the generic “ghost kids”, though to their credit they do deliver some solid creepy performances.

Despite my disappointment, I still enjoyed the film. I doubt I’ll rewatch as often as I have the first, but it’s a film that still keeps me excited for what the future of the franchise may hold.

Sinister 2 is presented in a 2.40:1 aspect ratio.  The 1080p image is arrived at with an AVC MPEG-4 codec at an average of 32 MBPS.  It’s not a strange thing for a horror film to be dark, but I found Sinister 2 to be drabber and more stripped of color than most horror films.  Colors don’t pop in this film and instead have a washed out muted look.  The color palette sets the tone, and it’s the black levels that are more front and center. The Bughuul character is one who likes to lurk about in the shadows, and it’s this foreboding shadow play that adds an extra pop with certain jump scares.

The DTS Master Audio 5.1 track is for me the highlight of Sinister 2.  What the audio team, both with FX and the score, has put together is something special that separates the Sinister franchise from the typical horror releases we see these days. How sounds are blended to create some creepy atmospheric tones just elevates the suspense factor so much.  The film may rely a bit heavily on some jump scares with loud music or FX cues (a certain ham radio scene comes to mind), but it’s to be expected with horror films.  This is what an immersive track should be, giving the viewer something different to stand out from the humdrum typical horror film.

Feature Commentary:  Director Ciaran Foy manages to deliver an insightful look into the production on the film.  Considering he’s on his own for the track, he keeps things moving with very few stretches of silence.  Thankfully he gives more insight into the decision to follow the kids and the “ghost kids” more in this film while also delivering some fun technical insights into the production.

Deleted Scenes: We get a collection of deleted scenes that honestly I wouldn’t mind if they were all thrown back into the film for an extended cut.  For those that enjoyed the film, these scenes will only further your enjoyment of the film.

Extended “Kill Films”:  Now you can watch the “kill films” that the ghost children made, uncut and ready for you to devour and to take notes when planning a film of your own when Bughuul comes a calling.

Time to Watch Another: The Making of Sinister 2: (10:11)  A very brief look into the making of the film.  We get some behind-the-scenes footage as well as a look into the audition tapes for many of the children who are in the film.

While the film isn’t great, it still manages to be fun.  For those who have not seen the first film, honestly I think you may like the film more than those of us who have.  It’s one of the rare sequels that doesn’t require you to come into the film with any knowledge of the previous film.  I wouldn’t say this is one to run out and buy for your collection, but it’s worth checking out for a late night fright flick.

Brent Lorentson is a horror writer and film critic based out of Tampa, Florida. With a BA in Digital Film, he co-wrote and co-directed Scavenger Hunt. His short stories have appeared in various horror anthologies. In 2019 his short script Fertile Blood will be a part of the anthology horror film Slumber Party. He is currently working on his first novel A Dark and Secret Place set to be released in late 2019. Favorite Films: Taxi Driver, Fight Club, I Saw the Devil, The Wild Bunch, Dawn of the Dead, A Clockwork Orange, Pulp Fiction, Heathers, The Monster Squad, and High Fidelity.
Little Dead Rotting Hood Alan Rickman (1946-2016)