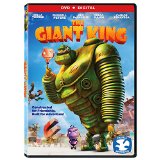 Yak: The Giant King is a 2012 animated offering from Thailand. It is based on Ramakien, the country’s version of a famous Hindu epic poem. Neither of those facts is readily apparent in the packaging and presentation of The Giant King, an American adaptation that was recently released on DVD. On the one hand, it helps explain why the dialogue here hardly ever matches the characters’ lip movements. But knowing that this crude, chintzy offering is actually based on something rather substantial makes it even more of a letdown.

The movie is set in a world populated by robots and overseen by a spacebound/godlike entity called RAM (Remote Automated Motherbot). The imposing-looking Zork (voice of Russell Peters) is meant to be a violent battle bot, but his real dream is…to be a kindergarten teacher. Pinky (Bella Thorne) appears to be Zork’s polar opposite, a hard-charging pipsqueak obsessed with bringing Zork down for not obeying RAM.  An epic clash between Zork and Pinky ends with the odd couple chained to each other and wandering the barren planet.

The pair meets a series of quirky characters on their adventure, including a sickly, sniffly bot named Rusty (Meg DeAngelis) in search of a family. There’s also Krudd (Carlos PenaVega), an egotistical toy salesman who yearns to be a battle bot. To accomplish this, Krudd is intent on battling and destroying Zork to gain favor with RAM. Pinky supposedly has the same mission, but her evolving relationship with Zork makes things a lot more complicated.

As you can see, the story has some promise. There are also worthwhile messages here about sticking with your dreams even if others think they are stupid, and the virtue of not necessarily staying on the path life has laid out for you. I don’t even mind that these themes are clumsily and artlessly incorporated in the most obvious ways possible; after all, the film’s extremely young target audience doesn’t always pick up on nuance. The problem is the movie is ultimately even more aimless than its two main characters, so it fails to capture or hold the audience’s attention.

The easiest way for an animated film to appeal to its target demo is with bright, zippy visuals. The Giant King does have a pair of heroes who could easily be turned into action figures, and the climactic sequence does feature a cool “stairway to heaven.” (If you ignore the fact that it’s not a stairway…and that it’s not actually the film’s climax, even though it should be.) However, even the visual presentation falls a bit flat here. You won’t be surprised to hear the animation isn’t exactly Disney/Pixar-quality, but it also doesn’t achieve the charming simplicity of an Aardman Animations or Studio Ghibli film. Instead, it falls unremarkably in the middle.

The bigger issue is the jumbled storytelling, which largely comes as a result of imposing a new plot on the existing animation. Filmmakers Mychal and Melanie Simka handled the English-language version, and they’ve come up with a meandering narrative — the film halfheartedly becomes a musical a few times — that only occasionally returns to its worthy themes. The rest of The Giant King‘s running time is filled with repetitive gags and toddler-level humor. (Sample lyric from Krudd: “Don’t be such a poop.” Also, boogers end up playing an important part in the plot…I’m not even kidding.)

Peters’ whacked out, absent-minded vocal performance as Zork wrings a few laughs out of the material, but Thorne is miscast and a flat killjoy as Pinky. The best vocal work comes a bit late in the game, and it’s from scene-stealer Gregg Sulkin as quirky robotic bird Flapper. I fully realize that I’m not exactly the target audience for this film, but I doubt even kids will find this film captivating. And in the meantime, parents will have to suffer through it too. The Giant King might’ve been a hit in its original form back in Thailand, but something definitely got lost in translation.

Tuesday Round Up: January 12, 2016 The House Where Evil Dwells / Ghost Warrior