Posted in: Tuesday Round Up by Gino Sassani on January 19th, 2016 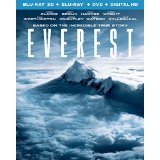 Howdy partners. Gino here again. Johnny’s out on the high seas running from the likes of Captain Jack Sparrow and Flint. If he makes it back, I’m sure he’ll be filling you in on titles again real soon. If not, we’ll be sure to send out a search party real soon.

This week Shout Factory keeps it in the family with Sisters: Season 3. Timeless Media canonizes The Saint Seasons 3 & 4. Indiepix has faith in I Believe In Unicorns. Universal climbs Everest in 3D and menaces us with Sinister 2. Warner Brothers gives us Robert De Niro in The Intern. A&E grabs the gator by the tail with Swamp People Season 6. Sony logs in with The Diary Of A Teenage Girl. Lionsgate passes judgment on The Condemned 2 and raises our awareness with Stonewall.

We’d love to hear you tell us what you plan to add to your own video collection this week. Once a month we’re going to give away a free DVD title from among the comments in our weekly Round-Up posts. You tell us what you’re interested in, and you might just get something free for sharing. The winners and their prizes will be announced the first week of every month right here in our Tuesday Round-Up post. Remember that you’re not telling us what you hope to win. Prizes are taken from our collection of extra and unclaimed titles here on the ranch.

Gino Sassani is a member of the Southeastern Film Critic's Association (SEFCA). He is a film and television critic based in Tampa, Florida. He's also the Senior Editor here at Upcomingdiscs. Gino started reviewing films in the early 1990's as a segment of his local television show Focus. He's an award-winning recording artist for Omega Records. Gino is currently working on his 8th album Merchants & Mercenaries. Gino took over Upcomingdiscs Dec 1, 2008. He works out of a home theater he calls The Reel World. Favorite films: The Godfather, The Godfather Part II, The Body Snatcher (Val Lewton film with Karloff and Lugosi, not the pod people film), Unforgiven, Gladiator, The Lion King, Jaws, Son Of Frankenstein, The Good, The Bad And The Ugly, and Monsters, Inc.
The Intern (Blu-ray) The Saint: Seasons 3 & 4