Posted in: Disc Reviews by Archive Authors on January 19th, 2016 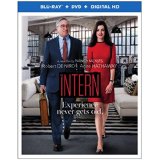 The Intern tackles a pretty important issue. Age gaps are the elephant in the room that no one wants to acknowledge. The issue is confusing to address, because a lot of people don’t even know what age group they belong to or don’t care. But the differences are very real, and they cause enormous alienation and division. Baby Boomers and Millennials are two examples which are represented here by Robert De Niro and Anne Hathaway, who has a daughter starting the first grade, so another age group is represented. To be clearer, Baby Boomers are born between 1946 to 1964, Generation X 1965 to 1980, Generation Y/Millennial 1981 to 2000 and Generation Z/Boomlets after 2001.They are all categorized as having their own issues and identifying traits. You noticed I didn’t mention anyone over 70, and that’s because they don’t matter. In fact, Baby Boomers don’t matter. I don’t agree with that at all, but that is the tendency and thrust of modern culture. This is a complicated matter, so I’ll have to leave it there and move on to discussing this movie. The movie addresses this issue.

Jules (Hathaway) started an internet company that markets clothes, and after 18 months, it has become fantastically successful. Ben (De Niro) is a 70-year-old retired widower who wants to keep busy. He gets a job as an intern for Jules. His work ethic, competence, and experience become indispensable.

Nancy Meyers is a veteran writer/director with a hefty string of hits going all the way back to Private Benjamin and including What Women Want, Something’s Got to Give and It’s Complicated. I need to mention that she was born in 1946, making her 66. She is a Baby Boomer. The goal of this movie is to say we are more alike than we are different. De Niro is like a good dad (and not the Dirty Grandpa he plays in his next movie). Myers usually bases her movies on characters with complicated romantic relationships, but the main focus here is not romance, but friendship. There are many complications to deal with in the movie, and maturity comes to the rescue every time. Meyers obviously is of an age to identify with De Niro’s character, but she really wants to show that we all need to grow up and be more mature. That is a fantasy, because most people don’t want to be mature. They don’t want a life that is normal, mature, and intelligent. They want to have crazy and exciting lives. This movie may be a little boring, but it is full of positive messages. Being responsible and full of good intentions is boring. Boring can be a good thing.

Linda Lavin (Alice) and a gorgeous-looking Rene Russo (Thor, Lethal Weapon 3 and 4) provide some romance for De Niro. His life is balanced, dependable, and boring, and work is the main focus of his life. His romantic life is secondary, and he seems happy.

The Intern is presented in its original aspect ratio of 1.85:1. The 1080p image is arrived at with an AVC MPEG-4 codec at an average 25 mbps. Contrast is pretty important in this high-definition image presentation. The offices of About The Fit are very much done almost completely in stark black and white colors. The image is consistently sharp and a bit glossy. Not much in texture, but black levels are pretty solid. Colors are natural with pretty much reference flesh tones, particularly in close-ups.

The DTS-HD Master Audio 5.1 is mostly there to serve the dialog. Surrounds deal mostly in city sounds and a little office environmental stuff. The score is whimsical and subtle, never really getting in the way. Sub levels are pretty tame, adding a little depth at times.

Learning From Experience: (4:46)  Cast and crew talk mostly about the writing and their characters.

Designs Of Life: (6:07) This is pretty much a Nancy Meyers love-fest. Cast and crew sing her praises on everything from production design to her work as director. There’s a piece on the differences in design between Jules and Ben’s brownstones. There’s also some material on the costumes.

The Three Interns: (5:45) Actors Zack Pearlman, Jason Orley and Adam De Vine answer questions about their work on the film and their experiences with De Niro.