Posted in: The Reel World by Gino Sassani on February 1st, 2016 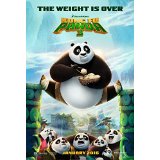 It’s hard to maintain the attention of the 21st-century child. Animated movies have to combine enough elements of charm and action to keep their attention for a little under two hours. If you want to keep a franchise going, you have to rip out your sequels in reasonably tight schedules. It’s been over four years since Kung Fu Panda 2, and we waited nearly that long between the first and second entry. That’s a long time in a culture where we move from fad to fad almost by the hour. But if the films are good enough and leave enough of an impact, you might be able to bridge those years successfully. In 3-4 years you’re almost targeting a new generation of your target audience. Kung Fu Panda 3 appears to have found the secret of that kind of franchise longevity.

It all starts with coming out with a compelling enough story that retains the things people loved without the feeling that we’ve been there before. You have to keep up the star cast, which isn’t always easy at all. Too many franchise animated projects lose important voice talent, and the disappointment is undeniable. At the same time you must provide new characters and voices and hope the audience falls in love with them as well. Lastly, you have to take advantage of technology improvements while still keeping the general atmosphere consistent. And while Kung Fu Panda 3 does indeed have a lot of the been there/ done that feeling, it’s not so overwhelming that you feel like you’re watching the same film over and over again.

The story’s a pretty good evolution of the Po (Black) character and his relationship with the others. I rather thought it was clever, which kept it a little fresher than I honestly expected. Shifu (Hoffman) informs Po that he has reached a milestone in his training. It is now time for him to become the teacher and take over the training of The Five. Of course, it doesn’t go very smoothly, and Po finds his teaching to be somewhat wanting. Meanwhile an old villain Kai (Simmons) has been trying to leave the spiritual plane by collecting the chi from Kung Fu masters who have died. He finally defeats Master Oogway (Kim) and now has the power to return to the material world, where he intends to steal all of the chi from the Kung Fu masters… including that of the Dragon Warrior, Po. With the help of his jade army of captured masters, he’s a formidable force just as Po is questioning who he is and if he’s worthy to be the Dragon Warrior.

Plans get more complicated when a new Panda enters the area. Li (Cranston) has been searching for his son, who disappeared many years ago. After some obtuse dialog that has the audience wanting to scream at the screen, Li and Po finally get the obvious connection and discover each other, much to the annoyance of Po’s adopted father, Mr. Ping (Hong). When Po is warned of the impending danger, his confidence needs the kind of boost that returning home just might provide. Li promises to teach him how to use the magical powers they once used to heal Oogway, and Po needs to learn what it means to be a panda. Unfortunately, he only brings danger to his childhood home and must become a teacher after all. He learns that each person has a strength that can be guided for training. So now he must prepare the panda village for the attack by Kai. The results, though predictable, play out in a nice mixture of a “be yourself” moral and the expected action sequences.

By now Jack Black has grown quite snugly into his Po character. I can’t imagine anyone else voicing the panda. It’s really one of those extremely natural fits that bring an unusual level of life and spirit to the animation. To a certain extent, the same can be said for the familiar franchise cast. Dustin Hoffman has a particularly wonderful relationship with Shifu that adds wonderful dimension to the character. Of course, the voices of Angelina Jolie, Jackie Chan, Seth Rogan, Lucy Liu, and David Cross fall in smoothly as Po’s friends and comrades The Furious Five. Randall Duk Kim is a very welcomed return character from the first film as the wise and often frustrated tortoise Oogway. His character is somewhat of a solid anchor here, and you can hear the emotion in Black’s voice as he’s able to interact with his old friend and mentor. When you consider that voice acting leaves little chance to actually interact with the others, there’s a lot of that kind of chemistry in the relationships thanks to such emotional voice work. It’s clear these folks really love these characters, and that kind of thing can make a huge difference, to be sure.

The film also does a pretty incredible job of integrating some new characters and their voice actors. At the top of the list as to be J.K. Simmons as the film’s big bad, Kai. Simmons has been on fire in recent years, and this film only further demonstrates his range. Bryan Cranston adds the huge new milestone in Po’s story with the voice of Li. This is the kind of character with a lot of room to grow comfortably in the mix should the story continue. He has an almost John Goodman heft of heart and soul, if not brains, that make him instantly a sympathetic character and one you want to see more of in Po’s life. Of course, there’s the added bit of rivalry with Mr. Ping that brings out that character more than in any of the first two films. Kate Hudson’s Mei Mei might be the more disappointing of the new characters through no fault of the voice work. She’s a panda who flirts quite a bit and never truly develops beyond that element for the movie. It never really fits, and Hudson has absolutely no chemistry with Jack Black. I get the impression there were plans for more here, but the lack of a bond might have led to her part and their relationship being cut a bit.

The film maintains the charming blend of character with the Kung Fu culture that seems to hit the audiences just right. The animation is another step in technology rivaled perhaps only by the magicians at Pixar. There is a wonderful and distinctive style to this franchise that works to create a real atmosphere for these characters and this story to unwind for us. There’s the expected use of the 3D and the standard and very simple animation aspects that continue since the first film. The animation of the spiritual world is where you get to see some of the new advances in the franchise’s animation technology. There’s some wondrous work here, for sure.

Of course the advantage of waiting that long is getting the opportunity to do it right instead of rush another lesser project out the door to cash in. The numbers certainly dropped between the first two even though many consider the second a better film. Going by opening, this one will likely drop a little more. It’s a very solid third film in any franchise, and I believe there are still legs. But the time it takes to get it right also means that generational turnover and distractions away from these characters. The story here also kind of works as an end to Po’s journey. Certainly, there is more to explore for both Po and this world, but there’s a comfortable and satisfying landing here that works. “Never underestimate the impact of dramatic exit.”

Gino Sassani is a member of the Southeastern Film Critic's Association (SEFCA). He is a film and television critic based in Tampa, Florida. He's also the Senior Editor here at Upcomingdiscs. Gino started reviewing films in the early 1990's as a segment of his local television show Focus. He's an award-winning recording artist for Omega Records. Gino is currently working on his 8th album Merchants & Mercenaries. Gino took over Upcomingdiscs Dec 1, 2008. He works out of a home theater he calls The Reel World. Favorite films: The Godfather, The Godfather Part II, The Body Snatcher (Val Lewton film with Karloff and Lugosi, not the pod people film), Unforgiven, Gladiator, The Lion King, Jaws, Son Of Frankenstein, The Good, The Bad And The Ugly, and Monsters, Inc.
The Sin Seer Bridge of Spies (Blu-ray)