Posted in: No Huddle by Jeremy Butler on February 1st, 2016 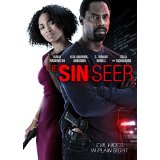 With a few slight changes and additions, Sin Seer could have been quite something. As is, it is far from the worst film that I have ever seen, but there were a few areas that upon examination did not make much sense, such as in what world would we ever allow a convicted felon to carry a weapon? There are a few other things; however, I will let you marinate on that question, as it is one that plagued me for much of the movie’s duration. Our story opens up at a prison; convicted felon Grant Summit (Isaiah Washington) is released after serving an undetermined amount of time for the death of at least three people. OK, let’s just pause there. Let that sink in, he killed at least three people, and he is being released while he is still young enough not to require a breathing apparatus to survive. In the film’s defense, the circumstances of the crime are bit muddled, and he was outnumbered. Unpause; after his release he finds work with Rose Ricard (Lisa Arrindell Anderson), a part-time consultant of the police department. Rose is gifted; however, the nature of her gift is not very clear in the beginning. Based on my assessment, Rose is uniquely attuned to the sins of other people. She uses this ability to assist the police as well as earn a living for herself. As you can imagine, her probing into the private matters of others has the capacity to put her in danger; enter Grant. He serves as her protector from those who would do her harm. However, he may not be enough given her new case.

Rose is hired by the wife of a boxer who has been missing for six months. As the two dig deeper into the case, it becomes evident that the once-believed-wholesome boxer had a darker side and was caught up in a conspiracy that will have the pair unsure who they trust, or if they can even trust each other.

Now, as I mentioned earlier, on the surface Sin Seer had an interesting premise, and there was definite potential to be a compelling movie. Unfortunately the story was mishandled and resulted in leaving me with more questions than answers. My first and most damning question is posted in the first paragraph. That was a continuity error that was I unable to look past. Granted there are not specifics in regards to what crime Grant was officially charged with; however, given the violent nature of it, the idea that he can be carrying a firearm was a hard pill to swallow. For the sake of the rest of this review, we will power through.

The film also features a couple twists geared towards ramping up the drama. In the case of the first twist, it was a success at bringing a moderate level surprise as well as causing a rift between the lead characters. The second one, on the other hand, I must admit that I was kind of expecting it. It wasn’t anything that the story did that put me on the right track; however, typecasting is what really made me aware. When you see it, you will most likely understand.

Also, there is not an abundance of backstory to bring the audience up to speed. The sink-or-swim approach of dropping the viewers right into the story is likely to ensure that most will sink rather than swim. I’m a veteran reviewer, and I had trouble keeping my head above water. A five-minute backstory introduction could have cleared up a lot of questions such as the confusing nature of Rose’s abilities; it took me half the film’s duration to gain a vague understanding of how her powers worked, and I’m still unsure if my assessment is correct. There were also a few characters that were ultimately unnecessary.

In conclusion, I’m not going to say that Sin Seer is not worth watching; however, I will say that it is not worth ticket admission especially at today’s movie prices, because you may leave disappointed. Not because it was not worth your time, but becomes you can see the potential it had to be a compelling story. Fortunately this is a direct-to-DVD release, so no ticket admission required; however, this is more of a film you watch when it comes on TV and your favorite shows are showing reruns.

Jeremy Butler is a film school graduate of the International Academy of Design and Technology. He is been writing for Upcomingdiscs since 2012; however, movies have played a big part of his life for much longer. Favorite genres include horror, science fiction/fantasy, and comedy. Favorite movies are V for Vendetta, Boondocks Saints, Kiss Kiss Bang Bang, and The Godfather.
Jack’s Back (Blu-ray) Kung Fu Panda 3