Posted in: Disc Reviews by Archive Authors on February 1st, 2016 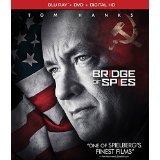 Steven Spielberg. Tom Hanks. The Coen Brothers. 1957. The Cold War. Mark Rylance. There are a lot of elements to the stew that is Bridge of Spies. Let’s start with the most important ingredient. Steven Spielberg has been a household name for decades now as the most reliable producer/director of movie entertainment we may have ever seen. His name is so synonymous with big-screen entertainment that he needs no introduction from me. But he has been trying to get away from pure entertainment for a long while now, often with great success. In more than one interview, Spielberg has said he wants to get away from the really big movies he’s famous for and do mostly historical dramas. Not that many of them haven’t been really successful, but the two big ones are Schindler’s List and Saving Private Ryan. Both those had undeniable impact, enormous emotional heft, and were hugely successful. Lincoln from 2012 was maybe Spielberg’s most satisfying attempt at recreating history. Now we have Bridge Of Spies.

The Cold War drama has a different feel. It is full of details of the time period and subtle shadings of emotions with an overriding sense of lightness to what could have been a heavy-handed look at a very black-and-white era.

Tom Hanks as James Donavan is the center of the film, of course. He is our most beloved actor who seems to effortlessly embody the good-natured but tough American that most Americans would like to be. Here he is an insurance lawyer and former Nuremberg prosecutor who has been nominated to the thankless job of defending a Russian spy. Except nobody wants him to do much. It’s all just for show, so the world will think we actually care about justice. Donavan takes the job seriously and butts heads as he tries to actually do his job. He is blocked at every turn but makes a prediction in an attempt to avoid the death penalty. Donavan thinks the Russian might be more valuable as an item to trade in the future. As if on cue, the famous Gary Powers spy plane incident occurs. In 1957, this hostage crisis dominated the headlines. Donavan is tapped again to negotiate a trade. Things get complicated when an unimportant college student gets caught on the wrong side of the newly-erected Berlin Wall. Donavan thinks everyone is important and starts to act like Schindler (which in a postscript he did even more effectively in Cuba a few years later).

Joel and Ethan Coen, who are among the most respected and adventurous writer/directors of the last 20 years, came in to reshape a script by Matt Charman. The tone of the movie and the script is between tension, conflict, and gentle dollops of absurdist humor. The stakes are high, but there is an overlay of Frank Capra and Norman Rockwell which conveys the nostalgic image of an America long gone. But I wouldn’t compare Bridge of Spies to Schindler’s List, Saving Private Ryan, or Lincoln, because the emotional intensity and focus are muted. Bridge of Spies is not a comedy but acts like one sometimes. As a result, it loses a degree of gravitas. It is a good film and a crowd pleaser, but seems to stop just short of greatness.

Bridge Of Spies is presented in its original aspect ratio of 2.40:1. The 1080p image is arrived at with an AVC MPEG-4 codec at an average 35 mbps that at times reaches over 40mbps. The high-definition image presentation does a wonderful job of building atmosphere. It all puts us right in that place and time. The contrast from the warm, earthy hues of the American scenes to the cold blue tints of the frigid and bleak East Berlin is all very striking. Spielberg knows how to use lighting and texture to deliver a time period or a specific environment. You won’t be disappointed here. Black levels are such that you get the intimate details even in the shadows. A touch of color, particularly red, is allowed to escape from the almost monochromatic world in East Berlin. Textures add the reality, and sharpness allows those textures and details to truly shine. Close-ups deliver ultra-sharp images. You don’t see films shot like this so much anymore. There’s a decidedly film-like nature to the material that has a life of its very own.

The DTS-HD Master Audio 7.1 isn’t quite so stunning or visceral. The extra surrounds only deliver a small amount of ambients that work best in the bleak snow storm of East Berlin. Dialog is really what is important here, and that’s where the focus almost always remains. The most aggressive surrounds and subs come obviously from the downing of the U2 plane. This is where things jump to dynamic and energetic. The score is subtle and appropriately out of the way.

A Case Of The Cold War – Bridge Of Spies: (17:45) There’s a lot covered here from Cold War era footage and plenty of historical perspective to the behind-the-scenes footage that pretty much spotlights Spielberg in action. Cast and crew talk about the film but also about the era being depicted here. Spielberg recounts a story his father told him about seeing the actual U2 wreckage as an exchange program engineer in the Soviet Union in 1960. Apparently it’s a story Spielberg has always wanted to film. Powers, Jr. now runs a Cold War museum and offers his own thoughts on his father and the film. We also see and hear from the real Frederic Pryor. Screenwriter Matt Charman recounts that he originally intended to write about Donovan’s negotiations with Castro for nearly 2000 prisoners but became more fascinated with this story which he originally researched merely as background.

Berlin 1961 – Recreating The Divide: (11:35) Spielberg took the production to Berlin where many of the film’s pivotal locations actually happened. Where he could, he filmed on the exact spot. Others are in Poland where they reconstructed 300 yards of the wall itself. This is a wonderful look at the exacting detail work and how it gave the actors inspiration for their parts. It ends up at costume design.

U2 Spy Plane: (8:25) Once again they went to where things really happened. For the U2 footage they went to Beale Air Force Base where the U2 did and still operates from. The U2 in the film is a real one that still flies missions. Powers Jr. joins again where he acted as a consultant and played one of the CIA operatives in the training scenes for the U2 pilots. We also get a look at the behind the scenes footage of the crash scene.

Spy Swap – Looking Back On The Final Act: (5:42) What did you expect but that they filmed the climax on the actual bridge where the exchange took place? There’s some Gary Powers interview audio here that helps to put it all in perspective. This was Tom Hanks’ last night on the film and obviously an emotional shoot. It’s covered here.

Mark Rylance may be the greatest living actor that few people know, and that’s because he has done most of his best work on the stage in New York and London, winning the top acting awards (Tony and Olivier) multiple times on both sides of the pond. Rylance has become too acclaimed to languish on a mere stage and has been persuaded to have his image digitally preserved for the big screen. He may be a brilliant stage actor, but he may be a better film actor. His Russian spy, Rudolf Abel, is a masterful display of understatement and charisma. Mark Rylance may soon be the greatest living actor that everyone knows. Bridge of Spies has many pleasures, but I was hoping for more.