Posted in: The Reel World by Archive Authors on February 1st, 2016 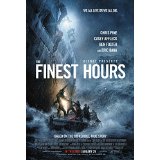 There are many films that depict the ferocity and cataclysmic power of the vast ocean. It is a fearsome display that cannot be imagined in any way that compares to the reality of the experience. The Perfect Storm, Life of Pi, The Guardian, and Titanic are just a few examples of disasters at sea. It is the United States Coast Guard’s job to rescue distressed people under severe emergencies at sea. The Finest Hours is a depiction of a true-life sea rescue under the most challenging and horrifying conditions. It is known as the most successful small boat rescue ever recorded. When I say small boat, it is the rescue boat I’m talking about, but the ship they were singlehandedly sent to rescue was a gigantic T2 tanker Pendleton, which had split in half on open seas. Part of the problem was that another tanker had already split in half a few hundred miles away, and all resources had already been diverted in that direction. The second tanker was an afterthought that was tackled by a relatively inexperienced crew. To repeat the true-life situation, T2 tankers SS Mercer and SS Pendleton were split in half off the New England coast. The Pendleton had lost radio communication was only identified by an alert citizen from the shore.

The Finest Hours is a Walt Disney film, and I think Walt would be proud. The film takes place on February 18th, 1952, and all of the American values that were part of this country at the time are on display. It is a very old-fashioned film in both look and approach. The only difference is that modern-day technologies are fully utilized to show an amazing true-life display of courage that would have been impossible to do in 1952.

Boatswains Mate First Class Bernie Webber (Chris Pine) is the central focus of the movie. Pine gives maybe his best performance as a somewhat shy and wishy-washy Coast Guard officer ultimately rock-solid in courage, determination, and core values. He has been shadowed by somewhat unsuccessful attempts previously and so was not in the vanguard rescue attempts. A big part of the story is devoted to his rather charming and hesitant romance with Miriam (Holliday Grainger), who then becomes a dynamo in supporting Bernie when he is out at sea during the storm.

The cast is full of terrific actors, all doing a fantastic job of bringing this somewhat forgotten event to life. Eric Bana, Casey Affleck, Ben Foster, and many others are uniformly excellent. It is a movie on a grand scale that is simply about the saving of lives. It is about average people banding together selflessly and heroically, because it is very simply the only thing to do.

As I said, it is an old-fashioned film, and I mean that in the best possible way. It is about a time when we weren’t ruled by endless distractions. Life was simple. People did their jobs, and, for many, their jobs were their life. It has produced a very pure and beautiful movie experience that I thought we had all forgotten.