Posted in: Disc Reviews by Gino Sassani on January 31st, 2016 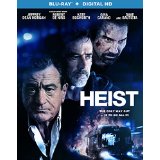 “Stealing from the Pope is suicide.”

We’re not talking about that pope. We’re talking about Robert DeNiro in his latest direct-to-video feature film Heist. It’s true that DeNiro hasn’t exactly been picky lately with his parts. He commands a big paycheck, often for just showing up on the credits. It’s common among actors particularly those like DeNiro who have made quite a name for themselves and find themselves in the back nine of their career. You have to at least give him a little more credit than most. He’s the kind of actor who always puts in the effort for a project no matter how big or small the film or part happens to be. You could say that gangster parts like Pope come naturally, and he doesn’t really have to act. If you believe that, you’ve just glossed over the actor’s best talent. He always makes it look easy. More than giving his best, DeNiro is an actor that appears to bring the best out of everyone else, as well. Most of the cast and crew refer to him as Mr. DeNiro in the bonus material here. That’s the kind of respect he’s earned from his peers. If he wants to have a little fun on a direct-to-video film from time to time while padding the bank account, I say what’s the harm. Keep doing them and I’ll keep assigning Robert DeNiro movies to myself every time.

It’s almost not completely fair to call Heist a direct-to-video film. There was a limited theatrical release, and it’s obvious that the movie was filmed with the intent to make the box office. Unfortunately, it never made more than 24 screens and pulled in an insignificant $50,000 on a $22 million budget. That’s a steep budget for something intended only for home video screens.

Vaughn is played by Jeffrey Dean Morgan. He works as a dealer on a riverboat casino owned by Pope. He was once a part of the inner circle and was making good money, but he gave it up to spend more time with his daughter. Now she’s very sick and requires expensive treatments to stay alive. The money is running out and Vaughn is desperate enough to come to Pope to ask for a favor… a $300,000 favor to save his daughter. Of course, Pope turns him down. He governs his life by a strict code of rules, the first being that a business is not a charity.

Pope is about to retire after 30 years running the casino. He’s sick himself and has mentored a thug named Dog (Chestnut) to take his place. He has to impress upon the young man to be cold-blooded. It’s unnecessary, because Dog is a stone-cold killer that makes Pope look civilized. If you don’t already know where this is all going, you aren’t watching enough movies. Me, I watch too many movies, so I could see where this was going much of the way.

Vaughn joins with crook Cox, played by WWE star Dave Bautista. They decide to rob the casino just as a big laundry operation is going down. They get away with $3 million, but things quickly break down after that. Their driver scrams and leaves them to hijacking a bus to make their getaway. Basically Reindeer Games which jumped to John Q just became Speed. There are soon a lot of folks interested in stopping this bus. Dog needs to beat the cops to the gang, because finding the money exposes the money-laundering business. Vaughn needs to get the money to the hospital by 7:00, or his daughter drops off the treatment list. Then there’s the busload of hostages that brings a lot of police attention.

The plot borrows from a ton of other action films and doesn’t really have anything original to stand on. That means the film works best when the wheels of that bus keep going ’round and ’round. When the action stops long enough for you to catch your breath, you start to see how improbable it all is. Characters have sudden changes in their own behavior that make sense only with some hastily added detours that slow the action down more, allowing you to see more and more holes. When things are moving this film delivers, but every time things slow down, you’ll be disappointed.

The only way to carry these slow spots with large enough holes to drive a starship comfortably through? It has to be the acting. Fortunately, we do have a pretty talented cast. DeNiro does what he does best. It’s Jeffrey Dean Morgan who really picks up the slack. He has a commanding presence even when he’s playing opposite DeNiro. He doesn’t want to see anyone get hurt, but his actions become a bit convoluted once we learn of a few twists later in the film. Not everything is as accidental as it seems, and suddenly Vaughn is a bit more naive than he should be when it comes to potential harm here.

Underused here are both of the WWE stars. Dave Bautista gets to act tough but never gets to use that commanding physicality in ways he’s best at. Gina Carano plays a patrol officer who becomes involved trying to help Vaughn keep this from getting out of control. Her talents never get put to use, and she ends up a cardboard character whose actions never make any sense at all. This is where some of the action could have paid off, but it never happens.

And that’s the real difference between a solid box office performer and a direct-to-video release. It’s the near-miss quality of it all that changes the entire landscape. All of the pieces are here. The production values and cast are all where they need to be. It all falls apart on a scanty script and in the hands of director Scott Mann who squanders an embarrassment of riches. One of those riches is the inclusion of Kate Bosworth as DeNiro’s daughter. There’s one short scene that attempts to give his character’s final acts a motivation. It’s important information, but it appears tacked on and out of place. I suspect it was an afterthought inserted to provide motivation, and it feels forced.

The film was originally called Bus 657, which is where most of the film takes place. I’m sure it was changed by a studio that wanted to make it sound more like an actual heist film. It’s not. The heist itself takes up very little of the film itself. This isn’t one of those Ocean’s 11 kind of plots where it’s all about the details of the job. This is about the aftermath, and Bus 657 was a more descriptive title, to be sure.

Heist is presented in its original aspect ratio of 2.40:1. The 1080p image is arrived at with an AVC MPEG-4 codec at an average 35-40 mbps. Most of the time this high-definition image presentation delivers a solid punch. The high production values make the sharpness and detail a huge asset. There are some odd moments, however, when the film loses focus. It only happens for a nanosecond at a time, but it happens badly enough to be quite distracting. Can’t say if it’s a flaw in the transfer or the source material. I don’t believe it was at all intentional. Someone dropped the ball a few times, and the entire presentation suffers because of it. In every other respect the image contains some odd choices in color correction, particularly during the actual heist itself. Black levels are a bit crushed, appearing to hide too much detail.

The DTS-HD Master Audio 5.1 is more immersive than the image. There’s a good job of blending action elements with score without walking over the dialog. Sub response is pretty impressive, and it adds a nice dynamic depth to it all. There are a few moments where there’s wonderful use of near-silence. Surrounds work to place you right into the action.

There’s an Audio Commentary with director Scott Mann, writer Max Adams, and Jeffrey Dean Morgan. It’s a light chat that suggests that the film was rewritten too many times.

Deleted/Extended Scenes: (4:08) There are five with no individual selection.

The Making Of Heist: (15:11) This is a clip-heavy behind-the-scenes feature with little production footage. All of the cast and crew interview selections are included in the separate interview pieces provided. Watch them instead.

There are so many elements that you’ll recognize from other films that you’ll leave wondering just what this movie was actually about. It does a great job of not playing the characters as good or bad, and we can all sympathize with Vaughn’s motivations. But it’s been done. There are gems to be found here, but you have to dig hard to enjoy them. The trailer makes it look like it’s all about pulling off the heist. It’s not. That’s the kind of audience who will be shouting, “get me my money back”.

Gino Sassani is a member of the Southeastern Film Critic's Association (SEFCA). He is a film and television critic based in Tampa, Florida. He's also the Senior Editor here at Upcomingdiscs. Gino started reviewing films in the early 1990's as a segment of his local television show Focus. He's an award-winning recording artist for Omega Records. Gino is currently working on his 8th album Merchants & Mercenaries. Gino took over Upcomingdiscs Dec 1, 2008. He works out of a home theater he calls The Reel World. Favorite films: The Godfather, The Godfather Part II, The Body Snatcher (Val Lewton film with Karloff and Lugosi, not the pod people film), Unforgiven, Gladiator, The Lion King, Jaws, Son Of Frankenstein, The Good, The Bad And The Ugly, and Monsters, Inc.
Zombie High (Bluray) The Finest Hours