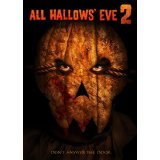 My first All Hallows’ Eve experience was an unexpected fright delight. The 2013 horror film featured a trio of stories tied together by a creepy clown and a familiar “babysitter-in-peril” plot line; it was a fun, unsettling, and grungy throwback to low-budget scares. So you can’t blame me for actually being pretty excited when I found out they’d made another one. Unfortunately, this sequel is a disappointing, thoroughly unsatisfying mish-mash that undoes practically everything that was good about its predecessor.

Things start out familiarly enough: a lonely woman (Andrea Monier) who conveniently owns a VCR find herself in possession of a ratty-looking videotape. The first film had a babysitter find the tape among her two young charges’ trick or treat haul, and the action was tied together by Art the Clown, who brought back unpleasant memories of the first time I can remember being terrified. This time around, the woman is stalked by a pumpkin-masked, knife-wielding Trickster (Damien Monier) who deposits the tape at the woman’s doorstep. Naturally, she pops it into her VCR and away we go.

“Jack Attack” features a babysitter, a young boy, and a grisly twist on the tradition of pumpkin carving. “The Last Halloween” is a post-apocalyptic tale that might make you think twice about answering the door for trick-or-treaters. “The Offering” includes a father, a son, and an unseen menace. “Descent” features a traumatized woman and the elevator ride from hell. “M is for Masochist” offers a twisted carnival that turns the tables on abusers. “A Boy’s Life” explores the classic “monster under the bed” fear. “Mr. Tricker’s Treat” is the portrait of a man who’s a little too dedicated to realistic Halloween decorations. And “Alexia” is a Spanish-language chiller designed to make you log off and run away from your computer immediately.

As you can see, there are *a lot* more stories here than in the first All Hallows’ Eve. (There are 8 in the sequel compared to just 3 in the original, in case you didn’t feel like going up a paragraph and counting.) The problem is this is a classic case of quantity over quality, and it’s not very difficult to see why.

The previous film was written, directed, and edited by the same person (Damien Leone), who had created Art the Clown five years earlier and produced original content for All Hallows’ Eve that seamlessly incorporated the character. (Only one segment, Terrifier, was a rehash of a preexisting short.) In complete contrast, All Hallows’ Eve 2 is entirely comprised of previously-made shorts by eight totally different filmmaking teams; only the wraparound segment with the Trickster features original content. But between the inane prologue and the rushed conclusion, those wraparound segments do a very poor job of tying the entire movie together. (This sequel’s idea of cohesion is having the Trickster subliminally pop up for a second on the TV screen between segments.)

Most of the films (especially “Jack Attack”, “The Offering”, and “M is for Masochist”, “Mr. Tricker’s Treat”) are way too short to be truly effective, while the one story that gets time to breathe (“A Boy’s Life”) is probably the least scary. Most bafflingly, “Alexia” doesn’t feature any English language subtitles; I was fine because I happen to speak Spanish fluently, but ending your anthology with a story that a lot of people literally can’t understand is an odd, potentially disastrous decision.

“The Last Halloween” and “Descent” were the best of the bunch, but even those two standouts left me wanting more. I wanted to know more about the apocalyptic world of “The Last Halloween”, where the holiday’s spooky spirit lives on. And “Descent” doesn’t quite live up to its chilling opening act. (A woman visits a friend and finds her murdered…and the killer is still in the house!)

In the end, All Hallows’ Eve 2 is basically an octet of horror stories that have almost nothing to do with each other (three of them feature a Halloween theme) and are much too rushed to deliver any truly lasting frights.

The Finest Hours Jack’s Back (Blu-ray)