Posted in: Disc Reviews by Brent Lorentson on February 1st, 2016 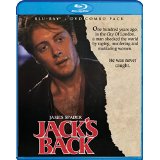 The 100-year anniversary of the Jack the Ripper murders is quickly approaching, and a copycat serial killer is looking to make his mark in Los Angeles.  With only one murder left, the LAPD is in a rush to prevent this madman from completing his across-the-pond murder masterpiece, and the prostitutes of LA are shaking in their heels and miniskirts.  It’s a great way to start off a film, and I’ll admit I was hooked early on with this film, but if you were hoping for a true modern tale of Jack the Ripper, I’m sorry to say you’ll feel more than a little hoodwinked by this film.

John Wesford (James Spader) is a young doctor who is struggling to make a difference with his patients while working in a low income area.  He’s the humanitarian type, seeing all his patients as equals as he deals with the homeless, the elderly, and prostitutes.  It’s the type of hospital where he can cut his teeth while honing his skills and make a name for himself.  Everything is looking up for him until he manages to get himself killed by a man who may or may not be the modern Jack the Ripper.

Does the killer get to get away with murder, and is John’s murderer really the new Ripper?  These are questions that seem to get in the way of the LAPDs case; after all, they want to pin the murders on John.  Thankfully for John’s namesake he has a twin brother, Rick Wesford, who claims to have seen John’s killer in his dreams. Unfortunately for Rick, he doesn’t have the clean-cut look of his brother, and the LAPD has shifted their investigation onto Rick.  To make matters worse, the killer knows Rick is hot on his trail, and they have plans to make sure Rick never gets to find out the truth behind his brother’s murder.

It’s a fun story, but it is sillier than anything.  Where we get teased with the investigation of the Ripper, the story quickly devolves into a completely different story.  I have no problem with the film going a different direction, but it could at least give us some suspense, since we get to see who kills John (and there is no mystery to it).  The lack of suspense simply kills this film, because we know from the start who the killer is.

Spader does a good job delivering two performances here, and we get a glimpse of his emerging talent.  Spader takes the role he is given and runs with it and manages to take a silly premise and makes it work.  The cinematography is another key component to what works here.  The manipulation of shadow and light does a great job at helping developing suspense and helps deliver a great kill sequence involving a hanging.

While the film is not perfect and has its flaws, it does have its 80’s charm that kept me watching.  It’s a fun little film that with lowered expectations can keep an audience entertained for its 90-minute-plus running time.  Here we get a glimpse into seeing a great actor developing his craft and an up-and-coming director who would go on to direct Road House, which is an 80’s gem in my book.

Jack’s Back is presented in an aspect ratio of 1.78:1.  The 1080p image is arrived at with an AVC MPEG-4 codec at an average of 26 mbps. I really dug the look of this film.  There is a lot of smoke and mist being used to help manipulate shadows and light that help give this film a lot of depth.  This is one of those instances where the grain that comes with film just helps with the atmosphere of the film and helps remind us that we are watching a film from the 80’s.  This is a beautifully restored print that only shows its age through the visuals and not in any transfer or compression issues.

The DTS-HD Master Audio mono track leaves much to be desired, but it gets the job done. Dan Di Paola contributes to the musical score that consists of the expected 80’s saxophone that seemed to be popular at the time.  With the score it helps with the nostalgic trip back to the 80’s and though the track is mono we do get a bit of depth at times.  The dialog all comes through clear, and there were no moments of hisses or pops.  Considering this came from an older print that isn’t the most popular 80’s title, it held up nicely.

Commentary Track with Rowdy Herrington: Considering the film is nearly 30 years old, Harrington seems to have a sharp memory about all aspects of the film.  He has plenty of stories to share about the up-and-coming star-to-be James Spader and how Herrington’s own career took off with the film.  It’s a fun commentary with a look at how studio films were made nearly three decades ago.

The Making of Jack’s Back: (23:51)  It’s not fair to call this a making of; really it’s a collection of interviews with director Rowdy Harrington, cinematographer Shelly Johnson, and co-star Cynthia Gibb as they sit down in separate interviews discussing their experience with the film.

While the film isn’t perfect, it’s fun late-night movie entertainment.  If you’re expecting a cool Jack the Ripper thriller, you’ll be disappointed.  If you find yourself tossing and turning at night and you want something to keep you up a little bit longer, Jack’s Back is the kind of title you might be looking for, especially if you’re a fan of The Blacklist and want to see some of Spader’s older work.

Brent Lorentson is a horror writer and film critic based out of Tampa, Florida. With a BA in Digital Film, he co-wrote and co-directed Scavenger Hunt. His short stories have appeared in various horror anthologies. In 2019 his short script Fertile Blood will be a part of the anthology horror film Slumber Party. He is currently working on his first novel A Dark and Secret Place set to be released in late 2019. Favorite Films: Taxi Driver, Fight Club, I Saw the Devil, The Wild Bunch, Dawn of the Dead, A Clockwork Orange, Pulp Fiction, Heathers, The Monster Squad, and High Fidelity.
All Hallows’ Eve 2 The Sin Seer