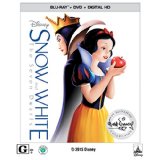 Happy, Grumpy, Sleepy, and Dopey…these are just a few of the words I would use to describe my mood over the last couple of months as I bought and moved into my first house. More importantly — and much more famously — those are, of course, a few of the iconic title characters in Snow White and the Seven Dwarfs, which gets a shiny new “Signature Collection” Blu-ray from Disney this week. Cinedigm boards Noah’s Ark, regales us with Extraordinary Tales, and visits Meadowland. Hallmark accepts us For Better or For Worse, and hounds My Boyfriends’ Dogs. HBO comes to the rescue with Show Me a Hero, while Warner Bros. reintroduces us to The Man From U.N.C.L.E.: Season 2 and goes out of this world with Falling Skies: Season 5.

Dreamworks crosses a Bridge of Spies, and Entertainment One pulls an all-nighter with From Dusk Till Dawn: Season 2. Lionsgate charts the Rise of the Krays, battles in a Fight to the Finish, advocates in Freeheld, and breaks the curse of The Last Witch Hunter. Sony cuts to the chase with The Lizzie Borden Chronicles, while RLJ Entertainment celebrates All Hallows’ Eve 2, and lays eyes on The Sin Seer.

As you can see, we have a busy week to kick off February. That reminds me: we have a new Tuesday Round Up winner to congratulate. That would be Peter S, who wins The Hee-Haw Collection: Kornfield Classics on DVD.

You too can be winner like Peter. Once a month we’re going to give away a surprise DVD title from our archives to a lucky winner who comments in our weekly Round-Up posts. All you have to do is comment in a Round-Up post — like this one! — and tell us which of the featured titles you’re most curious to read about. (Quick reminder: You’re not telling us which title you’d like to win; your free DVD will be a surprise.)