Rise of the Krays

Posted in: No Huddle by Brent Lorentson on February 11th, 2016 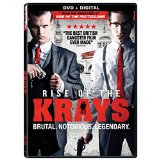 When it comes to British gangster films (or just about any gangster film), you pretty much know what you are getting into: a lot of tough-guy moments filled with violence and characters living their life of excess.  To be honest, going into the film all I knew about the Kray brothers is that they were gangsters in the UK back in the 60’s, and I was pretty sure there was a Charlie Sheen film at one point about them.  With a big-budget American release Legendary, which is also about the Kray brothers, you would hope that the UK version would be able to hold its own and knock this one out of the park.

We are first introduced to Ronnie (Simon Cotton) and Reggie (Kevin Leslie) Kray when they are nothing more than a pair of street thugs who like to fight.  They realize they can use their ability to inflict pain and turn it into a business, and the brothers start to run a protection racket in their neighborhood.  Very early on we see Reggie is the smooth negotiator of the two, and Ronnie is the loose cannon who has an unhealthy passion for violence.

It doesn’t take long to pick up that you are watching a low-budget film.  Not that budget has anything to do with what makes a good film, but the film has moments from start to finish that calls attention to it  Looking past the budget issue, what is front and center is the poor choice in casting.  When you have a budget restraint, it’s understandable you can’t always hire the perfect cast, and you have to make concessions, it’s a struggle every film has.  But I just can’t look past the over-the-top performance that Simon Cotton delivers as Ronnie.  It’s not that his performance is bad; it’s just something you would expect from a stage production with how animated his performance gets.  I don’t blame Cotton for this, but instead this is a fault that hangs on the director for not reeling his actor in.

There are moments that start off so silly that as the scene progresses and attempts to take a serious turn the moment is ruined because you’ve already been pulled out of the reality the film is trying to put you in.    An example of this is before the brothers enter a building they have to stop and take a moment to look at each other before going in.  It’s an attempt to show us the brothers are on the same page and ready to commit some serious violence, but the connection between these two is never felt.  Not once did it ever feel like I was watching two brothers, much less two guys who could ever put up with one another.

As the film continues to show the Krays and their rise of power in the London underworld, the only thing that seems to be conveyed is how much of a lunatic Ronnie is and that he has no problem killing anyone.  I get it, they were a violent pair, but the depiction we see of the brothers just doesn’t ring true; all we see is the violent side of the Krays here and never a glimpse as to how they really could have become such a powerful duo.  It’s as though the filmmakers wanted to make the brothers larger-than-life anti-heroes rather than tell a true story.

This is a perplexing film; while the film is far from being an awful film, it just doesn’t come close to touching so many of the classic crime stories we’ve come to love.  If you’re looking for a mindless action piece this might satiate that urge, but if you were hoping for an enduring period piece, do yourself a favor and lower those expectations.

Brent Lorentson is a horror writer and film critic based out of Tampa, Florida. With a BA in Digital Film, he co-wrote and co-directed Scavenger Hunt. His short stories have appeared in various horror anthologies. In 2019 his short script Fertile Blood will be a part of the anthology horror film Slumber Party. He is currently working on his first novel A Dark and Secret Place set to be released in late 2019. Favorite Films: Taxi Driver, Fight Club, I Saw the Devil, The Wild Bunch, Dawn of the Dead, A Clockwork Orange, Pulp Fiction, Heathers, The Monster Squad, and High Fidelity.
Love the Coopers (Blu-ray) The Saint: Seasons 1 & 2