Posted in: Disc Reviews by Dan Holland on February 11th, 2016 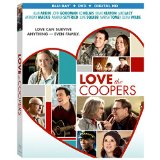 “Ah, the holidays. The most wonderful time of the year. And so begins my tale…”

Love the Coopers seems to be a holiday title that arrived a little later than expected at the Upcoming Discs hub. Within the first five to ten minutes, you come to realize that it is a family-oriented holiday film with a rather impressive A-list cast, consisting of Steve Martin, John Goodman, Diane Keaton, Alan Arkin, Ed Helms, and Olivia Wilde. If you aren’t already a fan of any of these actors and actresses, the film’s story is endearing, as are most holiday films. However, what sets this film apart from other holiday titles (for me, anyway) is the hauntingly accurate idea of a “family” being a bleak entity, as well as atmosphere, that we all must learn to love in our own ways. For some this might come easily, but for others, it can be a slippery slope to ascend. Love the Coopers foregrounds each character’s journey up this slope and provides a satisfying conclusion for each.

The film’s synopsis is as follows: multiple generations of the Cooper family come together for a Christmas dinner and do their best to put on a smile for their family members, even though they all harbor negative emotions towards one another. Charlotte and Sam (Keaton and Goodman) are married, but through years of raising children have grown apart. Hank (Helms), their son, is recovering from a divorce and losing his job; while Eleanor (Wilde), their daughter, feels driven away by their personal desires for who she should be. Each character is given their own story arch which is briefly narrated by Rags the dog (Martin).

With a cast like this one, you can expect the acting to be done well. I loved almost every single performance. Goodman always impresses me by communicating his emotions through subtle mannerisms that we typically take for granted. Although Keaton does not deviate far from her acting style, I have always considered her a very strong performer. Every actor in the film delivers a fantastic performance, but seeing those two veterans work out chemistry together was phenomenal. Now, when I say I loved “almost” every single performance, I am referring to Steve Martin’s role as the narrator. He did not do a bad job of narrating by any means, but his presence really took away a lot of my enjoyment. So really, through no fault of Steve Martin, vocal narration was completely unnecessary and served more distraction than it did storytelling.

Is an unnecessary narrator enough to affect my overall rating of the film? Yes, it completely is. Every single time I was absorbed into what was happening on screen, Martin’s voice came in and began to tell me exactly what was happening (or what was going to happen next) in the story. The movie itself is strong enough to be its own guide. However, every time I heard Martin’s voice, I was reminded that I was, in fact, watching a movie. With each of these interruptions, I came to realize that the film is almost two hours long, which is most likely an unnecessary length. I can think of two to three scenes that could have been cut out for length, but I probably would not have noticed them as easily if I hadn’t been jarred out of the story by The Jerk.

Love The Coopers is presented in its original aspect ratio of 2.40:1. The 1080p image is arrived at with an AVC MPEG-4 codec at an average 25 mbps. This high-definition image presentation delivers a pretty natural looking print. Unfortunately, there’s something very sterile about the image and the cinematography. Even with great establishing shots of the Pittsburg locations, it all looks rather flat. Somehow the image never draws us in. It’s a flaw of digital that new directors often struggle with. You have to be conscience of the need to bring in some warmth or texture or it looks like video. Love The Coopers looks like video. There’s a good level of sharpness and detail, naturally, but no texture. Black levels are fine and will offer quite enough shadow definition to get by.

The DTS-HD Master Audio 5.1 is strictly there to serve the dialog. There’s nothing aggressive here, which is totally appropriate to the material. You can hear the dialog fine, and what more do you really want here? Surrounds are strictly small ambient stuff, and the score relies a lot on source music.

Making The Coopers: (12:12) Cast and crew mostly talk about the characters and where they see them in their lives. The end becomes a Jessie Nelson love-fest.

Fun On Set: (:54) Even shorter look at the production from the young kids’ point of view in the cast.

Music Video: (3:21) The Robert Plant & Alison Krauss song The Light Of Christmas Day plays to film clips. No appearance by the artists themselves.

As I said before, the biggest enjoyment I had from this film was a combination of the fantastic acting and the accurate portrayal of the bleakness within familial relations. The film doesn’t conclude by just wrapping all the problems up in a pretty bow; rather, it allows you to watch the drama unfold and reflect on your own experiences. Each story is very relatable, and each character (even the minor characters) has a story that is realistic. I wouldn’t deem this a “Christmas Classic,” but it is definitely a film that I would watch again next Christmas season.

Convergence (Blu-ray) Rise of the Krays