Posted in: Contests by Gino Sassani on February 15th, 2016 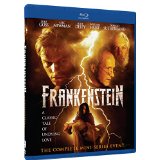 Our good friends at Mill Creek have sent over a few goodies for our readers here at Upcomingdiscs. They’ve managed to stitch together a sweet prize with Frankenstein: The Mini Series on Blu-ray. This little television version of the Mary Shelly classic stars William Hurt, Donald Sutherland and Luke Goss and is sure to chill you for the upcoming Spring.

Be sure to check out Mill Creeks latest slate of releases. Just bang it here: Mill Creek Releases

Gino Sassani is a member of the Southeastern Film Critic's Association (SEFCA). He is a film and television critic based in Tampa, Florida. He's also the Senior Editor here at Upcomingdiscs. Gino started reviewing films in the early 1990's as a segment of his local television show Focus. He's an award-winning recording artist for Omega Records. Gino is currently working on his 8th album Merchants & Mercenaries. Gino took over Upcomingdiscs Dec 1, 2008. He works out of a home theater he calls The Reel World. Favorite films: The Godfather, The Godfather Part II, The Body Snatcher (Val Lewton film with Karloff and Lugosi, not the pod people film), Unforgiven, Gladiator, The Lion King, Jaws, Son Of Frankenstein, The Good, The Bad And The Ugly, and Monsters, Inc.
Steve Jobs (Blu-ray) WKRP In Cincinnati: The Final Season