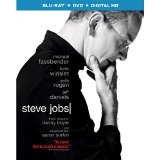 “It’s like five minutes before every launch, everyone goes to a bar, gets drunk, and tells me what they really think of me.”

During the final act of Steve Jobs — which is less of a biopic and more of a three-act performance piece inspired by the visionary Apple co-founder — the movie winks at its own gimmicky premise. The cheeky reference to the film’s rigid, laser-focused structure is appropriate given that Jobs obsessively measured the design his own products down to the millimeter. The result is a movie that wonderfully mirrors its protagonist: Steve Jobs is enthralling, endlessly imaginative, and kind of exhausting.

“They don’t know what they want until you show it to them.”

Now you might be saying to yourself, “Isn’t there a Steve Jobs documentary out right now?” or “Didn’t we *just* get a Steve Jobs biopic a couple of years ago?” (And also, “Am I hallucinating or did that thing star Ashton Kutcher?!”) But the tragic irony of 2013’s Jobs is that it took one of the 20th century’s greatest, most influential innovators and plopped him into a standard Hollywood biopic. While that previous film skimmed over 27 years’ worth of milestones — from 1974 to 2001 — Steve Jobs is up to something entirely different.

This new film is written by Aaron Sorkin (The Social Network) and directed by fellow Oscar winner Danny Boyle (Slumdog Millionaire). Ordinarily, I’d reverse the writer and director’s name when discussing a movie, but Steve Jobs is very much the creation of its screenwriter, who is at his most inspired when he’s depicting highly intelligent professionals dealing with various crises. Steve Jobs begins in 1984 and concludes in 1998, which at first glance doesn’t seem that much more compressed than the 27 years covered in the previous biopic. However, the ingenuity comes from the decision to use three key moments within that time period to capture a snapshot of Jobs’ life.

“I play the orchestra.”

The film opens in 1984, minutes before the launch of the Macintosh and shortly after the premiere of Apple’s iconic, Ridley Scott-directed 1984 commercial. (Which may or may not have starred skinheads.) The action then segues into 1988, right before Jobs (Michael Fassbender) is set to debut his NeXT Computer following an acrimonious split from Apple. The film concludes with the 1998 introduction of Jobs’ trademark black mock turtleneck/jeans combo the iMac after his triumphant return to Apple.

Steve Jobs is predictably crammed with hyper-literate, overwritten monologues and razor-sharp one-liners, but one of the movie’s underrated pleasures is picking up on the story’s recurring gags and visual cues. (The first launch takes place in a raucous college auditorium and the final one is set at San Francisco’s Davies Symphony Hall.)

Each time period is essentially populated by the same exact characters, so it makes sense for Jobs’ wrangler/gatekeeper Joanna Hoffman (Kate Winslet) to become progressively more stressed until she unravels in the final act. Same goes for Apple co-founder Steve Wozniak’s (Seth Rogen) never-ending quest to get Jobs to acknowledge the financially successful — but artistically uninspired — Apple II team. There are also more lighthearted touches, like the way Jeff Daniels seemingly pops up out of nowhere each time as Apple CEO John Sculley. There is also some amusing confusion involving the two “Andys” (Hertzfeld, played by Michael Stuhlbarg, and Cunningham, played by Sarah Snook) on Jobs’ staff, with Hertzfeld becoming progressively balder each chapter.

The filmmakers are also canny enough to realize the movie’s professional stakes wouldn’t provide enough drama. (We all know how the iMac turned out; and the fact that I personally didn’t even remember the NeXT computer told me that launch probably wasn’t super successful.) As a result, each time period also incorporates Jobs’ relationship with his estranged daughter Lisa (played at various ages by Perla Haney-Jardine, Ripley Sobo, and Makenzie Moss) with former girlfriend Chrisann Brennan (Katherine Waterston). More than anything involving a Mac, Jobs’ gradual acceptance of his daughter — whose parentage he denied for the longest time — provides the emotional arc for the film.

It’s a decision that has courted controversy, and it’s not really difficult to see why. Although it is loosely (and I do mean *loosely*) based on Walter Isaacson’s “Steve Jobs” book, Steve Jobs shines a withering spotlight on the sort of damning personal failings many other biopics — even ones people really enjoy, like A Beautiful Mind — tend to leave out. The movie may not depict every key moment in Jobs’ life on screen — and it only briefly flashes back to the famous garage where Apple was born — but it still finds clever ways to nod to them. (Including the fact that Jobs was adopted, and the permanent effect it may have had on his psyche.)

While Steve Jobs is definitely interested in the transformational effect that psyche had on consumers throughout the world, it doesn’t fully dig in to explore precisely how/why that happened. We get some compelling contradictions: Jobs is perceptive enough to place the emphasis on the “personal” in “personal computer” — which is why the Macintosh’s floppy disk drive looks like a mouth and its creator is maniacally obsessed with it saying “Hello” once it’s turned on for the first time — but he is myopically indifferent in his one-on-one interactions. Jobs is likened to Igor Stravinsky and Bob Dylan, but the comparisons are a little hollow because we already knew the Apple creator was ahead of his time. (He’s more amusingly compared to Julius Caesar.)

I reckon Sorkin’s firebrand script will — for better and worse — get most of the attention but the writer once again benefits from being paired with an equally imposing visionary. With The Social Network, Sorkin found an excellent partner in David Fincher, and this time around Danny Boyle’s subdued visual flair helps keep the audience exhilarated. (Steve Jobs clocks in at 122 minutes, which is much meatier than the TV-sized bites of Sorkin most people are used to. I mean, even the people who saw his plays got an intermission.) The most immediate visual tic is the heavy grain/digital noise employed during the 1984 sequence, which is actually more distracting than immersive. I much preferred Boyle’s smooth transitions from one time period to the next — punctuated by bold, blocky text — and the verve he brought to the concert-like presentations. The highlight comes in the 1988 sequence, which features both an expertly-edited back and forth that chronicles Jobs’ “firing” by the Apple board of directors (which is made to look especially malevolent) and a neat projection on a hallway wall as Jobs recounts the story of Skylab.

Fassbender isn’t the first actor I would think of to play Steve Jobs; actually, it turns out he wasn’t the first actor the filmmakers thought of either. Of course, if you were going on physical resemblance alone, then Kutcher’s casting as counterculture-era Jobs was Oscar-worthy. This film portrays the icon at a later point in his life, and the fact that Fassbender might be a shark serves the purposes of this film perfectly since his version of Jobs is a commanding egomaniac who might die if he stops moving (and innovating). The actor is riveting throughout, letting us see the occasional cracks in his inherent iciness. Rogen’s warm, open-hearted work serves as a pleasing, effective counterpoint. At first he seems to be playing Wozniak like a wounded, loyal puppy, but he’s revealed to have some bite. Winslet mostly has a thankless role as Jobs’ primary sounding board, but the actress’s stature and sturdiness keep her from being a doormat and make Joanna a worthy confidant. Meanwhile, Daniels is a hoot and mostly here because he can probably recite “Sorkin-speak” in his sleep after three seasons of The Newsroom.

Steve Jobs is presented in an aspect ratio of 2.40:1. The 1080p image is arrived at with an AVC MPEG-4 codec at an average of 32 mbps. To convey the movie’s three different time periods, Boyle shot the 1984 segment in 16mm film, the 1988 segment in 35mm, and the 1998 segment in HD. While the movie’s grain structure for its opening act was almost distractingly heavy during my theatrical viewing of this film, that effect is much more subtle on this Blu-ray from Universal. (That being said, we still get some neat bits of intentional artifacting that are gone during the other parts of the film.) As a result, the different film stocks feel less like a gimmick and more like a fluid presentation. Not surprisingly, the clarity and detail are terrific by the film’s final act. Black levels offer strong separation, which helps during the murkier bits when Jobs is walking (and talking) through the bowels of the auditorium/opera house.

The DTS-HD Master Audio 5.1 track is obviously quite dialogue heavy, but there’s more here than meets the eye ear. Similar to the different film stocks for the three different time periods, the music in each segment reflects its setting. So we get a synth-heavy score in 1984 (which quietly brings the subs to life), while the 1988 segment set at War Memorial Opera House features a more, well, operatic score that blasts out of the entire sound field. In addition to cranking out Daniel Pemberton’s versatile score, the rear speakers include flashes of dialogue (news reports, etc.) during the brief transitions between time periods. There’s also a strong sense of the backstage hustle and bustle at these launches. For a dialogue-heavy Sorkin film, this sonic presentation is terrifically vibrant.

Inside Jobs — The Making of Steve Jobs: (44:11) This slick, three-part featurette offers a pretty comprehensive look at this unusual biopic. Sorkin admits he came up with the movie’s structure because he didn’t think he could add anything new to the standard “cradle-to-grave” biopic format. Meanwhile, Boyle and the rest of the cast and crew marvel at Fassbender’s ability to memorize the entire script. (Although Daniels jokingly complains about Fassbender getting much more time to prepare than Daniels had for The Newsroom.)

We also see some behind-the-scenes footage, including Boyle merrily whipping a crowd of extras into a frenzy. The director admits to feeling some kinship toward Jobs, since filmmakers in charge of large-scale productions essentially “play the orchestra.”

Feature commentary with director Danny Boyle: The director cheerily guides us through the film, and his energy is infectious. Boyle is predictably generous with his praise for the cast and the rest of the crew, but he’s also insightful in pointing out some of the alterations to Sorkin’s script. I came away from this track with a greater appreciation for Boyle’s dynamic visual work in such a talky movie. Definitely recommend you give this a listen.

Feature commentary with writer Aaron Sorkin and editor Elliot Graham: And speaking of the alterations to Sorkin’s script, this track has the writer gently grilling the film’s editor about the reasons for some of the changes. (Including the Arthur C. Clarke prologue that opens the movie.) It’s a good-natured discussion in which Sorkin admits to being skeptical of some of Boyle’s ideas (like projecting Bob Dylan lyrics on the wall and floor), but he was exceedingly pleased with the final product. This track is just as good — if not better — than the one with Boyle.

I’m not under the delusion that the events depicted in the film — or in any Hollywood biopic — precisely followed real life, but “wouldn’t it be great if that was the story behind it?”