Posted in: Disc Reviews by Gino Sassani on February 16th, 2016 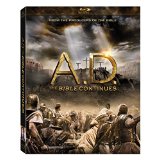 In 2013 husband-and-wife production duo Mark Burnett and Roma Downey teamed up to bring The Bible to the History Channel. The 10 episode series gave as a whirlwind tour of the milestones from the Bible and brought about some critical acclaim along with solid ratings. It aired during Easter/Passover season. It was certainly an ambitious project and left the team feeling they could do more with the project. They managed to strike a deal this time with NBC to air a sequel of sorts to the mini-series. Enter AD The Bible, which takes an opposite approach to the first show. Instead of cramming thousands of years into just 10 episodes AD spreads out quite a bit, offering us 12 episodes on just the first years after the death and resurrection of Christ. We’re basically talking the book Acts of the Apostles. It’s the story of the birth of Christianity and the early work done by the followers of Jesus. If you felt rushed the first time, this is the series you’ve been waiting for.

There were a few obstacles to overcome to bring the series to television. Diogo Morgado was not available to reprise the role of Jesus this time around. This led to a rather radical decision that appears to have paid off. Juan Pablo Di Pace takes over the role admirably.  If they were going to replace Christ himself, why not start with a fresh cast all around? That means that every part that was also shown in the first series has been recast. This includes the role of the Virgin Mary, who was originally played by series producer Roma Downy. Credit the filmmaker for understanding that making an exception for herself might have sent the wrong message. It also was the kind of distraction a series like this really doesn’t need.

It seems that the Good Book has been pretty good source material for television these days. Several television and film projects have come our way in recent years. The Bible is always going to be a tough subject. You’ll have the anti-religion critics complaining about the material along with many devout followers who will take offense with any dramatic liberties taken with the material. If you think the recent fight over the authenticity of the latest Steve Jobs movie was brutal, just imagine what happens when you start playing with people’s fundamental beliefs. It’s a hard tightrope-walk to make, and AD The Bible Continues appears to have accomplished that rare feat.

The series begins with a little overlap. We revisit the trial and crucifixion of Christ, but this time we see it more through the eyes of his followers. It’s a nice transition from one perspective to that of the founders of the church Christ would leave behind. From here the story begins to be told from three different perspectives.

Of course, there are the remaining apostles themselves. They are dealing with the reality that their teacher is dead, and they are hunted in the streets of Jerusalem. When confronted with his resurrection, there are the human doubts and the eventual conviction inspired by a visit from the Holy Spirit to spread the word. This perspective is led naturally by Peter, played wonderfully by Adam Levy. Levy leads Peter on an amazing journey of emotions. From sorrow to bewilderment to conviction, Peter is changed by these experiences much as the entire world would be in the years to follow. Levy delivers each of these moments of character evolution and sells it each time.

The second point of view is that of the Jewish community, particularly the elite priests. This view is most powerfully delivered by Richard Coyle in the role of High Priest Caiaphas. He’s afraid of the threat to his traditions and personal power if the message of Christ takes root. He’s also caught in a tough alliance with his land’s occupiers from Rome. Coyle brings us a man who is almost always in conflict but who must also always act with confidence and authority. There’s a morality beneath it all that makes a kind of sense, and the part can easily be seen from both a villain and hero angle. Those kinds of complicated characters are always interesting and cast well here.

The third perspective is that of the Romans. Who else but Pilate can tell that story? Vincent Regan completes this show’s acting trinity to bring us three parts of a very complex world. Pilate wants nothing more than to ascend to something higher, an ambition placed in jeopardy by the changing power within Rome itself. Tiberius dies, leaving the mad Caligula (Gower) in control. It’s bad news for Pilate and bad news for the delicate balance of power in Jerusalem when he demands that his golden likeness be placed inside the Temple of Jerusalem. It’s an impending catastrophe that finds Christ’s followers in the middle of world-changing events.

These three points of view keep the series interesting. It’s the intricate interactions of these three cultures that provide a backdrop that will entertain you regardless of your faith. It’s as much a political period piece as it is religious epic. The casting of these three actors is central to any of that coming together. A weak link in any role would take away from this story tremendously. I found myself drawn to these characters and their divergent worlds as much as anything else.

The production also benefits from extraordinary production values. The team went to the deserts of Morocco, which resembles the geography of ancient Judea in amazing ways. There they constructed one of the largest working sets on television. They actually constructed a portion of Jerusalem with real buildings and streets. The expense pays off by offering the shooting crew the kind of access that lends authenticity to everything. When characters go from outside to the inside of a building, the actors are actually able to do just that. Ordinarily the exterior of a door is shot one place while the interiors are somewhere else entirely. The fluid ability helps actors inhabit their characters while offering directors the ability to use longer shots and create momentum in their scenes. It also creates a rather beautiful cinematography using the natural surroundings of the locations. It cuts down on computer-generated images, which can be all too easy to spot on a television budget. Certainly, there is a ton of computer f/x here, but they can be concentrated more on set extensions than recreating details on a non-existent environment.

Give the writers credit for adding credibility to the material. One of the most extraordinary examples in the conversion of Saul (Scanlan). Every depiction I find makes this all too unrealistically instantaneous. I love that a good deal of time is spent showing Peter and the other apostles having some suspicions about his convenient conversion. Of course, they would expect a trap. I love the way they must struggle with Christ’s teachings of forgiveness and their own human feelings about accepting a man who appeared obsessed with their persecution. Belief and practice do not always easily follow each other. It’s perhaps one of the strongest elements of the story.

Each episode is presented in its original broadcast aspect ratio of 1.78:1. The 1080p image is arrived at with an AVC MPEG-4. There are only four episodes per disc, which allows for nice compression rates and a pretty solid high-definition image presentation. There are some fabulous vistas here, and they look truly inspirational. The sharpness and detail bring out the careful attention to those details. There’s nice texture here that works for both the costumes and the sandy and dirty environments. Black levels are pretty solid. I wouldn’t say there are many truly inky blacks here, but the shadow definition is still quite strong.

The DTS-HD Master Audio 5.1 is mainly here to serve the dialog. There’s a pretty solid score to be found, and it’s certainly dynamic enough, but it’s the performances of these actors that shine here, and the audio presentation allows nothing to interfere with that. Surrounds aren’t aggressive, but they do offer enough subtle ambient sound to be rather immersive.

Continuing The Bible: (5:41) Downey and Burnett talk about their decision to continue the story and mostly about their passion for the material. Downey carries most of the weight here. There is some behind-the-scenes footage, but it’s all too brief to be that informative.

Casting AD: (11:20) The cast is one of the best elements of this series. The actors provide some input in how they got the job as well as insight into their characters.

The Past Comes Alive: (14:41)  The feature focuses on the Morocco locations. Cast and crew talk about the logistics of shooting in the middle of the desert. They lived close to each other, and many talk about the bonding experiences they shared.

Recreating The Power Of God: (5:38) This feature looks at the f/x of the series.

Gino Sassani is a member of the Southeastern Film Critic's Association (SEFCA). He is a film and television critic based in Tampa, Florida. He's also the Senior Editor here at Upcomingdiscs. Gino started reviewing films in the early 1990's as a segment of his local television show Focus. He's an award-winning recording artist for Omega Records. Gino is currently working on his 8th album Merchants & Mercenaries. Gino took over Upcomingdiscs Dec 1, 2008. He works out of a home theater he calls The Reel World. Favorite films: The Godfather, The Godfather Part II, The Body Snatcher (Val Lewton film with Karloff and Lugosi, not the pod people film), Unforgiven, Gladiator, The Lion King, Jaws, Son Of Frankenstein, The Good, The Bad And The Ugly, and Monsters, Inc.
Saints & Strangers The 33 (Blu-ray)