The Beast – The Complete Series 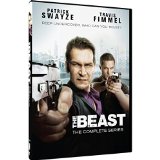 “Take hope from the heart of a man, and you make him a beast or prey. And the beast eats away at you if you’re not careful. The beast will eat it all, and you will have nothing, and you are nothing.”

Patrick Swayze stars as Charles Barker, an FBI undercover specialist. He handles the deep cover missions, the kind that require a total commitment to the mission. He’s the kind of agent whoknows where the line is so that he knows where to cross it. He’s a grizzled veteran. His new partner is young Agent Ellis Dove, played by Australian actor Travis Fimmel. Ellis is a bit uncomfortable with Barker’s all-in approach. Still, he’s a loyal student and will do what it takes to catch the bad guys. The two agents are handled by an agent named simply Conrad. Conrad is played by everyone’s favorite comedy relief from the new Mummy films, Kevin J. O’Connor. He was the cowardly rascal Beni in those first two films. Each episode brings us a special set of circumstances where the FBI feels Barker’s special brand of work ethic might work. Still, the feds are a bit worried about just how far he has gone over that line. They try to get Ellis to snitch on his new partner to no avail. Larry Gilliard, Jr. plays Ray, the persistent internal affairs agent who wants the goods on Barker.

Examples of the types of missions the two engage upon are: an eastern European prostitution and white slavery ring, a kid infected with a deadly disease to get his mother to rip off a valuable jewel collection, suspicious suicides of Iraqi vets, a math professor suspected of selling defense secrets to the Chinese, a high-profile international political assassin, and an Irish mob family. Barker lives up to his name. He’s usually barking orders to Conrad and Ellis without explanation. He definitely has trust issues.

Barker is one of a trend of new television characters that are not necessarily good guys. Examples of crossing the line include murdering suspects, torching a crime scene, planting or tampering with evidence, and he’s even suspected of war crimes from his previous life in Special Ops. In a lot of ways he reminds us of The Shield’s Vic. I like to call him Vic light, because Barker is too closed up, and his motivations are not ever really clear. In trying to create a mysterious persona, the creators of the show have made him a lot less interesting and certainly not someone we ever completely care about. In the last couple of episodes the series got bogged down in a complex and unnecessarily convoluted mythology. The show broke away from the “case of the week” formula and became impossible to truly follow. Whatever interest the show might have generated was likely squandered by then, and the show was not renewed, even though we do end this season in a cliffhanger of sorts.

Patrick Swayze used to be something of a sex symbol in the old days. Now his looks couldn’t have evaporated more. He looks pretty rough. Fortunately, what he lost in appearance, he gained in thespian skills. I found him quite convincing, even if the character itself wasn’t well rounded enough to really care. Unfortunately Travis Fimmel is pretty bad here. He does nothing but mope around his lines and appears to have a limited acting toolbox to draw upon. He tries hard to hide the accent, but it comes through on more than a few occasions. O’Connor actually shines with his limited screen time. I didn’t even recognize him at first, but it’s that distinctive voice that gives him away.

The one thing that this show did have going for it was pretty high production values. A lot of it is lost with cramming too much time on a single DVD, but the craftsmanship does shine through. Many times you hear television show runners talk about how they’re making a 45-minute movie with each episode. I hear it so often that it’s become a meaningless cliché anymore. Here they could very much make that statement with some authority. The locations are fabulous, and the canvas is always large and cinematic. This crew knows what they’re doing.

The show certainly had a lot of potential. The production values, and some intense acting by Swayze left room for a heck of a series. Unfortunately, it really couldn’t get out of its own way. The pacing was awkward, to say the least. It was up and down with too many elements not clear enough. It confused the casual viewer, and in today’s market with so many other things to watch and do, you simply can’t afford to do that. It had its adrenaline-filled moments, but still, “It came and went with a whimper”.

Gino Sassani is a member of the Southeastern Film Critic's Association (SEFCA). He is a film and television critic based in Tampa, Florida. He's also the Senior Editor here at Upcomingdiscs. Gino started reviewing films in the early 1990's as a segment of his local television show Focus. He's an award-winning recording artist for Omega Records. Gino is currently working on his 8th album Merchants & Mercenaries. Gino took over Upcomingdiscs Dec 1, 2008. He works out of a home theater he calls The Reel World. Favorite films: The Godfather, The Godfather Part II, The Body Snatcher (Val Lewton film with Karloff and Lugosi, not the pod people film), Unforgiven, Gladiator, The Lion King, Jaws, Son Of Frankenstein, The Good, The Bad And The Ugly, and Monsters, Inc.
The Hobbit: The Battle of Five Armies Extended Edition (Blu-ray) Grandma (Blu-ray)