The Hobbit: The Battle of Five Armies Extended Edition (Blu-ray)

Posted in: Disc Reviews by Gino Sassani on February 17th, 2016 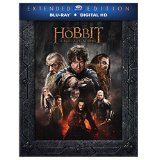 It’s time to say goodbye to Middle Earth, at least from a cinematic perspective. The Hobbit: The Battle Of The Five Armies marks the last time we shall see Peter Jackson’s version of Middle Earth. Sure, Ian McKellen has told us he wouldn’t be surprised to see some kind of a return. I would. There is certainly enough work from Tolkien to support future adventures, but the rights to anything beyond these books belongs to the Tolkien estate. To say they are not very fond of Jackson, New Line, Warner, or the six films themselves would be an understatement. There is great animosity there, and no amount of money is going to change that.

The Battle Of The Five Armies does a rather splendid job of giving us closure. Jackson avoids the trap he fell into when he closed out the Lord Of The Rings trilogy. This time we’re spared several endings piled one on top of the other. This film ends perfectly while still leaving us wanting more. That desire will have to be satisfied when the extended version is released, likely near next Christmas. I for one am looking forward to running the extended versions of all six films in their chronological order at that time. It’s a daunting task, but one I am determined to attack.

The Battle Of The Five Armies picks up exactly where we left off last year with The Desolation Of Smaug. His confrontation with the dwarves over, Smaug hurries to Laketown where he relishes the idea of inflicting his own brand of death and destruction. The residents flee or die, and it is up to Bard (Evans) to make up for the unfinished job of his ancestor. The devastation drives the refugees toward the Lonely Mountain in hopes of claiming the portion of gold they were promised by Thorin (Armitage). But a sickness has descended on Thorin from the gold. He has become obsessed and will not part with a single coin. His determination to fight rather than yield any of his hoard sets the small company of dwarves up against an army of men and the army of the Elf-King Thranduil, who doesn’t need much of an excuse to attack the dwarves. After an added perceived betrayal by Bilbo (Freeman), it looks like a dark future for Thorin and his kin. That is until his cousin Dain (Connolly) arrives with a mighty dwarf army. But they will all need to fight together when an overwhelming army of Orcs attacks, led by Thorin’s familial enemy Azog (Bennett).

It is this epic battle that dominates a full two thirds of the film’s 144-minute running time. The scope of this battle makes this film the most like The Lord Of The Rings of all three Hobbit films. We see the familiar fighting prowess of Orlando Bloom’s Legolas that was so much a part of the first trilogy. We are even treated to a scene that sets him on the path towards the events of those films. That’s really where this film plays out its purpose effectively. It is not the better of the Hobbit films, but it is the piece that brings it all so well together. It functions as that touchstone between the works that I think will be even more evident when I finally do watch them all together late next year.

The film has its share of new characters for the screen. Thorin’s cousin Dain is played with great flair by Billy Connolly. He has one of those wonderful voices that make him instantly recognizable even if his physical features are lost beneath the makeup. While not new to this particular film, Evangeline Lilly gets some powerful emotional payoff for her Tauriel character. Her relationship with Aidan Turner’s Kili is a bonus found in the films and not really a part of the Tolkien story. It’s one of the more compelling elements of the battle’s aftermath, rivaling the fates of more than one central character. If you know the book, you already know it’s not a particularly happy ending. Relief might be a better description after the film’s central battle-fatigue elements. Of course, Thorin’s final encounter with Azog does a good job of incorporating elements central to the original story, all the while giving us those cinematic moments that are required in an action film.

The Hobbit: The Battle Of The Five Armies is presented in an aspect ratio of 2.40:1. The 1080p image is arrived at with an AVC MPEG-4 codec at an average 25-30 mbps. For some reason Warner Brothers did not provide us with the 3D version of the film, so there is some disappointment when compared to my two press screenings of the film. This version is more akin to the 24-frames version and does fit quite nicely with the other trilogy. The high-definition image presentation will be a guaranteed show-off film for your system.  This is a lush and stunning environment that deserves to be explored in this depth. There is great beauty in this high-definition image presentation. Textures stand out in every frame. The same care that went into every little detail in production is put on showcase for your viewing pleasure at home. This is likely one of those films that was made to showcase the upcoming 4K home releases. It’s hard for me to imagine a home image much better than this. Black levels are the deepest and truest representations you’ll find…once again. This is truly a show-off piece for your equipment. Lucky me, I am also in the process of putting Oppo’s BD-103 DARBEE edition through its paces. High-end equipment like that is what films like this were made for.

The DTS-HD Master Audio 7.1 is just as much a show-off for your system. Jackson has created a sound field that truly wraps you in a 360-degree environment. The result is an extraordinary feeling of placement and an immersive experience unlike any film I’ve reviewed on home video in any format. Dialog is always clear and placed exactly where you expect it. The surrounds complete the effect with their often thrilling boldness. The battles offer you incredible surround experiences. It might be the clash of metal or the squish of body parts being severed. You might catch just the slight glance of the wind off a sword. The subs deliver ground-shaking lows throughout.

There is 20 additional minutes in the extended version.

The first Blu-ray contains the film only.

There are two additional Blu-ray discs with the 11th and 12th parts of the epic’s Appendices.

Appendices Part 11: (4:52:49) Yes, you saw that correctly. This five-hour documentary takes you everywhere the film goes from locations to sets. You’ll basically watch the film over again but this time from behind the scenes. Nothing is forgotten here. You’ll follow the production for pretty much every scene in the movie. A huge highlight is watching Christopher Lee talking about being remembered. It’s likely some of the final footage from the iconic actor. There’s a tense moment as the crew is almost stranded overnight on a cloud-enshrouded mountain top. It’s not just the positive stuff. Because Jackson was not the original Hobbit director he lost 18 months of pre-production time. It catches up with him by the time they need to film the actual battle. Production was shut down early and Jackson took a year to work it all out. Of course there are the many actor wraps and the requisite celebrations.

Appendices 12: (5:00:14) This one is even longer but is split into only 4 segments. The first continues the production diary approach for the actual battle and material for the extended version. The second looks at the three Elf characters he third delves deep into the art design of the films. There’s also a ton of Tolkien philosophy, symbolism and imagery. The final section is a kind of goodbye to 15 years of Tolkien on screen.

Butt-Numb-A-Thon: (11:43) A surprise birthday video for Harry Knowles host of Austin’s Butt-Numb-A-Thon festival. It features many cast and crew in a mockumentary visit to the set. And a little help from Gandolf to get to the parties.

Andrew Lesnie Remembered: (5:47) No individual tribute to Christopher Lee but he’s not the only member of the cast and crew lost since production. Andrew Lesne was a cinematographer for the films. Feature provides some footage of him in action often with Christopher Lee during production.

Gino Sassani is a member of the Southeastern Film Critic's Association (SEFCA). He is a film and television critic based in Tampa, Florida. He's also the Senior Editor here at Upcomingdiscs. Gino started reviewing films in the early 1990's as a segment of his local television show Focus. He's an award-winning recording artist for Omega Records. Gino is currently working on his 8th album Merchants & Mercenaries. Gino took over Upcomingdiscs Dec 1, 2008. He works out of a home theater he calls The Reel World. Favorite films: The Godfather, The Godfather Part II, The Body Snatcher (Val Lewton film with Karloff and Lugosi, not the pod people film), Unforgiven, Gladiator, The Lion King, Jaws, Son Of Frankenstein, The Good, The Bad And The Ugly, and Monsters, Inc.
A Bucket of Blood The Beast – The Complete Series