Posted in: Disc Reviews by Brent Lorentson on February 18th, 2016 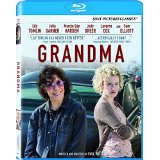 I was a little hesitant with picking up this film.  I wasn’t sure if a film about a grandmother spending the day raising money to pay for her granddaughter’s abortion was a film I could find the humor in.  Well, I’m glad I took a chance on this film; not only does this film have so many layers beneath its overall plot, but it never once attempts to have an agenda towards its audience.  Considering the potentially heavy subject matter, the film instead keeps its attention on what matters most, the people who come in and out of our lives whether they are friends or family; in the end it’s how we treat them that make us who we are.

Elle (Lily Tomlin) is about as feminist as they come; she’s a proud lesbian who is independent and at one time was a successful poet who wrote about feminist themes.  When we first meet her, it is in the middle of her and her girlfriend calling it quits.  Like any breakup, it’s ugly and filled with emotion.  Despite the tough exterior we see Elle trying to hold up, we know it is all an act, and we understand she is still hurt after the loss of her true love of 30-plus years.

Elle has little time to mope once her granddaughter Sage (Julia Garner) shows up on her doorstep asking for her help.  She needs six hundred dollars to pay for an abortion she plans to have by the end of the day.  Without judgement, Elle does what we expect all grandparents to do, to help out as best they can.

The day is spent as Elle and Sage travel around town trying to get the money together.  The easy route and more controversial route would be to spend the film’s running time discussing Sage and her choice.  Instead what we get are the two women spending the day together trying to understand why they are the way they are,  Elle being the over-opinionated and domineering parent, as Sage learns to gain more self-confidence.  But to generalize these characters is such an injustice on my part, because there is so much depth to these characters. The crux that both Elle and Sage must confront is relationship they have with Judy (Marcia Gay Harden), Elle’s daughter and Sage’s mom.

One of the film’s more profound sequences is between Elle and Karl (Sam Elliot), who plays one of Elle’s heartbroken lovers.  Just when we think we have a character figured out, it is a sequence like this that comes along and changes everything but at the same time shows us how true to life these characters are, that they, like all of us, are flawed and make mistakes, and the consequences of our decisions are long-lasting.

While Lily Tomlin puts on a showcase performance here, a tip of the hat needs to be made towards writer and director Paul Weitz (About a Boy and American Pie).  With the film’s running time being a brisk 79 minutes, every minute counts, and despite the short runtime, it never feels like it needed to be any longer.  Weitz has made a career of writing and directing characters that are flawed but well-intentioned, and in the case of Elle and Sage we have some of the best written female characters of the year and also a family drama that is relatable and feels unique at the same time.

Grandma is presented in a 1.85:1 aspect ratio.  The 1080p image is arrived at with an AVC MPEG-4 codec at an average of 28mbps. This is not really the kind of picture you watch for the picture-perfect Blu-ray quality.  What we get here, though, is HD-quality images that show the age and beauty of these characters.  There’s a rather unflattering shot towards the end of the picture where we see a profile of Lily Tomlin, but this image is about the rawness of the moment where we get to see her in all her flaws emotionally and physically, and it is something that is beautifully captured here.  The flipside goes to the shots of Garner, where her youth is beautifully captured as we see her warmth throughout as her skin is smooth and flawless.  Even the warm colors we see Sage in capture her youth before it is tarnished by her decisions of adulthood.

The DTS Master Audio 5.1 track is again not a feature that gets to have much attention drawn to it here, but there are a few moments where we get some nice separation of space.  All the dialog is sharp and clear, and for this type of film it’s just about all you need.

Commentary with Lily Tomin, Sam Elliot, Julia Garner, and writer/ director Paul Weitz: This is one of those commentary tracks that surprised me by the number of dead spots in the commentary.  Considering the amount of people involved and the length of the film, I would have expected this to be a non-stop talk-fest.  What we get, though, is an informative inside look at how the film came together; my favorite little tidbit is learning about the car Elle and Sage travel around town in.

A Family Portrait: Making Grandma: (25:15) Here we have your standard behind-the-scenes look and interview with the cast and crew involved with the film.  For fans of the film, they will appreciate this.

Q&A with Lily Tomlin, Sam Elliot and Director Paul Weitz: (20:58) Here we have a Q & A that seems to have followed a screening at a film festival.  There is a nice chemistry here between the three.

For some the subject matter that drives the film will cause a knee-jerk reaction to possibly overlook this film; don’t let this be the defining factor in your decision on seeing this film or not.  This is one of those gems that comes along that gets overlooked during award season but is genuinely a film that will charm its way into your arms.  Sit back and take a ride with Grandma; after all, everyone enjoys a trip to Grandma’s house.

Brent Lorentson is a horror writer and film critic based out of Tampa, Florida. With a BA in Digital Film, he co-wrote and co-directed Scavenger Hunt. His short stories have appeared in various horror anthologies. In 2019 his short script Fertile Blood will be a part of the anthology horror film Slumber Party. He is currently working on his first novel A Dark and Secret Place set to be released in late 2019. Favorite Films: Taxi Driver, Fight Club, I Saw the Devil, The Wild Bunch, Dawn of the Dead, A Clockwork Orange, Pulp Fiction, Heathers, The Monster Squad, and High Fidelity.
The Beast – The Complete Series Brian Regan: Live From Radio City Music Hall