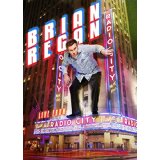 “Tonight’s special is LEG OF LAMB”

I absolutely love stand-up comedy. It is by far one of my favorite forms of entertainment. I would much rather watch a comic’s one-hour special than watch Hollywood’s latest zany summer comedy. I firmly believe that stand-up comedians are a group of modern day philosophers who have taken their analyses of social interactions and created a highly entertaining and intellectual form of art. While I appreciate all comics, currently my favorites are Tom Segura, Todd Glass, Greg Proops, Bo Burnham, and of course, Brian Regan.

For those of you who are not familiar with Brian Regan, I encourage you to briefly open YouTube, type in his name, and click on the first video title that catches your attention (restaurants and UPS are two of my favorites). I would describe him as a veteran stand-up comedian who is well respected within the stand-up community. What I would consider unique about Regan is that he has developed his entire career through absolutely clean sets. He manages to build entire comedic stories without a single swear word (save for a couple hell’s), nor mature content. He develops a unique look on the absurdities he notices throughout life, and as he speaks about them, he applies shifts in vocal inflection as well as bodily movements to punctuate each one of his stories.

In this special, Regan covers food (a popular topic of his), awkward party conversations, and the strange experience of going to a new doctor for the first time. The man has a knack for taking ideas or social situations that we typically take for granted, and dissecting just how absurd the practices are right in front of you. For example, the quote I have used above comes from his questioning of the English language when it comes to food. We are all familiar with chicken legs, yes, but for some reason the idea of lamb as a more prestigious protein merits a more sophisticated title: its not ‘lamb leg’ its ‘leg of lamb.’ However, it’s Regan’s cadence and performance that really drives the joke home every time. I think the quote I have shared is apropos in describing my feelings about Regan: it takes a high level of sophistication to build your career on the foundation of being a ‘clean comic’. I have seen three of his specials, and this one shows signs of maturity within his unique performance style. Tonight’s special was indeed leg of lamb.

In terms of content, I can’t say I’m disappointed with it, but I can say that I think that he has told funnier stories in past specials. There is never a dull moment in Live from Radio City Music Hall, but there was never a moment where I laughed so hard that I cried (as I did with his previous work). Regardless, the special was filmed well, and Regan’s pacing between jokes is always flawless. It is always a pleasure watching a seasoned comedian perform. I also want to commend Regan for steering clear of the new fad of comedians introducing their specials with a sketch that they wrote. Within the last two years, I have seen five or six stand-up specials that practice this, and it sort of detracts from my enjoyment of the special as a whole.

When I watch stand-up comedians, I get a magical feeling inside: a combination of learning and laughing. Brian Regan is an important figure in the stand-up community, because the cleanliness of his act makes him universally acceptable. With this acceptance, he has the potential for a larger, more diverse audience. He is fun for the entire family: kids can laugh at his silly physical performances, and parents can laugh and learn through his thought-provoking content.