Posted in: Disc Reviews by Brent Lorentson on February 19th, 2016 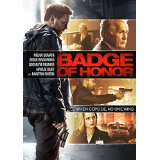 Ever since Narc and Training Day became critical and financial successes, it seems everyone has tried to follow the formula of corrupt cops and their partners trying to do the right thing.  Factor in the society outlook on dirty cops; Badge of Honor at first glance would appear to be a sure-fire hit. Unfortunately, it’s a misfire that never seemed to have much of a chance. When we first meet Jessica (Mena Suvari), she is a beat cop who is called in with her partner checking in \on a domestic disturbance report.  Things get out of hand, and her partner overreacts with extreme force and beats a suspect.  The story jumps ahead, and we now see Jessica working for internal affairs.  It’s her first case that the film wraps around in a sadly predictable way.  Two narcotics officers, Mike (Jesse Bradford) and David (Lochlyn Munro) move in on a bust that goes bad, and in the process an innocent teenager is killed.  David seems well-intentioned when he tries to help cover it up for his partner, but things quickly get out of hand.

Even with Suvari as one of the leads, it’s unfortunate we don’t get to see more of her and the life she leads outside of being a cop.  It’s been a while since I’ve seen Suvari in a solid leading role, and for the screen time she has here she does a great job at selling the part of being a cop who can handle her own.  It’s this execution of the role that has me wishing there was more of her, because everything else just seemed like we’ve seen it all before.

We have seen this story before, and that’s fine, because as the news headlines have shown, there is an issue with dirty cops in the nation these days.  The problem I see with this is that there is so much separation between David and Mike that it’s not believable that these guys would be partners who could ever work well together.  Mike wants to do everything by the book, while David seems to have thrown the rule book out years ago.  Had the characters not been made so extreme, it would have been more believable that they would have one another’s backs in covering up the crime.  And this is before David seems to flip and become a loose cannon.

With a really good cast filling in the roles, Martin Sheen, Natasha Henstridge, and Patrick Muldoon just to name a few, it’s the cast and their performances that keep you engaged in this film.  It’s a gritty film, and it does a good job at staying relevant with the current hot-blooded tabloid environment, but it is lacking the emotional draw to get us to care about these characters enough.  The stakes may be high for all those involved, but there are no real surprises here, and that’s a shame, because with this cast this could have been something far more impactful.

Brent Lorentson is a horror writer and film critic based out of Tampa, Florida. With a BA in Digital Film, he co-wrote and co-directed Scavenger Hunt. His short stories have appeared in various horror anthologies. In 2019 his short script Fertile Blood will be a part of the anthology horror film Slumber Party. He is currently working on his first novel A Dark and Secret Place set to be released in late 2019. Favorite Films: Taxi Driver, Fight Club, I Saw the Devil, The Wild Bunch, Dawn of the Dead, A Clockwork Orange, Pulp Fiction, Heathers, The Monster Squad, and High Fidelity.
Brian Regan: Live From Radio City Music Hall Togetherness: The Complete First Season (Blu-ray)