Posted in: No Huddle by Brent Lorentson on February 28th, 2016 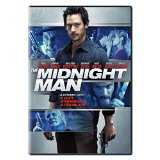 Here is an instance where there was so much promise going into this film, but because of its lack of restraint, it blew an opportunity to be a good film.  The Midnight Man offers up a fun premise, a good cast, and high production values, but what plagues this film is a script that is filled with so much bad dialog you’ll wish you were watching a silent film.  Quick lesson in screenwriting: don’t try to be Shane Black or Quentin Tarantino; they are a class of their own, and to try to copy them only shines a light on how bad your dialog really is.  I’m being hard on this film, because had this film shown some restraint and kept the dialog simple, this could have been a really cool film.

Grady (Will Kemp) is the guy people use when things are about to get messy and you need to have your problem eliminated quickly.  He’s the perfect hitman because of a special gift that he has the ability to not feel pain; the sense of touch means absolutely nothing to him.  Because of his superhuman threshold against the sense of feeling, it has given him bravado that borderline makes him a reckless individual, but still he gets results.

It just so happens on the night Grady is assigned his most dangerous mission, his greatest asset fails him, and he is forced to survive the night and complete a serious of hits as a regular Joe who can feel pain.  The setup, as I said before, is a fun one, and opens up a series of fun opportunities that are sprinkled throughout the film.  Helping Grady get through the night is Zan (Brinna Kelly), who luckily enough for Grady is an EMT so she is able to tend to his quickly growing variety of injuries. Of course, at first these two don’t get along, but we know in the end these two will manage to become best of pals.

The smart move on the filmmakers was to keep the action sequences tight and minimalistic.  Keeping things simple at least made the action feel more realistic, and when it occurs it is more spontaneous.  It would have been nice to see Grady have some bigger fights while he is the man without pain; there could have been some fun moments to be had.

Watching this I felt I was watching a straight-to-video action flick from back in the 90’s.  It had the fun popcorn playfulness that is refreshing from all the serious action flicks that seem to be everywhere.  The tongue-in-cheek factor works so well to the film’s advantage that you can forgive a lot of the film’s problems.  With appearances by Vinnie Jones, Doug Jones, Brent Spiner, and William Forsythe, the talent does help with the likeability of the film, but their appearances are nothing more than a tease that will leave you wanting more of them.

In the end The Midnight Man is an exercise in having a cool concept but just not being able to deliver on the whole package.  It’s not the worst movie I’ve ever seen, but it’s not one I’ll be remembering a few months from now.  If you have an itch for an action film and you’ve exhausted all your options, it’s a film that’s at least entertaining but lacks in the substance department.

Brent Lorentson is a horror writer and film critic based out of Tampa, Florida. With a BA in Digital Film, he co-wrote and co-directed Scavenger Hunt. His short stories have appeared in various horror anthologies. In 2019 his short script Fertile Blood will be a part of the anthology horror film Slumber Party. He is currently working on his first novel A Dark and Secret Place set to be released in late 2019. Favorite Films: Taxi Driver, Fight Club, I Saw the Devil, The Wild Bunch, Dawn of the Dead, A Clockwork Orange, Pulp Fiction, Heathers, The Monster Squad, and High Fidelity.
Gods of Egypt Entertainment (Blu-ray)