Posted in: Disc Reviews by Brent Lorentson on February 28th, 2016 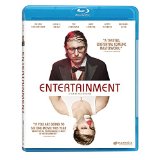 Life on the road as a comic always seemed like it would be the bachelors dream lifestyle: a new town every other night, getting to meet new people and see new sites while getting paid to tell jokes. Well, for the most part I still think it’s a pretty sweet deal, but in the new existential comedy Entertainment, we get a glimpse into what the road life would be if you just happened to be one of the worst comedians to take the stage.  This slow, depressing look at The (unnamed) Comedian (Gregg Turkington) as he attempts to mend his relationship with his daughter doesn’t go for laughs but instead attempts to take an introspective look at its star, and just seems to go nowhere.

As we watch The Comedian in his life offstage, he’s your average guy who seems to be disappointed with his lot in life but seems to embrace the “art” of his craft.  When we see The Comedian take the stage, we see a shift in demeanor as the quiet and meek man turns into crude and obnoxious comedian who stumbles his way through jokes and insults.  It’s a very Andy-Kaufman-esque performance, only lacking the showmanship of his lounge lizard persona, and most importantly, the humor.  What makes the character so frustrating is that it is obvious he’s no good, but yet he does nothing to attempt to improve upon his act, but instead he points the finger at the audience.

The irony of the title isn’t missed here as the film attempts to go out of its way to annoy and upset the audience as though the 102-minute joke is that the filmmakers managed to get the audience to watch this to the very end.  There are moments that are sprinkled throughout the film that tease the viewer that perhaps there is a moment of substance about to occur, but it never happens.  Even with appearances by John C Reilly as the concerned cousin, and Michael Cera uncomfortably soliciting The Comedian in the restroom, the film refuses to allow us to have any hope for its lead character.

The film’s greatest tragedy is in the form of Eddie (Tye Sheridan), who follows along with The Comedian as his opener.  He takes the stage as the silent clown who struggles with his act to entertain his audience but in his own way seems to only have a future that follows in the footsteps of The Comedian. Sheridan carries the burden of being the glimmer of hope with these characters, but it’s accepted that he will continue on this dead-end tour for the many years to come.  For those of you unfamiliar with Sheridan, if you haven’t seen his work in Mud, get ready for him to become a household name after not only being Cyclops in the new X-Men film, but he has also been cast in the new Spielberg film Ready Player One.

While this film was a struggle to get through, what surprises me is how much the characters have stuck with me as I wonder how these characters ended up where they are.  For artists this can be a glimpse at the worst-case scenario if their craft were never to take off, while others will just see these characters as pathetic; either way, both would be right.  The film may find its niche audience with time or those already familiar with Turkington’s work; otherwise, like the films lead character, it’s one that may just bumble its way into obscurity.

Entertainment is presented in a 2.67:1 aspect ratio. The 1080p image is arrived at with an AVC MPREG-4 codec at an average of 28mbps.  The overall look of the film is bland and washed out.  It’s a suitable look considering it is filmed in the Mojave Desert.  The only color that seems to pop in these exteriors is the ridiculous yellow hat The Comedian wears.  The image is sharp throughout, and there are no compression issues here.

The 5.1 DTS-HD Master Audio track is rather uneventful, but where it does have its moments are during the stand-up performances.  The sound comes from the front speakers and works well at attacking the audience as it is with the performance we see on screen.  Thankfully the audio is sharp and clear, since off screen The Comedian has a habit of talking low and borders on mumbling; if not for the quality sound it would have been nearly impossible to understand him.

Deleted & Extended Scenes: For those who just couldn’t get enough of the film and just wanted more of the Comedian and Eddie, well, here are 16 minutes’ worth of footage removed from the film.

I’d have a hard time recommending this one to anyone.  It’s such a unique film that perhaps the oddness of the characters will appeal to some.  If you are looking for something different with some interesting performances, this fits the bill, but still proceed with caution.

Brent Lorentson is a horror writer and film critic based out of Tampa, Florida. With a BA in Digital Film, he co-wrote and co-directed Scavenger Hunt. His short stories have appeared in various horror anthologies. In 2019 his short script Fertile Blood will be a part of the anthology horror film Slumber Party. He is currently working on his first novel A Dark and Secret Place set to be released in late 2019. Favorite Films: Taxi Driver, Fight Club, I Saw the Devil, The Wild Bunch, Dawn of the Dead, A Clockwork Orange, Pulp Fiction, Heathers, The Monster Squad, and High Fidelity.
The Midnight Man The Taviani Brothers Collection (Blu-ray)