Posted in: No Huddle by Brent Lorentson on March 7th, 2016 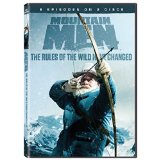 Despite how the History Channel continues to churn out more reality shows, the upside of this is that the shows they put out happen to be pretty entertaining.  When I first heard about Mountain Men, the first thing that came to mind was how dangerous was this show really going to get?  Sure, you can have people hunting in the snow, but would the producers of the show really allow their crew to sit back and record the “cast” as they continue to face dangerous and deadly situations over and over?  Well, the answer is yes, and the danger comes in various forms as the men of the show face off against Mother Nature in a blistering struggle for survival.

For those who may not be familiar with the show, it’s a pretty simple setup.  A film crew basically follows these “mountain men” as they struggle to survive in live off the land in the wildernesses of Alaska, Montana, North Carolina and New Mexico.  These are not guys who just live in a simple cabin in the middle of the woods; instead, these are the rare breed of man who survive on the food that they hunt and the pelts of fur that they can sell.  For those of you animal lovers, this may not be the show for you, since the hunting and skinning of the animals is a pretty common occurrence here, and the camera doesn’t look away.  If you can stomach some of these graphic images, the reward is some well-crafted storytelling of survival as well as some beautiful cinematography.

In the opening episode “Adapt or Die”, we catch up with the assorted members of the cast as they prepare to set off on their various occupations as the winter quickly approaches.  Morgan has a plot of land he has recently purchased and plans to trek through the Alaskan landscape to reach his property.  This storyline alone is worth giving this series a shot, because, well, if you want television that keeps you guessing whether or not the character will survive, this doesn’t disappoint, between him falling through ice and trekking through mountainous terrain where an avalanche can occur at any moment, while facing below zero-degree temperatures.  And that’s just following one character.

Over the course of the show, we also see Marty, who is a trapper in Alaska who is singlehandedly building a cabin for his family while he is trapping animals.  There is also Tom, who is an experienced trapper who starts off the season having struggles with a bear that is stalking on his property and over the course of the season struggles with his traps.  Rich is an experienced tracker who works with his dogs and is on the trail of a mountain lion or possibly a pack of wolves that is killing off neighboring rancher’s goats, and his story takes an unexpected turn.

As these men face off against rattlesnakes, bears, and everything else Mother Nature throws at them, they manage to persevere, and it’s rather inspiring considering most characters we see in reality shows are vain characters we aspire to be nothing like.  In a time when the networks are aiming to shock us with sex and morally corrupt personalities, History Channel dares to be different and delivers some quality reality television the whole family can enjoy.

My only major complaint with this release is that it’s not a full season; we only get half the season, and it leaves the viewer hanging.  It’s a good way to get viewers to want to tune in to see what happens next, but those who may not have noticed that there are only eight episodes on this release may be a little disappointed.  The quality of the release is well worth taking a chance on the show and checking it out; just know that it does leave you hanging.

Brent Lorentson is a horror writer and film critic based out of Tampa, Florida. With a BA in Digital Film, he co-wrote and co-directed Scavenger Hunt. His short stories have appeared in various horror anthologies. In 2019 his short script Fertile Blood will be a part of the anthology horror film Slumber Party. He is currently working on his first novel A Dark and Secret Place set to be released in late 2019. Favorite Films: Taxi Driver, Fight Club, I Saw the Devil, The Wild Bunch, Dawn of the Dead, A Clockwork Orange, Pulp Fiction, Heathers, The Monster Squad, and High Fidelity.
Strike Back : The Complete Fourth Season (Blu-ray) Hogan’s Heroes: The Complete Series