Posted in: Disc Reviews by Jeremy Butler on March 9th, 2016 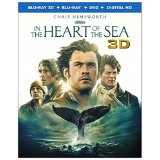 “It will be a work of fiction, inspired by truth.”

That one line best summarizes the entire movie, in my opinion. In In The Heart of the Sea, we are treated to the insight of how Herman Melville was inspired to write what may be considered one of American literature’s biggest epics, Moby Dick. As this is a film based on a true story, naturally we recognize that certain liberties were taken with the specific goal of maintaining the audience’s attention; however, as you watch, I am confident that you will find yourself wanting to believe in the legitimacy of the tale. I know I did.

Herman Melville (Ben Whishaw, Spectre) travels to meet with Thomas Nickerson (played by Brendan Gleeson, and Tom Holland in flashbacks) in order to persuade him to give his first person account of the demise of the whaling ship the Essex, as for years there have been rumors and speculation of what truly brought down the vessel that the official story claims ran aground. Melville’s purpose in this pursuit is so that he will be able to write a book based on the account. Reluctant to speak of his time on the ship, Nickerson eventually relents, mainly at the insistence of his wife to tell the tale.

Intertwined with flashbacks, Nickerson recounts his experience on the Essex and the tense relationship between the ship’s captain George Pollard Jr. (Benjamin Walker, Abraham Lincoln: Vampire Hunter) and first mate Owen Chase (Chris Hemsworth, Avengers). Chase, a seasoned officer expecting to be given his first command on a whaling vessel, is forced to accept a position as first mate for new captain Pollard, who has no experience. From early on, both make their disdain for one another well known; however, their circumstances force them to tolerate one another. As time goes by and whale sightings grow scarce, the crew takes time on land where they hear tales from another ship’s captain of an area 1000 leagues along the equator with more whales then they could imagine.

Salivating at the idea of being rid of one another, the crew sets sail for the mother lode and completely disregards the other captain’s warning about a demon whale, bigger than any other and pale white (sound familiar)? Their quest has dire consequences for the crew that will be forced to commit desperate acts in order to survive.

Based on the last sentence, I’m sure you can imagine the types of things that the crew was forced to do in the name of survival. When it comes to that reveal, I essentially saw it coming; however, when the moment was upon me, it still slightly took me by surprise. I believe it had more to do with the way Hemsworth worded the idea. I won’t give away the specifics of how he worded it, because I want it to have the same effect on you as it did for me. Moving on, it has been a few years since reading Moby Dick, so many of the details escaped my memory, and this story was good refresher course, granted that this film is based on the original novel that eventually inspired the Melville epic. That aside, the movie held my attention throughout its runtime, which in my opinion makes it a success.

The cast fit their parts well, and there was connection between Walker and Hemsworth. Their antagonistic relationship is what drives most of the plot. The focal point as it should be is more of the human element between the crew that find themselves in dire circumstances. When it comes to individual performances, they were not as noteworthy as the ensemble. The interactions with other characters is what elevated a person’s performance rather than monologues. One situation comes to mind of emotional chemistry: the conversation between Melville and the elder Nickerson after the big reveal. The weight being lifted was almost palpable.

In Heart Of The Sea is presented in its original aspect ratio of 1.85:1. The 1080p 3D image is arrived at with an MVC codec at an average 25/11 mbps. The film is an obvious conversion, so the 3D isn’t going to be quite as spectacular, but what really makes the visual experience so amazing is the wonderful cinematography and rather nice image with a wonderful grain going for it. Some of the underwater footage takes the whole murky thing a little too far, and there isn’t a ton of detail there. It can be quite a blur. The rest of the film is beautiful in every sense of the word. Sharpness and detail abound here. The haggard survivors in close-up are startling and compelling. Black levels are better than average, except the underwater stuff. It’s the rousing sailing footage that really jumps out in color and detail.

The Dolby Atmos converts to a 7.1 track if you do not have Atmos decoding. While not particularly aggressive, the surround mix is quite immersive. Sometimes it’s the gentle creak of the ship’s planks. Others it’s the twisting of ropes. More often it’s the enveloping crash of the water from both whales and ships. Dialog cuts just enough to make it both realistic and yet clear. The subs come alive as the whale rumbles through the water. The score is quite moving and never gets in the way of the experience.

Ron Howard’s Captain’s Log: (15:47) There are 10 parts that are little more than a minute each. The framework revolves around Howard’s tweets during production. There’s a bit of behind-the-scenes footage and a lot of input from Howard himself.

Chase & Pollard – A Man Of Means And A Man Of Courage: (7:28) The profile of the two characters benefits more from input from the two actors than the clips or other talking heads.

The Hard Life Of A Whaler: (8:49) Cast and crew talk about the tough life of the whalers. The feature also covers a whalers’ camp the actors went through to be convincing sailors.

Whale Tales – Melville’s Untold Story: (9:13) It’s disappointing that cast and crew found reading the book a drudge when they were young. Sure, there is some dryness in the whaler primer aspects, but it’s quite an adventure for anyone who gives it half a chance. The feature talks about his experience as a whaler and his investigation of the Essex story. Participants include Nathanial Philbrick, the writer of the book which inspired the film.

Commanding The Heart Of The Sea: (10:25) This feature really gives us a look at the CGI work and the practical effects in the studio tank. You’ll get to see the various layers leading to the final presentation. There’s a lot more behind-the-scenes footage here.

Lightning Strikes Twice – The Real-Life Sequel To Moby Dick: (28:58) In 2008 portions of a wreck were discovered north of Hawaii. It was the Two Brothers. It wrecked in 1823 and was Pollard’s second command. It would also be his last. I like how the feature moves between the modern wreck exploration and vintage footage and stills from the whaling days. It’s a rather nice contrast.

Deleted Scenes: (36:02) There is a whopping total of 16 with a necessary play-all. While there’s another section of “Expanded Scenes”, that’s really what these are, for the most part.

Island Montage: (3:05) A collection of clips set to score music.

I do not anticipate the film being a commercial success; however, I will speculate that it is likely to be a critical success, especially given that it already has my stamp of approval. History buffs and the acolytes of Hemsworth are likely to purchase a ticket, and many may attend simply to get a look at the acting range of the new Spiderman (Tom Holland, for those of you who didn’t already know). However, there will likely be many who ignore the film due to its historical reference, and to those I say, it’s your loss. I would urge those having doubts to give the film a chance and venture out of their comfort zone, as this is a worthwhile experience in my opinion.

Jeremy Butler is a film school graduate of the International Academy of Design and Technology. He is been writing for Upcomingdiscs since 2012; however, movies have played a big part of his life for much longer. Favorite genres include horror, science fiction/fantasy, and comedy. Favorite movies are V for Vendetta, Boondocks Saints, Kiss Kiss Bang Bang, and The Godfather.
The Americans: The Complete Third Season Life