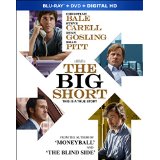 The Big Short is presented in an aspect ratio of 2.40:1. The 1080p image is arrived at with an AVC MPEG-4 codec at an average of 28 mbps. McKay insisted on shooting The Big Short on film, and that decision pays immediate dividends. The movie opens with a brief sequence set in the late ’70s that features subtle grain and some delightfully groovy textures. Once the action fast forwards to the late 2000s, the image becomes noticeably less hazy, but retains the pleasing amount of grain to go with the warm tones. Detail is strong, even if it’s not as razor sharp as most modern HD presentations. The good news is that slight disparity works perfectly for The Big Short, since it takes place in the near past. This title may not overtly strike anyone as a visual feast, but Paramount nevertheless delivers a terrific presentation.

The DTS-X track defaults to a DTS-HD Master Audio 7.1 presentation, which is what I’ll be reviewing. Even that might seem like overkill for what is essentially a dialogue-driven film about a dry subject matter. However, the potent track is a good match for the uncommonly lively approach to the material. Musical cues — like Burry blasting Metallica’s “Master of Puppets” in his office — explode from the surround sound field in dynamic, interesting ways. (We hear it at various levels as we cut from inside his office to how his colleagues hear the music from the outside.) There are also nicely immersive sequences in casinos, busy bars, and when Baum is walking through the streets yelling into his phone or addressing a packed room during a seminar. Of course, the majority of this sonic presentation *is* driven by dialogue, which is always clear and balanced expertly with all the other elements.

In the Trenches — Casting: (15:51) The actors discuss the challenge of playing real-life people from the recent past. That includes resisting the urge to do impersonations in favor of capturing the characters’ attitudes. Bale and Carell, in particular, receive praise for their extraordinarily high work ethics.

The Big Leap — Adam McKay: (11:31) This featurette covers how “the guy who did Step Brothers” ended up directing an Oscar-winning film about the housing market collapse. It’s actually a better fit than you’d think, since the filmmaker’s comedic, improvisational style lightened the heavy load of the unwieldy material. (It also helps that McKay was passionate about Lewis’ book, and this was a passion project for him.)

Unlikely Heroes — The Characters of The Big Short: (11:28) This featurette focuses on the three main plotlines — Michael Burry, Mark Baum, and Charlie Geller/Jamie Shipley — and how The Big Short is framed as a story about outsiders.

The House of Cards — The Rise of the Fall: (14:01) Probably the most useful special feature in the bunch, this charts the early-to-mid-2000s time period leading up to the events depicted in the film.

Getting Real — Recreating an Era: (11:13) An interesting mini-doc examining some of the filmmaking techniques in The Big Short. McKay sought a verité, documentary feel for the scenes with heavy dialogue in order to reinforce the notion that this stuff really happened. Editor Hank Corwin (whose work includes Natural Born Killers) talks about incorporating dizzying, kinetic transitions to keep the film moving (and the audience from getting bored).

Deleted Scenes: (6:28) There are only five scenes, and they don’t run very long, but we actually get some interesting material here. We get a fourth wall-breaking moment from the real Danny Moses (played by Rafe Spall in the film) that falls flat and was best left on the cutting room floor. There’s also an extended peek at how Asperger’s affects Burry’s home life.

In the end, I have to commend the filmmakers for pulling off an extremely difficult task — making the financial collapse funny, accessible, and fascinating — with aplomb. The film was nominated for five Academy Awards, including Best Picture. (McKay and Charles Randolph won an Oscar for adapting Lewis’ book.) More importantly, The Big Short has a chance to become the definitive film about one of the gloomiest chapters in recent history.