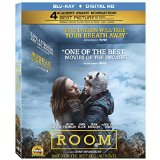 “When I was small, I only knew small things. But now I’m five, I know everything!”

Room opens on the day that Jack, the movie’s relentlessly curious young protagonist, turns five. Jack is our entry point and guide through this story, but there’s at least one important thing he doesn’t know. In Room, we see how a mother and her son cope with one of the most harrowing circumstances imaginable. It should make for a grim experience, but this wonderfully-crafted film winds up being a moving story about resilience and how parents and their children can draw strength from one another.

“Once upon a time, before I came, you cried and cried and watched TV all day, until you were a zombie. But then I zoomed down from heaven, through skylight, into Room. Whoosh-pshew! And I was kicking you from the inside. Boom, boom! And then I shot out onto Rug with my eyes wide open, and you cutted the cord and said, ‘Hello, Jack!’”

Jack (Jacob Tremblay) is our narrator and we hear these words at the start of the movie. His POV is also the dominant one in the novel this film is based on. (“Room” author Emma Donoghue adapted her own book for the screen.) The movie expands on the novel’s narrower viewpoint, and it doesn’t take long to decode Jack’s rosy, fantastical description of his life with Ma (Brie Larson).

In real-world terms, Ma is a young woman who was kidnapped seven years earlier and placed inside the grungy storage shed known as “Room.” She calls it that for the benefit of Jack, the boy who was born as a result of repeated sexual assaults from her captor. The kidnapper is known only Old Nick (Sean Bridgers), and we routinely see him enter Room while Jack watches from inside the closet Wardrobe.

“Are you tricking me?”

The film’s first 45 minutes are masterful as they simultaneously address some potentially-nagging questions — hasn’t Ma tried to escape? — and establish Ma and Jack’s world, which (for all Jack knows) is contained entirely inside Room. As a result, practically every item — Toilet, Rug, Lamp, Egg Snake (don’t ask) — becomes Jack’s friend. It’s obviously a fiction perpetuated and encouraged by Ma as a way shielding Jack from the horror of their everyday life, not unlike the concentration camp games Guido devises for his son in Life is Beautiful. (Room also prominently name-checks Alexandre Dumas’ “The Count of Monte Cristo” and Lewis Carroll’s “Alice’s Adventures in Wonderland.”) When a quietly fortuitous turn of events gives Ma hope that they can escape, she gradually reveals to Jack there’s whole wide world outside of Room worth living for.

Director Lenny Abrahamson and Donoghue — both Oscar nominees for their work here — had to sidestep some very tricky territory. In presenting a story about years of imprisonment and sexual abuse from a child’s perspective, they risked cheapening and infantilizing the undeniable awfulness of Ma and Jack’s ordeal. Room balances realistic touches with subtly fantastical flourishes by emphasizing the idea that the latter come from a place that is genuine and earned: a mother’s obsession with protecting her son from anything that could hurt him (physically or psychologically). There also appear to be filmmaking tricks that make Room appear much larger in the first half of the film than it does by the end. On top of that, Abrahamson has crafted one of the tensest sequences I’ve seen in the last year, as Jack attempts to enact Ma’s escape plan.

Of course, this movie could never work if the two leads weren’t spot on. Larson — who has quietly amassed an impressive resume over the last half-decade — won the Best Actress Oscar for her stellar performance as Ma. The brilliance in her work goes beyond “actorly” sacrifices like not wearing makeup; her face is alternately exhausted and resigned due to her terrible imprisonment alongside Jack. She is able to convey both tremendous strength and the idea that Ma is barely keeping herself together. (Especially in the second half.) As great as Larson is, it was probably even tougher to nail the casting of Jack. Tremblay also deserved an Oscar nomination for his tentative, openhearted work. (He was campaigned — and failed to make the cut — in the Supporting Actor field, which is a farce; Jack is the lead character and practically in every scene.) He also ultimately proves to be an indispensable (and convincing) source of strength for Ma.

Room inevitably loses a bit of steam in its second half, which nevertheless features fine understated work from Oscar nominees Joan Allen and William H. Macy, along with Canadian actor Tom McCamus. (The one glaringly false note involves an appalling TV interview toward the end.) However, even the latter portion of the film offers a sense of discovery. The phrase “childlike wonder” is probably a cliche at this point, but Tremblay gives it new life as Jack starts to learn more about the world.

Room is presented in an aspect ratio of 2.40:1. The 1080p image is arrived at with an AVC MPEG-4 codec at an average of 36 mbps. While medium shots tend to go slightly soft — probably due to Room’s low-lighting conditions — there is fantastic fine detail on every key prop, including “Meltedy Spoon” and “Egg Snake.” The film is dominated by a drab, desaturated palette that still manages to feel oddly warm. Once Jack and Ma’s world begins to expand, we briefly get some intentionally harsh, high-contrast images before the visual presentation settles back into its grayish groove. Like the story itself, this visual presentation from Lionsgate finds beauty and wonder in shabbiness.

The DTS-HD Master Audio 5.1 track is dialogue-driven, to be sure, but incorporates a few dynamic sonic elements. Stephen Rennicks’ tender, lilting score helps fill the space in the surround sound field during the film’s isolating first half. The rear speakers also consistently give off a low, industrial hum, which represents Room’s power source. (Depressingly, it’s also the only audible noise outside the four walls.) In contrast, the beginning of the film’s latter half feels like an overwhelming explosion of sounds, and we’re properly assaulted from all speaker channels. Otherwise, this is an effectively low-key presentation.

Audio Commentary with director Lenny Abrahamson, cinematographer Danny Cohen, editor Nathan Nugent, and production designer Ethan Tobman: Having some of the film’s key craftsmen join the director for a chat may not be the sexy choice for a commentary track, but it absolutely pays off. This track is essentially a clinic on visual storytelling.

Topics include using various light sources and obsessing over the props and furniture that would be included inside Room. I know…it sounds like a snoozefest. But it’s actually a great window into how talented filmmakers can protect a story’s realism and integrity while evoking an emotional response. In other words, they talk about the stuff they hope you don’t notice them doing while you’re watch their movie.

Making Room: (12:03) Cast and crew speak glowingly about their strong connection to the material. “Room” author Emma Donoghue, recognizing the story’s cinematic potential early on, reveals that she began working on a Room screenplay before her book was even published. (The screenplay also allowed her to bring more of Ma’s reality to life.) The featurette also touches on Larson’s preparation for her role, and the search for the right Jack.

11×11: (9:06) Production designer Ethan Tobman takes center stage here (along with Abrahamson) as we get a closer look at the titular set. Tobman shows off its removable wall tiles and talks about drawing inspiration from tiny housing spaces in Hong Kong, among other sources. We also see Donoghue take a quick tour and offer her approval.

Recreating Room: (4:23) Last October, the set was packed up from Toronto and shipped to a gallery space near the Landmark Theatre in West Los Angeles, where filmgoers, press members, and others could check it out for themselves.

Room picked up a quartet of Oscar nominations (Best Picture, Director, Actress, and Adapted Screenplay), with Larson winning a trophy. I’ve now seen this movie twice in the span of a few weeks, and I found that I liked it even more the second time. Not only did I have a better understanding for all the “Jack-speak” (which can be confusing and a little annoying the first time around), but this Blu-ray — particularly the fine commentary track — helped deepened my appreciation for all the care that went into presenting this sensitive story.

This covers a tough subject matter for sure, but I definitely recommend you spend some time in Room.