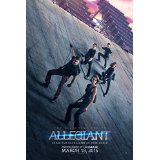 “You want change with no sacrifice. You want peace with no struggle. The world doesn’t work that way.”

Now that Hunger Games has vacated the crown previously occupied by Twilight, the Divergent series appears to be the only game left in the teen drama genre. Ironically, this series is rounding its final corner with the release of Allegiant, part one of the two-part conclusion to the novel franchise written by Veronica Roth and made popular through Shailene Woodley, Theo James, and Miles Teller. The list goes on; however, for the sake of time, we will leave it at that. This time around the heroes find themselves literally in unfamiliar territory, as they discover that the world they knew is larger than they ever imagined.

At the conclusion of Insurgent (the second film in the series) Tris (Woodley) and Four (James) are narrowly saved from the hands of Jeanine by a raid conducted by the Factionless, namely Four’s mother Evelyn, who seizes control of the city. Shortly before the siege, the message contained within the mysterious box and subsequently released by Tris revealed to the people of Chicago that the world they knew was an experiment, a method of attempting to purge man of the violence that very nearly destroyed the world. Divergence, specifically Tris’ divergence, was meant to signify that Chicago has reached the point that it is ready to rejoin the rest of the world (ironic given the near-genocide that was taking place in the city).

The story picks up after the siege; Evelyn’s first act as Chicago’s leader was to seal the gate to the city. Claiming that the people who left the message pose an unknown threat, she forbids the leaving of the city. Inside the city, she conducts trials for Jeanine’s co-conspirators, with many of their fates appearing to be predetermined, including Tris’s brother Caleb (Ansel Eglort). Unable to watch the people continue to make the same mistakes and determined to know what is beyond the wall, Tris, along with Four, Christina, Tori, and Peter, make a daring escape attempt to flee the city.

Their escape is successful but not without casualties, and before long many of them begin to question if leaving was the right thing after being confronted by the aftermath of the global war. Nearly losing hope, the group is rescued by representative with the Bureau of Genetic Affairs and taken to their haven. They are given food and shelter and begin to assimilate into this new society. Tris embraces this new life quickly, especially after meeting the BGA director, David, who reveals that through her, they can save world. Four maintains reservations about this new life, creating tension between the two.

Meanwhile, back in Chicago, Evelyn finds herself on the brink of civil war once again as a new group rises up to oppose her leadership and the lockdown of the city. Learning of the turmoil back home, the group finds themselves divided on returning to Chicago or continuing their new lives, a decision which will have lasting effects on all parties involved.

“If something sounds too good to be true….”

That is the moral of this tale in my opinion and the lesson that drives most of the story. Allegiant keeps of the momentum of the franchise going, recapturing my interest in the series, which was diminished slightly during the second film. This time around, I experience more intrigue with the relationship between Tris and Four as conflict was introduced into their union. I feel Four asserted himself more and reclaimed some one of the independence he possessed in the first film and lacked during the second. The rift between the love interest helps illuminate some obvious pitfalls in their relationship but also helps create a dynamic for growth needed for the success of the coupling. Of course the dynamic would be nothing if it were not for the chemistry between actors Shailene Woodley and Theo James. A chemistry that was evident from the beginning was intensified this time around given the obstacles that had to be overcome.

Chemistry is something that Woodley appears to have with much of the cast, especially Elgort and Teller. Not surprising given that the two have starred as romantic counterparts of the actress in previous films (Elgort in The Fault in Our Stars, and Teller in The Spectacular Now). Despite their history, I must admit to preferring her pairing with James. When it comes to individual performances, a few people stand out; however, the one who springs to mind most is Teller as Peter. As the film’s comic relief guy, he is more than up to the task providing quips that lighten even the tensest situations. The other candidates are the obvious choices of James and Woodley, who have already established their abilities from early on. Elgort had obstacles of his own to overcome given the circumstance his character finds himself in at the beginning and his attempts at redemption and rebuilding his relationship with Woodley’s character.

When it comes to book adaptation, the most important question is always: does it stay true to the source material? Fortunately, I am familiar with the source material, so I am in a position to ask that question. It does not follow the book to the tee, which is to be expected, but it does stay true to the heart of the material in my opinion. There are subtle changes in regard to where certain actions take place and alterations to the backstory of certain supporting characters; nevertheless, I am of the opinion that fans of the books will be more than satisfied with this addition to the franchise, as the qualities that make it engaging are present in the movie. The major draw for me is the action, and Allegiant has plenty of it, usually involving Four. The hand-to-hand choreography is some of the best that I have seen this year, exemplifying realistic struggles without convoluted wirework.

Jeremy Butler is a film school graduate of the International Academy of Design and Technology. He is been writing for Upcomingdiscs since 2012; however, movies have played a big part of his life for much longer. Favorite genres include horror, science fiction/fantasy, and comedy. Favorite movies are V for Vendetta, Boondocks Saints, Kiss Kiss Bang Bang, and The Godfather.
Room (Blu-ray) Drunk History: Season 3