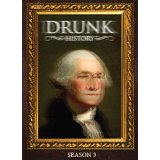 In the last few years, I’ve begun to question the veracity of any of the history I’ve been taught. I’ve been finding big chunks of history that were never included in the textbooks, and it seemed to depend on the point of view of the teller what kind of history you got. The old saying is, “History belongs to the victors”. It’s that sort of thing. Now you can add Drunk History to the mix. This is where people talk about historical event, but only after they have become hopelessly debilitated by alcohol. It’s funny to watch, and, in this case, you already know for sure history is becoming garbled. I’ve already reviewed the Season One and Two sets, in case you want to go back and reread that. They really are very funny, but you wonder, first of all, how much these various comedians really know about history. Then they get drunk, so often they wind up just falling on the floor and sleeping and babbling. But on some level, I get more out of these historical retellings than the dry and serious ones. At least with Drunk History I am forced to think for myself, and if I really want to know, I should research it myself.

All in all, it’s a good way to get your kids interested in history. And you can show them how stupid and pathetic a whole lot of drunk people look.