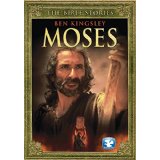 I recently reviewed a cinematic production of a different bible story, Noah’s Ark, and I commented on the fact that I have heard that particular story told time and time again since childhood. Now I have been given the opportunity to review another bible story adapted for screen: the story of Moses. I thought that I had heard the story of Noah a lot, but then I began thinking about how many times I have heard the story of Moses. Whether be it through different adaptations of films or the original tale in the Bible, I believe I have experienced a retelling of the tale of Moses more than any other tale from the good book. Fellow cinephiles might recognize a few of these titles: Cecil B. DeMille’s The Ten Commandments (both his 1923 and 1956 versions), the animated feature The Prince of Egypt, or perhaps the more recent Ridley Scott feature, Exodus: Gods and Kings. The one thing that each of these films has in common is the aforementioned source material.

This specific adaptation, titled Moses, places Ben Kingsley in the lead role. It was his presence that drew me to the film in the first place. However, I was quite surprised to see two other veteran actors, Christopher Lee and Frank Langella (occupying the roles of Ramses and Memefta respectively).  It was a little bizarre that these three actors were the only ones that I actually recognized in the production. Every other actor I had never seen before, creating a strange stage on which Kingsley performs. This strange stage is made even more bizarre with the fact that Lee and Langella are actually minor characters in the film: Although the pharaoh and his heir are the main antagonists in the actual story, the amount of screen time they occupy is incredibly insignificant. As a result, Kingsley’s performance as Moses becomes enunciated, which left him little room for error in my expectations regarding his acting. I must say he definitely delivered on all fronts, but I don’t think I’d prefer him to Charlton Heston in 1956’s The Ten Commandments.

As a matter of fact, I don’t think I enjoyed this adaptation as much as I enjoyed The Ten Commandments. Because they are both excruciatingly long epics (Moses clocks in at about three hours and Commandments ends after three hours and forty minutes), they really need to offer a multitude of elements to keep me engaged for the entire film. Moses has Ben Kingsley acting, which is absolutely fantastic. However, it would not be enough to win my attention through the entire film. On the other hand, The Ten Commandments had Charlton Heston, yes, but it also had the impressive practical effects created on Hollywood sets and physical editing techniques, which will always impress me, even if they do look silly at times. The effects in Moses are CG, something I am never a fan of. It was also filmed on location in Italy, which looked fantastic, but the cinematic techniques were not anything special. As cheesy as the older Hollywood special effects look, I appreciate the tremendous effort that was put into making them look magical.

Also, I believe that it is worth noting that this title is a redistribution of a made-for-TV film that was made in 1995. That is not a bad thing, but I thought I would be watching a more recent production, rather than a production I probably had plenty of opportunity to see prior to this most recent distribution. It is part of a series entitled The Bible Collection being distributed by Shout Factory. If you are interested in collecting cinematic biblical epics, I’m sure the other films in this set will be similar in the production of Moses, so I imagine it would be a nice set to own if you enjoy seasoned actors taking on the roles of famous biblical characters. However, if this film were to stand on its own as just an adaptation of the Moses tale, it would rank fourth in the list of the six that I have actually seen, simply because the acting and drama are just not enough to hold me for three hours.