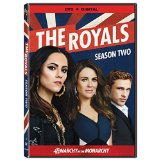 In season 1, The Royals showed us that depravity and royalty went hand in hand. This time around, it’s all about anarchy in the monarchy. When we last looked in on the ruling family of Britain, King Simon was assassinated, and within seconds of his death, his opportunistic brother literally pried the royal seal off his fingers. I mean, his body wasn’t even cold yet, and there is Cyrus grave-robbing.  Liam had the opportunity to walk away from the all the pressures of being the heir apparent and be with the girl of his dreams, but chose duty and familial obligations (yeah, because that always ends well). Helena’s reputation was in ruins; however, there was light at the end of the tunnel after a powerful interview. Finally, Eleanor discovered that her older brother, like her father, was assassinated. Needless to say, their entire world turned upside down. I was excited to see what came next.

Season 2 picks up not long after the events of last season. Following the death of King Simon, Cyrus has ascended to the throne, mostly due to his manipulations of having the rightful heirs, Liam and Elizabeth, declared illegitimate. Unlike his brother before him, Cyrus is not fully embraced by the people and finds himself forced to buy their affections. In a move to secure their loyalty, King Cyrus restores the twins’ titles. Unbeknownst to him, the pair intends to use their positions to further their investigation and expose the conspiracy that is responsible for the death of their father as well as their older brother before him. Meanwhile, Queen Helena, reborn from the scandal of her infidelity, sets in motion her own plans to seize the throne right from under her brother-in-law and former partner in crime. Her ambitions are not without obstacles in the form of the prime minister and her mother.

The main draw for the season is the conspiracy, which is handled quite well in my opinion. While watching, I couldn’t help but get all nostalgic about One Tree Hill (as the creator of this series is also responsible for the former) and the unique way that Mark Schwahn manages to maintain the surprise of the whodunit much in the way he did with his former series. I’m not going to ruin the mystery for the audience, but I will admit that of all the people who could have committed the crime, the responsible party was not in my top five. The fallout of the reveal is likely to have ripple effects on the coming season.

Two pertinent questions for any returning series are always how does this season compared to the last, and did the series lose any of the momentum established in the first season? In reference to the first question, matters are beginning to play out on a larger scale as the audience gains much more perspective into the mystery. Last season, the conspiracy was a footnote in the end of the season. A teaser to ensure an encore. This year, it has a name, “Domino.” As far as the second questions goes, the answer is yes and no. On the one hand, I do not feel like there was much character development with Princess Eleanor. I expected that the knowledge of what happened to her loved ones would have a humbling effect and make her a stronger and more central character. However, she only manages to dive deeper into debauchery. This season did introduce another love interest to spread the gap between her and Jasper; however, it is an obvious ploy, and we all know what’s going to happen. Now, on the other hand, I feel like we got to see a darker side to Liam, who showed unwavering determination to find those responsible for his family’s loss, even going as far as to form an alliance with his sister’s former paramour.

In the end, much like last season, the final two episodes turn out to be the most significant of the season, solving the mystery of who killed King Simon. Believe me, it is a doozy. Not to mention the continuing power struggle between Cyrus and Helena. At this time, there is no indication whether the series was renewed for another season. However, the way the season 2 ends, I don’t expect the renewal announcement to be far behind.

Jeremy Butler is a film school graduate of the International Academy of Design and Technology. He is been writing for Upcomingdiscs since 2012; however, movies have played a big part of his life for much longer. Favorite genres include horror, science fiction/fantasy, and comedy. Favorite movies are V for Vendetta, Boondocks Saints, Kiss Kiss Bang Bang, and The Godfather.
Exclusive Interview With Tanna Frederick Exposed (Blu-ray)