Posted in: Disc Reviews by Brent Lorentson on April 3rd, 2016 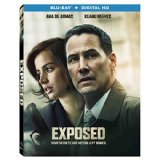 Keanu Reeves is a guy who I don’t think anyone would be crazy enough to say is a “great actor”, but instead he’s a guy who has been in some pretty great films.  For me he’s an actor I grew up with from his days doing the Bill and Ted movies and Point Break. (Seriously, how dare they attempt to remake that gem?)  Between Speed and The Matrix, those are the two movies I’ve held onto for so long as his career took a more interesting turn; that is until John Wick came along and blew my mind with all the insane coolness that was up on the screen.  Finally it seemed I was on track to getting the Keanu Reeves that I grew up watching.  I know, so what’s the point of all this?  Well, until now, none of the Reeves films that I’ve liked could I really say it was because of his performance, and Exposed is finally the film he’s needed where he can show he’s more than just a brooding action star.

Isabel (Ana De Armas) is a young woman who has done everything she can to be a good person.  She’s filled with love and devotion to her husband and family, and when it comes to her job, working with children, there is no better-suited person to be tasked with watching your kid.  Basically Isabel is as close to perfect a person can get through the eyes of her faith.  When we see her walking alone late at night through a subway station, you just know this can’t possibly end well for her, though what follows is a bit of a head-turner as she encounters a strange albino man in a suit who has the ability to float above the tracks.  Is it an angel that has come to her, or is there something more sinister at play?  This is something that isn’t answered until things seem to get even stranger for her.

Running parallel to Isabel’s story is the investigation into the murder of Detective Galban’s partner.  Galban (Keanu Reeves) is a loner, and he’s taken the loss of his partner even harder considering this was his only friend on the police force.  Reeves plays up the somber perfectly here and puts on a show as we see Galban go through the wringer dealing with grief.  Making matters worse for Galban, as his investigation goes on he of course discovers that his partner isn’t the guy he believed he was.

While this is going on, we also have some gang members dealing with strife amongst one another.  Though this storyline is somewhat crucial to tying Isabel and Galban together, it’s something that the film could have done without, as it seemed like a halfhearted attempt to give the film a gritty feel.

As Galban seems to be slipping mentally, he begins to have a fling with his dead partner’s wife, played by Mira Sorvino.  This is a character shift I somewhat had a problem with, but I get it, this is supposed to be about people making bad decisions and having secrets.  This just seemed a bit much considering the guilt we’re already seeing Galban carrying.

The biggest leap the film takes revolves around Isabel discovering she is pregnant.  This takes a toll on her family, since they believe she has cheated on her husband while he’s been overseas, BUT Isabel claims she has been impregnated by God.  Then mix in how Isabel attempts to rescue a young child who is being abused; as you can imagine, there is a lot of drama going on here.

It’s the amount of drama going on that has me feeling that there really are two separate movies going on here.  The separation of the storylines is very divided as well, as the Isabel portion is shot with a warmer amber filter, while Galban has a very cold bluish tint throughout.  There’s enough story for each to be their own feature, and their themes in some respects may be similar, but the execution is drastically different, to the point when the stories to come together it’s just not a satisfying explanation.

Exposed is presented in a 2.40:1 aspect ratio.  The 1080p image is arrived at with an AVC MPEG-4 codec at an average of 36 mbps.  This is a good-looking film; when it comes to the Isabel portions things have a warm fantasy look to them, while the Galban portions have a cold feel.  Galban’s portions seem to be in a more realistic setting, though there seems to be a lot of color removed, and the story lingers more in the nighttime.  We have some nice detail in the darker portions, and there were no compression issues that I could see.

The DTS-HD Master Audio 5.1 track is a bit lackluster; in the one club sequence at the start of the film it was painfully obvious this was simply a music bed that was laid over top of the scene.  Though the dialog throughout the film is clear, there is nothing really notable here.  Even a particular scene where we have gunshots is unremarkable.

The Making of Exposed: (12:08) There isn’t much here but a group of interviews thrown together with the cast discussing what brought them to the project and them discussing their characters.

Extended Interviews:  In case the making-of didn’t fill your desire to hear about the film, here we get extended interviews where the cast pretty much says the same thing.

While I liked the movie and it had some nice storytelling points, as it attempts to wrap the story up the film seems to become a mess and just left me disappointed.  If you’re looking for a drama to watch on Netflix when there is nothing else to watch, the performances from Reeves and Ana De Armas are worth giving the film a shot.

Brent Lorentson is a horror writer and film critic based out of Tampa, Florida. With a BA in Digital Film, he co-wrote and co-directed Scavenger Hunt. His short stories have appeared in various horror anthologies. In 2019 his short script Fertile Blood will be a part of the anthology horror film Slumber Party. He is currently working on his first novel A Dark and Secret Place set to be released in late 2019. Favorite Films: Taxi Driver, Fight Club, I Saw the Devil, The Wild Bunch, Dawn of the Dead, A Clockwork Orange, Pulp Fiction, Heathers, The Monster Squad, and High Fidelity.
The Royals: Season 2 Forsaken (Blu-ray)