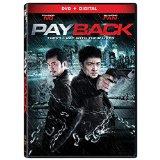 After screening Payback, I did a decent amount of research to find information about the director in an effort to better understand the film from a production standpoint. After searching on the web for a bit, I discovered that there is really not much information about the film outside the fact that it is a Hong Kong production, written and directed by first timer Fu Xi. This is a bit strange, considering the fame of the lead actors Francis Ng and Fan Siu-Wong. Anyone who has a mild interest in the action cinema of Hong Kong would recognize Fan Siu-Wong from Ip Man, Ip Man 2, or my personal favorite, the gore-filled Riki-Oh: The Story of Ricky.

Francis Ng plays a lowly, disheveled cab driver (very well, I might add) who picks up a newly released prisoner, Zhang Jin (played by Fan). In typical action-thriller fashion, Zhang Jin becomes the target of an assassination plot to tie up loose ends, and he finds an unlikely ally in the cab driver. Although I’m much more familiar with Fan Siu-Wong’s performances, Francis Ng’s acting in this film is absolutely fantastic. Distraught with the recent murders of his wife and daughter, watching him spiral into insanity both emotionally and physically was quite an enjoyable ride. As a matter of fact, the picture on the DVD sleeve which depicts Ng holding a gun is rather misleading. Throughout the film, Ng’s acts recklessly out of grief, but is believably clumsy in his mannerisms: He is an outraged civilian who happens upon a gun, who takes matters into his own hands without knowing anything about firearms or the repercussions of revenge. I believe this, ultimately, is Payback’s saving grace.

I cannot bring myself to rate this film any higher than a 2.5 because the sequencing of the storytelling is very sloppy and detrimental to the film. The film is told through an unnecessarily nonlinear plot that confused me far more than it should have. The problem that I see stems mostly from the fact that we have two different protagonists with two different stories. Although their stories do indeed intertwine, the information to both of those stories is given to us in small flashbacks throughout the film. By the time you get to the end of the film, you finally have all the pieces of the puzzle, but you feel very frustrated, because you now realize the puzzle only had five pieces to begin with. The amount of work that the film asks you to do in putting the puzzle together makes it feel so much longer, and it actually clocks in at under 90 minutes. It is so upsetting for me; I really enjoyed the acting and the story, but the nonlinear execution served no coherent purpose other than to try to defy audience expectations. It is almost as if it were an afterthought.

One other redeeming quality this film offers is the frequent images of the beautiful cityscape, both day and night. This is really nothing unique to the film, as any modern action thriller set in Hong Kong typically takes place in the slums of the city, but there is never a shortage of the wonderful b-roll. Even the scenes that take place in the dark alleys or despondent apartments create an irresistible, yet unnerving charm. The bleak underbelly of society becomes an unexpected beauty of sorts. Which is why it is so unfortunate that the film is so nonlinear; I enjoyed everything except that. Perhaps I could spin it in such away to convince myself that the nonlinear plot contributes to the audience “feeling lost” within the streets of Hong Kong. However, if your mission as a first-time director is to disorient your audience through irregular plot conventions, they may not have the patience to watch your refined innovations as your work progresses.