Posted in: Disc Reviews by Gino Sassani on April 7th, 2016 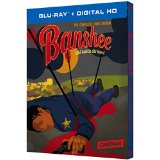 Banshee is one of those improbable plots that finds a way to pull us into the action all the while ignoring how unlikely any of this might really be. Of course, we do that all the time. It’s certainly unlikely we’re going to face a zombie apocalypse or run into a super-powered hero. That’s a different kind of unlikely. This kind of real-world fantastic is usually a bit harder to accept. Credit folks like Allan Ball for keeping us engaged with some of the most entertaining sleight of hand on television. Entering its third season, the series shows no signs of slowing down. You absolutely can’t start with season three. There’s too much “must-know” build up here. You can get caught up on the characters and first two seasons here.

As we begin the third season, the death of tribal chief Alex has left a power vacuum at the Redbone tribe. It’s now being exploited by Clayton Littlestone, played with incredible intensity by Geno Segers. He’s using the tribe’s anger to whip up a frenzy of hatred toward Kai and the white nation in general. He’s planning some serious bloodshed, and it leads to a series of brutally violent encounters, both with Kai and an intense siege of the Banshee sheriff station. This is one of the most violent scenes you’ll see on television. It’ll cost us one of our regular characters as serious loss mounts on both sides. It will also lead to Clayton taking something important away from Hood. The result puts Hood in a distracted and hallucinatory state that will have its climax with Brock and Hood having a showdown with Clayton in New Orleans. Neither of these events are to be missed.

The Rebecca character has more to do this season. She tries to prove her worth and go hardcore. It only ends up causing another war and bloodshed for her uncle. I have to say this is a character I’ve never warmed up to. It appears the writers keep trying to find a direction for her, but she’s used too often as a pretty pose for dramatic effect. I don’t really want to put the blame at the feet of Lili Simmons. It’s an awkward character that I think the writers struggle to write. The same appears to be true for Hood’s daughter Deeva, played by Ryan Shane. This season they are starting to find a direction for her. She’s just found out about her father and starts to act out throughout the season. She’s attracted to bad boys and resorts to drug use and criminal activity. Still, she doesn’t ever really fit into the pace here. Everything is such to-the-wall action that these characters don’t blend in with the show’s pace. It’s not a lack of ability here to create strong female characters. Cassie is certainly a force to be reckoned with here, as was Nola Longshadow, who gets a brutal finale in this season in one of the show’s harshest fights.

The big heist this season involves an army base where Commander Stowe (Kirkwood) has been skimming money from the military appropriations. He’s got millions sitting in a vault, and he’s not going to call the cops if it gets taken. The heist is played out in a found-footage styled episode. Look, there’s been too much of this for it to be remotely clever anymore. The heist is a low point of the season for me. It will lead to one heck of a cliffhanger finale. Stowe isn’t going to call the cops, but he runs a military-trained team that’s not going to let them get away with it either. The finale sets up a new direction for the fourth season, and I’m eager to see where that goes.

If you like action, the series does not disappoint. Lucas has had to train himself while in prison, because Rabbit was always sending guys to hurt him. He’s learned to fight, and his punch (or shoot) first and ask-questions-later reactions are getting him noticed with suspicion by Brock. Let’s just say he isn’t going to be a by-the-book law enforcement officer. Expect a ton of fights and plenty of bloody action. He does get his behind kicked on several episodes. It’s amazing how much this guy can take and heal pretty quickly.

The adrenaline ride is addictive. No matter how unbelievable the show got, I still couldn’t wait to see what happens next. The show attempts to take a comic-book approach to the storytelling, and while this is not based on any established graphic novel, it feels like it is. And, of course, the comics have already begun to follow. If you like stability in your story or characters, this one will not work at all for you; be warned now. If you can go the extra mile in suspension of belief and you don’t mind the relationship instabilities, the show certainly knows how to entertain.

Each episode is presented in its original aspect ratio of 1.78:1. The 1080p image is arrived at with an AVC MPEG-4 codec at an average 35 mbps. The high-definition image presentation is quite cinematic. It’s very hard to judge the actual quality. The filmmakers do a lot of different styles and filming techniques that highly vary things like sharpness, texture, and particularly color. You have to get used to the storytelling here and learn which styles mean what things. Within that framework, I’d say we’re getting exactly what is intended.

You also get select commentary tracks and a couple of deleted scenes.

Inside The Title Sequence: The titles for each episode are different. They use symbols and photos to tell a mini-story, which is in turn connected to the episode. These pieces allow you to access the symbol info during the sequences. Appropriate images will appear with a red ring. When you see the ring, you hit enter on your remote and get the inside scoop.

The Heist: (20:00) This feature allows you to watch the heist from any of the four cameras.

There are a few short stunt features that are episode or scene specific.

Alan Ball got my attention in 2001 with HBO’s black comedy Six Feet Under. It was one of the most original shows I had ever seen, and to this day I find it hard to characterize the series when asked to do so. It was there that he also introduced me to Michael C. Hall, who continues to amaze me in the role of Dexter over at Showtime. When Six Feet Under left the airwaves, Ball didn’t waste very much time in bringing his quirky style back, this time to the horror genre. True Blood would put a rather strange twist on the lovesick vampire craze, and while that show has not kept up the same kind of clever writing and wickedly brilliant stories, Ball has lent his name and talents to another cable show. This time it’s on Cinemax, and the series is Banshee. And while Ball is a producer and not the day-to-day runner of the series, it is nonetheless another pretty strange show that defies any particular genre or characterization. “The story gets better…”

Gino Sassani is a member of the Southeastern Film Critic's Association (SEFCA). He is a film and television critic based in Tampa, Florida. He's also the Senior Editor here at Upcomingdiscs. Gino started reviewing films in the early 1990's as a segment of his local television show Focus. He's an award-winning recording artist for Omega Records. Gino is currently working on his 8th album Merchants & Mercenaries. Gino took over Upcomingdiscs Dec 1, 2008. He works out of a home theater he calls The Reel World. Favorite films: The Godfather, The Godfather Part II, The Body Snatcher (Val Lewton film with Karloff and Lugosi, not the pod people film), Unforgiven, Gladiator, The Lion King, Jaws, Son Of Frankenstein, The Good, The Bad And The Ugly, and Monsters, Inc.
Pay Back Mojave (Blu-ray)