Posted in: No Huddle by Brent Lorentson on April 7th, 2016 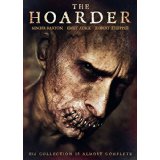 Any time I would catch the show Storage Wars, I always would watch with this morbid curiosity with the hopes that one day they’d open a storage unit and discover something more than a few lost boxes.  With the millions of storage units that are spread throughout the country, you’d have to imagine that hidden away in a couple of these units are some pretty awful things that would turn the stomachs of most.  Is this simply a thought I have from watching too many horror films? Most likely, but I can’t be the only one out there; after all it would seem this line of thinking is what brought The Hoarder to the screen.  In the new horror release we get to discover there is more to fear than a few old dust bunnies when venturing out to the local storage unit; in fact it can possibly turn into a trip you may never return from.

Ella (Mischa Barton) is having doubts about her current boyfriend; they are the kind of doubts that lead her to believe he has something to hide in his storage unit.  After she’s swiped his card key to the unit, Ella drags her best friend Molly (Emily Atack) along to see what all they can find.

Just how creepy can a storage unit facility be?  It was something I wasn’t sure if the filmmakers would be able to pull off; after all, it’s really just a bunch of long corridors with several doors and on several floors. Well, it doesn’t take long to find out. The Hoarder wastes no time getting into the story and jumping into the horror as Ella accidently releases a man/creature loose in the facility.

Despite being late at night, there are numerous other people at the storage facility, each character with their own agenda within their unit.  The ragtag group is forced together to figure out a way to survive and escape the darkened halls of the facility.  The characters seem to fill in their roles more as possible victims rather than really being distinct characters beyond the drug addict, the squatter, and the dirty cop.  I don’t say this in condemnation, but instead it’s fun to see a movie that is here to entertain us like the fun slashers from the 80s.

What director and co-writer Matt Winn delivers us is a little more than a slasher, though, and what is most impressive is the decision to shoot this NOT as a found-footage film.  I remember the times when horror fans would complain about a “slick”-looking film, but for me this is more than welcome as we actually have a film that builds suspense and tension rather than make the viewer nauseous.

The Hoarder is fairly straightforward and is the kind of movie that actually delivers a good time.  The simple, yet unique locale offers the viewer a fresh experience as the maze of hallways manage to become a character as well and every corner sets us up for a jump scare. As for the reveal of what is lurking the halls and is dispatching our struggling survivors is all the more frightening because of the real world possibility that this could occur.  It’s a film not attempting to reinvent the wheel, but instead it’s a film that is worth a watch with the lights dimmed and late at night.

Brent Lorentson is a horror writer and film critic based out of Tampa, Florida. With a BA in Digital Film, he co-wrote and co-directed Scavenger Hunt. His short stories have appeared in various horror anthologies. In 2019 his short script Fertile Blood will be a part of the anthology horror film Slumber Party. He is currently working on his first novel A Dark and Secret Place set to be released in late 2019. Favorite Films: Taxi Driver, Fight Club, I Saw the Devil, The Wild Bunch, Dawn of the Dead, A Clockwork Orange, Pulp Fiction, Heathers, The Monster Squad, and High Fidelity.
Expendables 3 (UHD Blu-ray) (4K) Pay Back