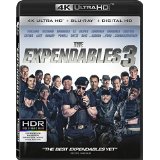 Welcome to the world of 4K UHD Blu-ray. This is our first 4k review. It won’t be the last.

“How much we getting paid for this?”

The first two movies grossed more than $575 million worldwide. Most of that money came from outside the U.S., and I’m sure that can largely be attributed to the international appeal of foreign-born franchise stars like Jason Statham, Jet Li, Arnold Schwarzenegger, Dolph Lundgren, and others. Of course, it also helps that you really don’t need to be able to understand English to enjoy an Expendables movie. In fact, Expendables 3 leaned more heavily on foreign receipts than the previous two entries; only $39 million of its $206 million global take came from the U.S.

In fact — Willis notwithstanding — it seems like these guys are genuinely having a great time kicking butt on the big screen 20 years past what’s supposed to be their prime. (I mean, even Harrison Ford cracks a smile, for crying out loud!) At the very least, The Expendables 3 is “in” enough on the joke to make a Wesley Snipes/tax evasion joke about two minutes after I’d thought of my own.

In almost all my reviews, I’ve long described the movie’s plot by now. You’re not going to believe this, but the plot of The Expendables 3 really doesn’t matter that much. All you need to know is Expendables leader Barney Ross (Stallone) is feeling increasingly weary about the fact that his elite group of mercenaries (Statham, Lundgren, Randy Couture, Terry Crews) has become depleted. The film opens with a daring breakout of a whacked-out former colleague named Doctor Death (Snipes), but Ross and Co. eventually come face to face with presumed-dead arms dealer Conrad Stonebanks (Mel Gibson), who also co-founded the Expendables. Stonebanks seriously wounds a member of Ross’s team. (You can probably guess which one became “expendable” with the addition of Snipes.) Feeling responsible for the rest of his team’s safety, Ross sets out on a mission of revenge with a new squad.

With help from a colleague named Bonaparte (Kelsey Grammer…wait, Kelsey Grammer?!), Ross recruits a new, younger team. The JV Expendables are played by a mix of actors (Kellan Lutz, Glen Powell) and non-actors (MMA star Ronda Rousey and boxer Victor Ortiz, both as stiff as you’d expect). Not surprisingly, Ross’s new mission doesn’t go totally smoothly, so the new-school and old-school Expendables — along with a few old friends — team up to take down Stonebanks and his private army.

Stallone is a fine anchor — and he shares especially nice chemistry with Statham — but my favorite bits involved seeing charismatic performers who’ve been away from the limelight take center stage. I got a particular kick out of seeing Snipes command the screen again when given the chance. (He’d only been out of prison for a few months when The Expendables 3 started filming.) Gibson, who took on a similar, more cartoonish villain in Machete Kills last year, is a major asset. He brings the same deranged energy that helped make him an offbeat action/comedy star in the Lethal Weapon movies to Stonebanks; Gibson is also (easily) the best, most magnetic actor to antagonize the Expendables so far. Grammer seems like an outlier until you remember it makes perfect sense to cast a gifted comedic actor in a role that’s supposed to draw laughs. I haven’t even mentioned Antonio Banderas; he plays a chatty mercenary who is as thrilled to be a part of the team as I imagine these actors are to be in a major summer movie again.

The theatrical cut clocks in at 126 minutes, which is a little flabbier than any of the Expendables are allowed to be. (More on the Unrated Edition a little later.) The film is also a loud throwback that is sneakily savvy about its dumbness.

The Expendables 3 is presented in an aspect ratio of 2.40:1. The 2160p image is arrived at with an HEVC codec. Unfortunately, the Samsung players do not indicate bitrates. I’m looking forward to the Oppo player, hopefully later this year.  The film was shot in Bulgaria, and the predominant palette is desaturated and gritty. Just as in the Blu-ray, the UHD image is at its most impressive when it’s giving us extraordinarily fine detail on close-ups. (The gray in Stallone’s hair, every hard-won line and crease in the older actors’ faces.) The black levels were not as impressive as I expected here. It’s likely that the source material also contains the rather murky blacks found here. The most impressive aspect of the 4K image has to be the illusion of depth the image provides. This is likely why 3D might be falling away. These images provide such clarity that your eyes are tricked into perceiving actual depth. The water the final fight occurs in at the climax is one of the best examples of this clarity and ultra-realistic presentation.

You get the new DTS:X audio mix here which defaults to a 7.1 track for most systems. It sounds pretty much the same as the Blu-ray track, and in side-by-side comparisons I really didn’t get any change going back and forth between the audio presentations. That’s not a bad thing. The original audio was pretty solid.  The presentation is as muscular as the Expendables themselves and as explosive as the action in the film. But on top of simply being loud, there’s some dynamic work here for any action movie connoisseur. For example, the subs don’t just rattle the room when a grenade goes off; the sound reverberates throughout every speaker. Sound (particularly helicopters and motorcycles) travel fantastically from the front to the rears and vice versa. The only minor quibble is an almost complete lack of immersion during the non-shooting scenes. (Fortunately, there aren’t very many of those.) You could excuse the dialog for getting lost in all the mayhem, but even the quippy one-liners come through clearly in this terrific track.

The Expendables 3 is clearly and intentionally over the top in every way, but I’m surprised to say I enjoyed it even more than the previous loud, dumb offerings in this series. And as far as the action heroes who come out to play this time around, it’s “great to have you back”.