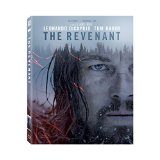 We’ve got a bear of a Round Up for you this week, my friends! Leonard DiCaprio tussled with a vicious grizzly and took home his first Oscar for The Revenant. And now, thanks to Fox, we’ll bring you a Blu-ray review of the hit survival drama. Lionsgate also engages in some gross Misconduct, while Entertainment One seeks safe Haven: The Final Season. HBO plays second fiddle with Veep: Season 4 and innovates in Silicon Valley: Season 2. Comedy Central brings back Daniel Tosh: People Pleaser, while Magnolia Home Entertainment lampoons an iconic magazine/comedy brand with Drunk Stoned Brilliant Dead. Finally, Warner Bros. schemes with Pretty Little Liars: Season 6.

Everybody Wants Some Silicon Valley: The Complete Second Season (Blu-ray)