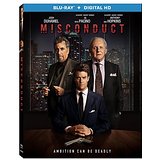 There’s a grand, lurid tradition of cinematic saps who think with the wrong head and get themselves in a heap of trouble. Misconduct tries to tap into that spirit while also mimicking none other than Alfred Hitchcock and Brian De Palma (who was pretty much mimicking Hitchcock himself). Those are some lofty goals, but — at least on paper — Misconduct has some heavy hitters on hand to help achieve them. Unfortunately, this legal thriller is guilty of sloppy, nonsensical storytelling and largely wasting the talents of a pair of screen legends.

Ben Cahill (Josh Duhamel) is an ambitious, morally flexible lawyer who works long hours, which has put a strain on his relationship with wife Charlotte (Alice Eve). Ben perks up when college girlfriend Emily (Malin Akerman) contacts him out of the blue wanting to get together. Turns out Emily works for/is involved with pharmaceutical magnate Arthur Denning (Anthony Hopkins), who is currently in the news due to some unethical drug trials. Emily claims to have evidence of Denning’s wrongdoing, so Ben — recognizing an opportunity to jumpstart his career — offers his lawyerly services with the hopes of impressing senior partner Charles Abrams (Al Pacino).

Misconduct follows that familiar setup with equally recognizable thriller tropes like kidnapping, adultery, blackmail, and murder. The script by Simon Boyes and Adam Mason tries to inject some intrigue into the proceedings by opening with a botched extortion attempt and turning the clock back a week to show the events that led up to it. The problem is that early sequence — a money exchange at an art gallery — turns out to be relatively inconsequential since we only briefly revisit it about halfway through the film. The bigger problem is that practically everything follows that scene — especially the multiple twists at the end — is either eye-rollingly ludicrous or infuriatingly dumb.

At least first-time director Shintaro Shimosawa tries to liven up the proceedings with elegant, ridiculously baroque direction (including meandering lateral tracking shots) that gives Misconduct some style. It’s so over-the-top that it occasionally threatens to elevate the story into enjoyable melodrama. Unfortunately, those flashy directorial touches ultimately feel overwrought in the service of a such a misguided mess.

The thing is I can actually see what the filmmakers were going for here: Misconduct is a throwback to twisty neo-noirs like Body Heat and (especially) Presumed Innocent, or any number of movies Michael Douglas would’ve starred in during the ’90s. Josh Duhamel, sad to say, is no Michael Douglas, so Ben makes for a pretty bland patsy. Duhamel neither leans into Ben’s bad boy tendencies nor does he give us a hero worth rooting for. Misconduct also squanders the two living legends in the cast. Hopkins makes a forceful impression early on, but he disappears for large swaths of the story…and when he does re-appear, he looks sluggish and disinterested. Pacino — who has recently turned in fine, subdued work in indies like Danny Collins and Manglehorn — goes back into ham sandwich mode, especially in his final scene.

The talented supporting cast doesn’t fare all that better. The mild exceptions are Akerman, who makes for a fetching (if lightweight) Hitchcockian icy-blonde femme fatale. I also enjoyed the light touch Glen Powell brought to his scenes as Ben’s lawyer buddy. On the other hand, Eve looks like she took an Ambien before every one of her scenes. (I get that Charlotte and Ben share a past trauma, but the actress doesn’t convince us that there was ever life in the character’s eyes.) Julia Stiles shows up to look tough as a private security contractor Denning hires, but doesn’t make much of an impact.

The worst is Byung-hun Lee, who plays a menacing wild card known as The Accountant. His character periodically shows up to deliver barely-veiled threats, but he unintentionally winds up representing the movie’s dour, poker-faced ridiculousness.

Misconduct is presented in an aspect ratio of 2:40:1. The 1080p image is arrived at with an AVC MPEG-4 codec at an average of 20 mbps. This is a clean presentation to be sure, but the fine detail is not quite as exacting in places like Denning’s opulent home (or even in Emily’s chic loft) as you’d expect. Director Shintaro Shimosawa and cinematographer Michael Fimognari certainly play up the story’s noirish elements, and there are some inky black levels and nice separation to be found. Unfortunately, those instances are often followed by interior scenes that display murkier black levels. Misconduct features a golden/yellowish hue that is notably broken up during a blue-tined visit to a nightclub. For a movie with some high-class, ostentatious touches, the visual presentation is slightly underwhelming.

The DTS-HD Master Audio 5.1 track makes a strong first impression as the first dramatic strings of Federico Jusid’s Bernard Herrmann-esque score play out. (That music is another nod to the movie’s Hitchcockian aspirations.) The score occasionally coaxes some rumbling out of the subs, but the brief nightclub sequence is the only time the track’s bottom end comes to life. Surround activity in the rears is muted, which is a bit of a letdown during outdoor sequences in the busy city.

The Making of Misconduct: (15:08) Cast members discuss their characters and the Hitchcockian/throwback aspects of the story. The younger actors (Akerman, Stiles, Duhamel) appropriately fawn over working with living legends Pacino and Hopkins while praising their work ethic and generous spirit. Hopkins also has kind words for first-time director Shimosawa.

Deleted Scenes: (3:26) There are only three scenes here, and the best one shows Ben at the height of his paranoia during the movie’s ludicrous latter half. Nothing here that would’ve improved the final cut. Features a Play All option.

Don’t be fooled by the marquee names above the title. I can only recommend this to the most fervent Pacino/Hopkins completists.

In the end, the most egregious case of Misconduct here is the misuse of such an accomplished cast on such a silly, derivative story. The movie isn’t exactly boring, but it also doesn’t even have the energy or (lack of) decency to be as fun as some of the legal/erotic thrillers that it tries to channel.

Crossing Point Have Gun Will Travel: The Complete Series